There are some quests in The Witcher 3 that call on Geralt to take on the role of a sleuth – that is, follow some trails of clues to solve mysteries for the weird and wonderful folk of The Continent or move ahead in the open-world game’s story. While the in-game journal does a pretty good job of recording where you’re at in a quest, a new mod could make progress tracking even easier.

Modders Wolfmark and ClickNine’s ‘Dialog Log’ mod for CD Projekt Red’s RPG game saves all the chatter that pops up over the course of Geralt’s adventures, including NPC speech and dialogue from cinematics. The mod records the previous 500 ‘messages’ that have appeared, which you can then display using a pop-up window in the game. This shows how long ago the speech occurred, and handily separates out entries from NPCs and “main characters”.

While, sure, it’s likely to get cluttered with the endless babble, chit-chat, and coughs that NPCs effuse in crowded spots like Novigrad, when out in the wilds trying to crack a case, it’s easy to see how the mod could be hugely handy.

An example included on the mod’s page (as you can see below) shows Geralt’s recorded mutterings about a mystery he’s trying to solve involving a murder and a trail going cold. Just try to ignore the fact that the good witcher’s in his knickerbockers for some reason. 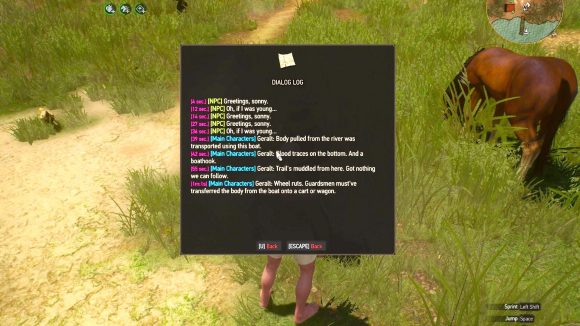 His findings – a body being transported by boat, blood traces on its hull, wheel ruts from a wagon used somehow – might get a little lost in the mix if you’re dipping in and out of the game or distracted by bands of nekkers that keep trying to swamp you. But, with the recorded dialogue, it seems it would be far easier to keep up with each clue in the trail rather than having to dig out and decipher the in-game journal to check progress all the time.

Or, you know, you could just keep reliving those lovely little snide retorts Yennefer generously sends Geralt’s way in the game over and over. Your choice.

If you’re keen to give the mod a go, you can find it at Nexus Mods here. Be sure to follow the modders’ instructions to get it up and running smoothly, and as ever, mod with caution! Oh, and do take a peek at our rundown of the best Witcher 3 mods while you’re here, too.