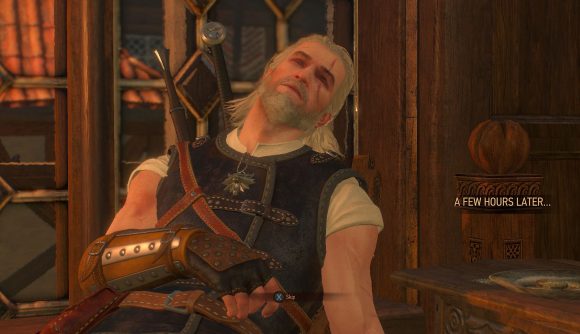 If you’re a fan of The Witcher 3, you’ll be familiar with – and probably fondly remember – a quest called No Place Like Home. It sees the White Wolf and his childhood witcher chums knock back more than a few tipples, have a lovely catch-up, and get up to various drunken shenanigans, depending on when you decide to call it a night. It’s a great quest, giving us a look at our fearsome hero’s sillier side. But, if you’d prefer Geralt keep his head clear for The Path ahead, a new mod might be just the thing.

Titled ‘No Drunk Effect’, the new Witcher 3 mod by creator Carlitox25 combats the effects incurred by consuming the RPG game’s many delicious alcoholic beverages. Put simply, “this mod disables the drunk effect when you drink alcohol,” the modder explains.

So, whether your choice of hooch is a pint of Redanian lager, glass of Beauclair white, or a nice Sansretour pinot noir, this mod means Geralt won’t be able to tell it from a flagon of goat’s milk. Nice.

Though the mod’s description doesn’t go into detail on how it works, it sounds like you won’t see the hazy, intoxication effects that cloud the open-world game’s screen when Geralt’s had one too many, or signs of impaired judgement. Losing his jolly, post-tipple singing would be a shame, though.

If you’re keen to keep Geralt sober, hangover-free, and ready to slay some monsters at a moment’s notice, you can find the No Drunk Effect mod on Nexus here. We also have a handy list of the best Witcher 3 mods already out there if you’re keen to tinker with your game some more.