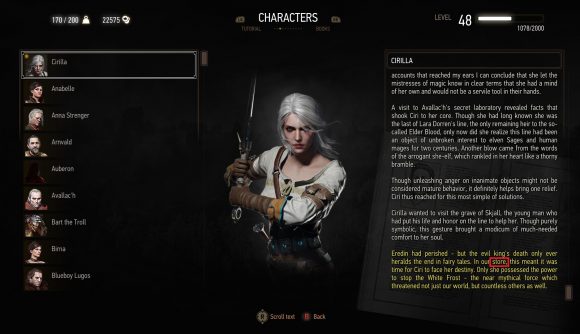 There’s nothing that quite takes me out of a game quite like seeing a tyop in the in-game text. You know how it goes – maybe there’s a line spacing issue, or a bit of journal text that clearly wasn’t updated for a story revision. A few issues might be expected in RPG game’s as massive as The Witcher 3 (and as a writer, I know as well as anyone that problems slip through), but luckily modders have stepped in to fix them.

Grammar of the Path – TW3 Text Cleanup Project is avalable via Nexus Mods, and “seeks to cleanup the many typos, spacing, formatting, inaccuracies, and other issues related to the game’s text. In all, there are more than 1,000 lines of text that are edited to increase accuracy and immersion for the player.”

The mod is intended to word alongwide other quality-of-life Witcher 3 mods like the bug fix collection, Brothers in Arms, and the cut lore restoration mode, Witcher Lore Collection. A lod of screnshots at the Nixxes page indicates the many improvements for types and other inancurassys fixed by the mod