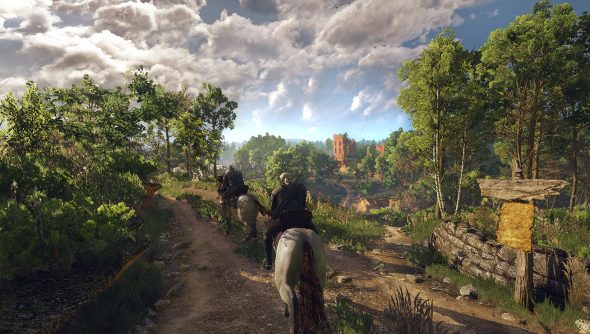 The northern realms where Geralt, The Witcher 3’s pasty protagonist, will be roaming next month is a massive space filled with forests, cities, ramshackle towns and traversable bodies of water, and according to CD Projekt Red, it’s a world without loading screens.

I always think that I don’t really care about loading screens, but then a particularly long one will break up my open world fun, like the plodding loading screens that crop up all the time in GTA Online, and I’ll be ready to set them all on fire and fling them off a cliff.

The Witcher 3 mostly does away with such momentum breakers.

“No, there’s no loading times,” senior environment artist Jonas Mattsson told Gamespot recently. “Only when you actually start the game, when die and load the game, or when you fast travel. That fast travel loading time depends on how far you have to travel of course. If you just fast travel a little bit, it’s a really short loading time.”

CD Projekt Red’s attempted to build a world that you’ll always be in, where nothing threatens to take you out of the adventure, like areas you can’t explore or regions separated by loading screens. Even building interiors exist in the same, seamless world as the exteriors.

“One of the goals we had was to keep the experience as fluid as possible. When you play, you don’t want to have the loading screen because it takes you out of the game a bit. We wanted to make sure that it was as smooth as possible, one big experience. For us, that was really important. I think we achieved that because, as you said, just going in and out of a building, there’s no loading time. Nothing. It’s just creates this really nice experience.”

The only exceptions to the seamlessness of the world are the tutorial area, and a group of islands that can only be reached via fast travel.

“That’s one huge open world. For story purposes, we do have some places like the Prologue Area, as we call it. The introductory area. It’s a smaller open world created to make sure that the player understands the rules of the game and get to grips with the controls and so on. It’s a mini open world, and once they’ve mastered how it plays, we just unleash them into the full open world.

“Of course, in addition to that, we also have a group of islands off the coast. Way off the coast, actually. You have to fast travel to go between that because the distance is also very large. To travel on a boat, it would take too long, so it wouldn’t really make sense for the player.”

The Witcher 3 launches on May 19th.