May 19th isn’t very far off, is it? But it’s far enough away that we still need to get our Witcher 3 fix through trailers. The good news is that the latest trailer from CD Projekt Red is a big one, five minutes long, and covers every element of the open-world RPG, including bra removal magic and getting insulted by burly tavern patrons.

The overview probably won’t tell you much more than you already know if you’ve been following the game, but it’s a good way to see the breadth of the game, and there’s a lot of new footage.

But what, exactly, is going on here: 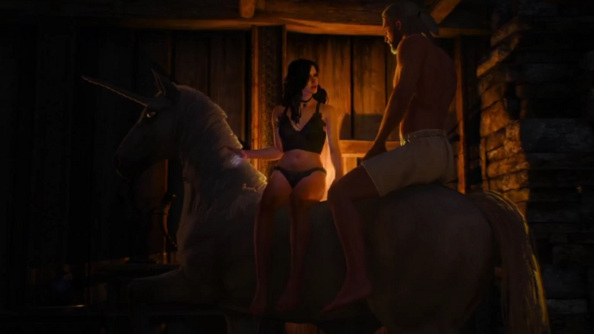 It’s like the cover of some terrible (brilliant) fantasy romance novel, and we all know that old Geralt has inexplicable luck with the ladies, but everything about this short scene is baffling me.

First off: the unicorn. We don’t know where the scene is going to go, but I think that it’s a safe bet that there’s going to be some fluid swapping going on. I want to know how the unicorn is involved. I’m going to be absolutely clear here: it’s not okay to use a fictional fantasy creature as a piece of furniture, especially if that piece of furniture is also something you’re going to bang on. Where is the fantasy equivalent of PETA when you need them?

On closer inspection, the unicorn isn’t even moving. It doesn’t even blink. Has some sort of stasis magic been used to make it stay still for the shagging ritual that its riders are about to embark upon? Maybe it’s not even alive. Is that better or worse? Let me know in the comments if you’ve ever had sex on top of a stuffed animal and how bad you felt about it after.

Then there’s the bra removal spell. Where does the bra go? It looks like it’s being burned away by magic. Does it reappear later? Or is it simply gone? How much does that woman have to spend on clothes?