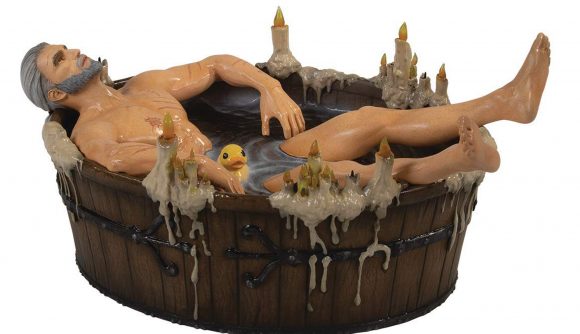 The Witcher 3 brought us one of the steamiest gaming intros of all time – both because of its notable nudity, and the literal steam rising out of the bathwater of protagonist Geralt. Now the sexiest game moment of recent memory has been immortalised in plastic, and you can now put a naked Geralt on your shelf for the low (?) price of $79.99.

No, this isn’t a joke. (Not like when a bathtub Geralt figure made our April Fools roundup in 2017.) The new figure is part of Dark Horse’s Witcher 3 series, which has previously featured a number of favourite characters in more action-oriented, fully-dressed poses. I’ve got the Ciri figure from that set, and it’s been a delightful desk buddy, even if it’s not quite as lavishly detailed as pricier collectable statues tend to be.

But Ciri is no naked Geralt, and the ‘Geralt in the bath statuette,’ as it’s officially called, will be available on Wednesday, May 29. Here’s how the official description goes: “Originally an in-game scene, turned internet meme, turned CD Projekt Red April Fools joke, the demand that this brought to life from Witcher fans became too great to bear.”

You can pre-order the statue over on Amazon at a small discount. Naturally, this news comes to us via PC Gamer – the outlet’s tireless evangelisation of bathtub Geralt has been an inspiration to us all.

Our Consumer Business Analysis and RNG Divisions are thrilled to announce a new, unique and exclusively limited figure of Geralt! pic.twitter.com/FLTTwO1RHc

Let this be a lesson in never joking about a product on the internet, because fans will want to buy it eventually.

Related: Get into the best sex games on PC

Sadly, I couldn’t talk the PCGamesN bosses into letting me expense the statue for, er, research, so you all will have to enjoy your bath time Geralt adventures without me.