May 19, 2020 This feature was originally published in 2017 as part of our ten-year anniversary celebrations for The Witcher.

Crossroads have been a fixture of The Witcher for ten years – present in quest names, implied by the signpost markers on Wild Hunt’s map, and of course, seen everywhere in the meandering highways of the games themselves. They have become the defining image of a Slavic fantasy tale in which adventure lies just down the road. A series which began, fittingly enough, with a fork in the path.

CD Projekt had existed since 1994, as a distributor importing CD-ROMs into Poland. The studio’s job was to localise games like Baldur’s Gate, and it was not an easy one. The company was competing with the huge free market that held sway in Warsaw at the time – selling PC games to an audience unaccustomed to paying.

They were successful enough that Interplay agreed to let CD Projekt port Baldur’s Gate: Dark Alliance to PC. Shortly afterwards, however, the publisher succumbed to financial troubles. This opened up an opportunity. Having already assembled a team of PC developers, CD Projekt decided to take an alternative path – a brand new RPG of its own.

The Witcher world might have seemed like an odd choice to an international audience, but to this Polish team it felt entirely obvious.

“We were working on a dream IP for every fantasy fan in Poland,” game director Konrad Tomaszkiewicz explains. “Andrzej Sapkowski, the writer responsible for The Witcher books, is as popular in Poland as J.R.R. Tolkien. For us, working on a videogame based on his character was a massive adventure on its own.” 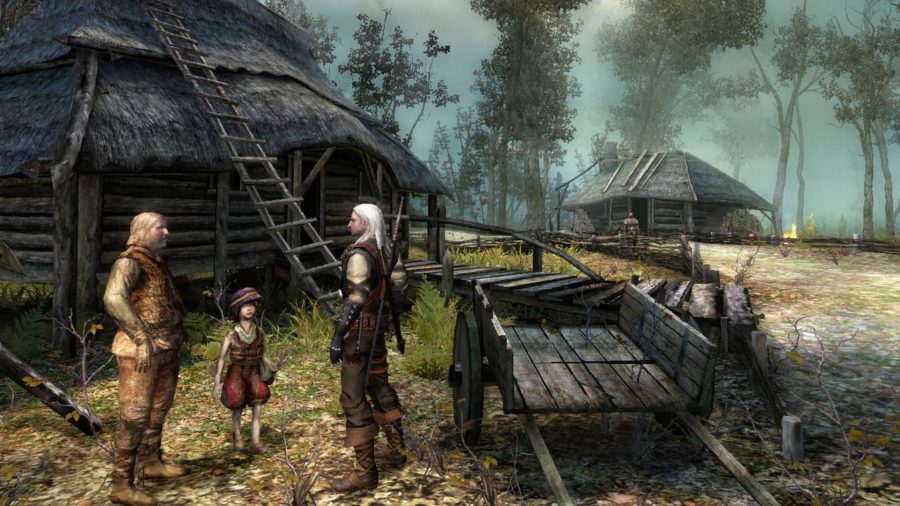 Building on the foundations laid by Sapkowski, it soon became apparent that The Witcher would be a uniquely Slavic game. Mainstream RPGs were, and still are for the most part, Anglo-Saxon affairs – stories about brave knights and young adventurers setting out to slay the dragon. But CD Projekt Red’s roots were different.

“In Slavic mythos, adventure is around the corner – in a nearby forest, where something dark feasts on nearby villagers, or at an infamous crossroad, where people disappear at night,” Tomaszkiewicz says. “That’s visible even in The Witcher 3 – although you do travel, your travels are your adventures, and not the means to have one.”

Folklore was not the only way in which The Witcher stood out from its peers. CD Projekt Red’s first game was developed in a period where other RPGs felt compromised – by both the move to 3D and publishers who insisted on a console focus. By contrast, developers like Tomaszkiewicz had grown up on a diet of isometric classics like Baldur’s Gate, Planescape Torment, and Icewind Dale. And they were working on PC alone. 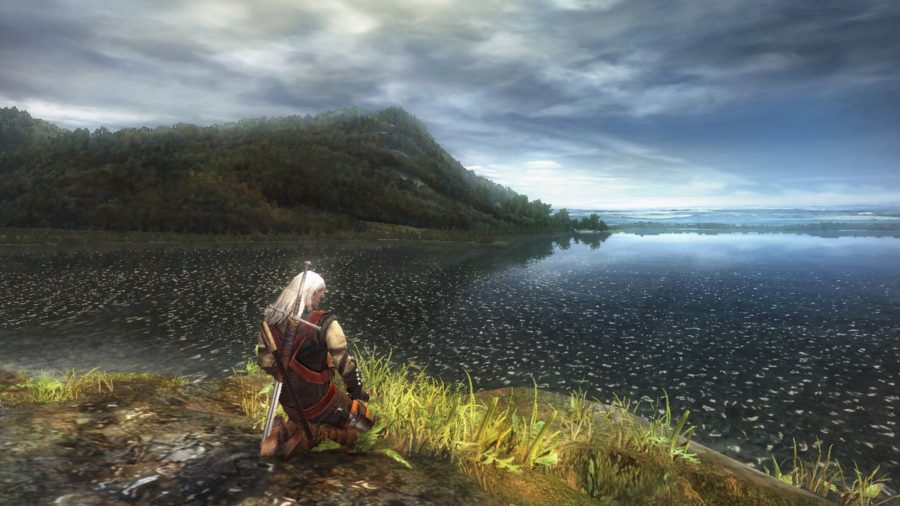 “While PC role-playing games were often pretty hardcore, the console market was rather dominated with JRPGs, which were entirely different,” Tomaszkiewicz recalls. “Had we decided to make a console game, it would have probably been more action-oriented, with less focus on itemisation, inventory management et cetera.”

Leaning on its existing relationship with BioWare, the Witcher team licensed Neverwinter Night’s Aurora engine. It is still recognisable in the 2002 demo that CD Projekt pitched to publishers – a slightly static isometric RPG, minus Geralt. But by the time they were finished, the team’s programmers had rewritten the majority of the code.

In an era when players were used to accepting a certain amount of shonkiness in their RPGs – especially in comparison to contemporaries in the FPS genre – The Witcher was polished, beautiful, and deeply atmospheric. The bustling, Tudor-style city of Vizima and the swamp across the lake, populated by strange, slick drowners best combated with fire, delivered a sense of place that has become synonymous with the series since.

“It ties into what I said about the Slavic mythos,” Tomaszkiewicz says. “If adventures are connected to places, rather than the journeys that lead to those places, they have to be special. An environment needs to have its own character, it needs to be alive in a sense, to be believable and memorable.” 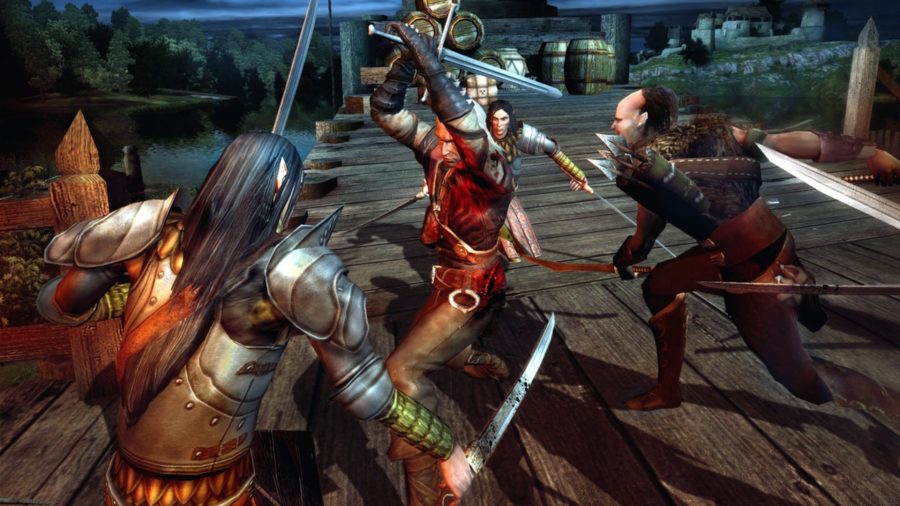 None of which is to say that The Witcher was an unmitigated triumph. It is still infamous for its ‘romance cards’ – icky rewards granted to Geralt for getting his end away with a variety of female NPCs – that CD Projekt Red does not look back fondly on.

“I’m not missing them, if that’s what you’re asking,” story director Marcin Blancha says. “Game dev has grown a lot for the past ten years.”

Out of the way Geralt: Why Ciri should lead The Witcher 4

CD Projekt Red has grown since, too, becoming one of the industry’s leading lights. But at the time they were very much learning on the job. Borys Pugacz-Muraszkiewicz, the game’s English adaptation director, describes a “near-vertical” learning curve when it came to voice acting.

“We were – dare I say it? – novices. We had a few ideas, but no clear sense of how far we could or should go to ‘design’ things, work them out in detail, impose some sort of vision,” he says. 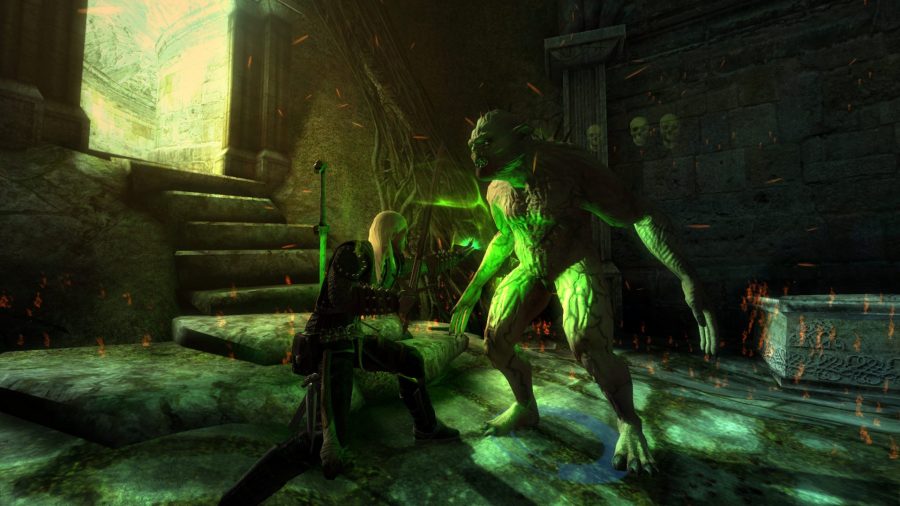 The team spent very little time planning out The Witcher’s array of British accents before recording. Downtrodden but proud elves would speak in Received Pronunciation, they knew, while dwarves would be jolly, ribald, and Scottish. “The decisions we made at the time, the broad strokes, worked out well in the end,” Pugacz-Muraszkiewicz says.

Blancha remembers the development of The Witcher as a series of challenges that were “sort of hurdle and a disaster at the same time.” But it felt like pioneering, too. “When we started making games, everything was entirely new. We often asked ourselves the question of, ‘How the hell should we approach this?’, or, “Will this even work?’.” And we worked hard on making that happen,” he says.

“After three games and two expansions this feeling evolves. You’re no longer wandering in the dark and you become way more coordinated. You’re not discovering continents anymore, you’re settling in – making bridges to cross rivers and building skyscrapers, which is a challenge on its own.”

That first game will forever form a key chapter in CD Projekt Red’s story, however – a very Slavic adventure into a dark forest, where a studio found its identity.