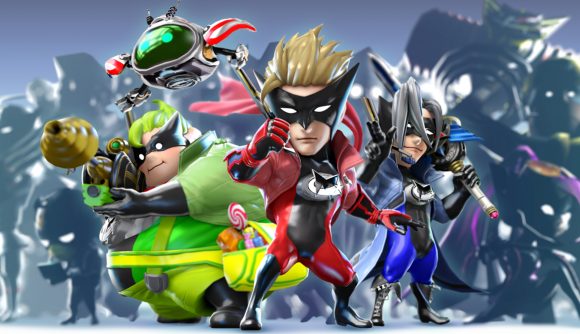 Platinum is best known for the likes of Bayonetta and Nier: Automata, but the studio’s cult following is so vocal that it’s tough to called any of its releases truly obscure – even if they didn’t all sell super well. One of the company’s infamous underperformers was a delightful Wii U exclusive called The Wonderful 101 – and now, the developer is taking advantage of Kickstarter to give the game a second chance.

The Wonderful 101: Remastered just went live on Kickstarter. Platinum sought an initial goal of $50,000 USD to bring the game to Switch, and that target was met in minutes. The first stretch goal of $250,000 will bring the game to Steam – and unless the donations fall off completely well before the end of the campaign on March 6, that goal will be easily met.

Digital copies of the game are set to begin distribution in April, which suggests that the ports have already been in development (and the official FAQ says the “core content” is “already established”) – though it’s unclear whether the PC version will land alongside the Switch release.

Either way, it’s notable to see The Wonderful 101 reach non-Nintendo platforms, as Nintendo published the game on Wii U. Studio head Atsushi Inaba tells VGC that W101 is “an exclusive case,” and it’ll be Nintendo’s call whether games like Astral Chain follow suit. (Coincidentally, Daemon X Machina is coming to Steam – another former Nintendo exclusive, but one which the publisher only handled in regions outside Japan.)

The new remaster will feature some changes over the original, as director Hideki Kamiya says in the same interview. “Basically, I wanted to take a lot more care to modernise it. This is a detailed thing, but for example when a character levels up I wanted it to have a little more meaning. In the original, users were probably a bit confused when a character levelled up and didn’t understand what they could do. I wanted players to understand the more detailed things in the game so that they could have an overall more enjoyable experience.”

After the Platinum 4 tease earlier today, this is the first thing the company has officially unveiled – apparently, the name refers to four separate projects Platinum is undertaking. Hopefully, our list of upcoming PC games will continue to swell with the remaining three efforts.