The new processor cooler from Thermaltake does something most others don’t: actually look cool. It’s a super low-profile chip chiller using a kind of impeller design with one heatsink spinning around inside another.

Thermaltake, as their name might suggest, have taken the thermal design from an old prototype cooler from Sandia National Laboratories. The Sandia Cooler first appeared in 2011 promising to be able to deliver more efficient heat transfer by ditching the ‘dead air’ which sticks to fan blades using a centrifugal pumping effect. This was meant to produce better cooling from small form factor CPU coolers.

Which is precisely where Thermaltake’s Engine 27 comes in. Measuring a paltry 27mm in height it’s been specifically designed for small form factor PCs to deliver cooling without taking up most of the chassis.

Like a standard air-cooler a heatsink is mounted directly atop the processor, but with tiny gaps in the base to help transfer the heat up into the spinning metallic fan sat within the heatsink. The blades on the metal fan push air through the heatsink subsequently creating a vacuum which then pulls fresh cooling air in. 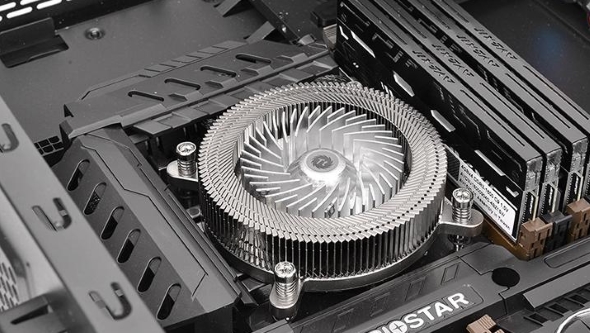 If you were hoping to drop this onto your overclocked i7 though you will be disappointed. Despite being compatible with the LGA 1156, 1155, 1150 and 1151 Intel CPU sockets, the Engine 27 is only rated to cool up to 70W. The 91W i7 6700K then is out, though a stock-clocked Core i7 6700 would be fine. You can forget the higher-spec LGA 2011 server-styled processors too, but that’s why we’ll liberally splash liquid around our PCs to keep them cool.

“Although now we mainly focus on developing new liquid-cooling products, air cooler still play an important role in our product portfolio,” said Thermaltake CEO, Kenny Lin. When you’re looking at small form factor machines you’ll struggle to fit a pump and radiator combo in there anyways, no matter how hard Cooler Master try, so improving the efficiency of air coolers is still a smart way to go.

In terms of its acoustic performance Thermaltake reckon the Engine 27 will be between 13 and 25dB, which does put it on the quiet side of cooling, though not significantly quieter than anything else around at the moment. It is though ridiculously mini, with a profile smaller than most sticks of RAM.

Unfortunately though, despite claiming it’s now on the market, the Engine 27 isn’t widely available yet and we’re still waiting on a price.