If there’s one thing that Titanfall understands, it’s that every game is automatically better with a deck-building mechanic. Doesn’t matter what the genre is: give me a deck of collectible cards and I will immediately start lavishing it with care. This is not something I expected from a giant robot shooter, but it’s one of the most welcome surprises so far.

It’s a simple enough system. After you level up a few times, you get access to Burn Cards. These are single-use power-ups that you can take into battle. You deck can hold up to 25 cards at at time, but you can only take three into each round. The drop rate is fairly generous, so it’s not too long before that deck starts running up against its size limit and you have to start choosing what to keep and what to discard.

If you know what you’re doing, the Burn Cards can be tremendously powerful. They confer buffs that do not go away until you die. So if you use an “amped” weapon card, on your next spawn you will have a supercharged version of a standard weapon in the game. As long as you stay alive, your weapon is dealing more damage. Since I’m best with the standard assault rifles, I usually bring one or two amped rifle cards into each game. It’s a huge advantage: while it doesn’t turn weapons into one-hit killers, it does skew every encounter just a little bit in your favor.

I also love the variety of these cards. You can play a card the speeds up the arrival of your next Titan by cutting 80 seconds off the waiting time, or you can play another card that increases the speed of Titan construction with every AI-controlled Spectre you kill. The former is a one-off boost, but the latter has “teach a man to fish” potential provided you can just keep from getting gunned down while you farm robots. Another card reveals the minimap completely, so that you won’t be caught unawares, but another gives you prosthetic legs that makes you zip around the map much faster.

Since you can only bring three cards into battle, it pays to take some time between rounds to consider your options and the setting for the action. This brings me to another point about Titanfall: how well its maps encourage different types of play. 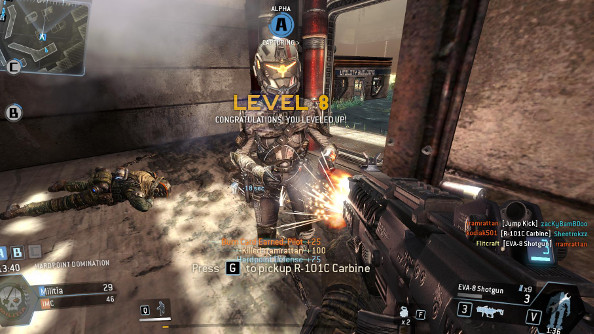 None of Titanfall’s 15 maps share many similarities. Some allow for lots of clear fields of fire that favor long-range engagements, while others are so dense and vertically layered that most combat takes place in savage, short-range encounters. Some can be dominated by Titans, and others are robot graveyards for the unwary.

This is great news, because Titanfall keeps pushing me out of my comfort zone. I’m one of those guys who has one or two styles that I always gravitate towards. I tend to like medium-range rifles and machine guns, and try to find good positions where I can camp for a while and rotate between two or three shooting positions. This is me in just about every team shooter.

On some maps and game modes, Titanfall is cool with that. Angel City is made for that kind of play, with a nice mix of roomy buildings and commanding fields of fire. In Hardpoint games, I can defend a capture location and just bag kill after kill. But inside the crashed starship on Relic? Camping gets you killed because there are blind corners everywhere, and most gunbattles will take place at point blank range. The shotgun and SMG reign supreme here, and victory goes to the twitchiest shooter of them all.

Even within maps, there are certain locations that demand different loadouts. If you’re holding the Research Lab on Boneyard, you have to be prepared for close-quarters battle, but just across the map at the Marvin Building, Titans and riflemen carry the day. Even between spawns, it pays to think about what you want to do and where you want to go.

This has not been entirely good news for my stats. There are about four maps where I’m really competitive and a lot where I am varying degrees of useless. But it’s also made soldier and Titan customization far more meaningful than I ever expected. 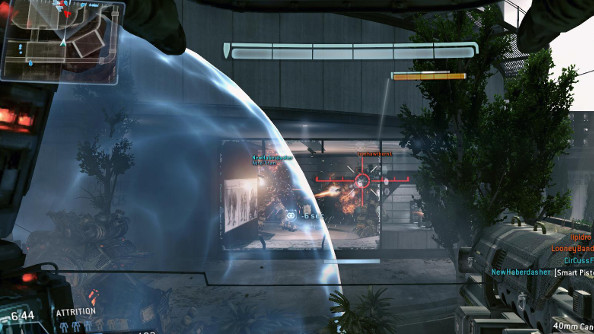 I should also add that I’m warming up to Titans a bit. I’m started to realize that they really are skill weapons in a lot of ways. Their tankiness is a deception, it’s really their hitting-power that matters. If you can keep enemy Titan at bay and chip down their health, the arrival of more friendly Titans will turn the battle in your favor and provide a huge amount of map control. If your reflex shots are good enough, then any infantry who show their faces while you’re in a Titan are easy kills.

A final point: while I’ve spent most of my time in Hardpoint, where my limitations can work to my team’s advantage as I defend capture locations, I suspect capture the flag might ultimately be the mode with the greatest competitive longevity. It is simply bonkers, with both teams flags usually on the run at the same time, making for a blindingly fast cat-and-mouse game played by parkour infantry. It completely changed my relationship to the maps and movement.

It also made me realize my reflexes and marksmanship suck. But practice makes perfect.