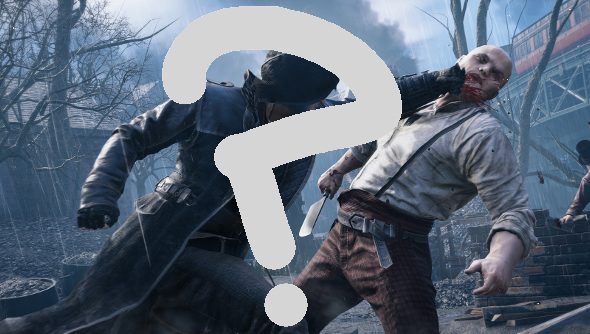 Ubisoft pulled back the curtain, today, unveiling a glimpse of this year’s Assassin’s Creed offering, Syndicate. We got a little slice of a grotty Victorian London and a bunch of murders, but there’s still plenty of room for speculation and hopeful wishing.

That leads us to our Topic of the Week. We’d like to know what you want from Assassin’s Creed: Syndicate. No awful eavesdropping quests? A story that isn’t crap? More elaborate assassination missions? Let us know in the comments.

Today’s wee bite of Syndicate has left me a little bit optimistic. Ubisoft Quebec has given combat and traversal a rethink, and while it’s just window dressing for the traditional Assassin’s Creed trope of taking over territory, I do like the concept of taking over gangs, which brings to mind Saints Row.

All the examples I wrote in the second paragraph are things I obviously want, but there are a few more.

We already knew that carriages were going to be a feature of Syndicate, but we properly got to see them in action today. The pre-alpha footage looked fine, but I’m hoping that it doesn’t feel like we’re basically driving very slow cars. I want them to almost topple over as they careen around corners, I want to see crowds of people panicking as they try to get out of the way of this runaway carriage, and I want fights atop them to be tense balancing acts.

Really, I want Ubisoft Quebec to make me as excited about riding around in a carriage as I was when sailing around in a boat in Black Flag and Rogue. It’s a tall order.

Can we maybe be reminded that it’s a sci-fi game, too? I adore all the historical detail that the series has been full off, but the sci-fi stuff could be just as great. I don’t really care all that much about Abstergo or what’s going on in the 21st Century, but I would like to see more of the sci-fi elements bleed into the core game.

Okay, that’s enough from me. What about you lovely lot? What do you want from Assassin’s Creed: Syndicate?