Retro-style isometric RPGs are experiencing a resurgence right now. You only have to look to the Pillars of Eternity and Divinity: Original Sin series, which are both enjoying a staggering amount of success today, for concrete proof of this. The previously more popular style of RPG, seen in triple-A titles like Mass Effect: Andromeda, on the other hand, aren’t doing so great. Why is this?

What are the best RPGs you can play on PC? We have all the answers.

The renewed interest in this older style of RPG is not the result of the rise in nostalgia that has birthed all those HD remasters we have had recently. This isn’t about looks. Instead, a big part of the appeal of these classic-style RPGs is in how they present information to you – as prose, rather than expensive visual effects and mo-capped animations. Not only does this fall more in line with the RPG genre’s roots in Dungeons and Dragons, it also allows many encounters to play out with the variety of a text adventure or visual novel, and with the same number of branching outcomes.

Nowhere is that more apparent than in Torment: Tides of Numenera, one of this year’s best RPGs and one that fully embraces its text-heavy roots and shows why the current crop of RPGs are thriving in this text-heavy future. 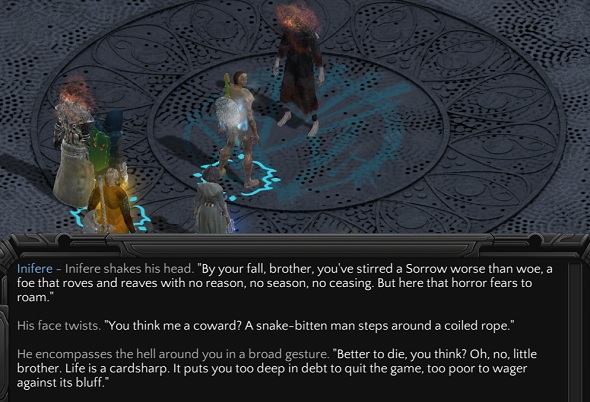 Numenera in particular is a spiritual successor to Planescape: Torment, one of the best RPGs of all time – thanks, in large part, to its excellent writing. But Numenera goes even further by moving the vast bulk of things you do into text boxes – the game features fewer combat encounters (I ran into under ten of them throughout the entire game) – which puts the focus much more on the story and characters.

Instead of battles, the encounters in Numenera revolve around a single person or object, which gives you a series of ways to react to them. What you end up doing is feeling the subject out, poking and prodding the different options until you can figure out a way to solve the problems of the people and places you find. Many of the options you are provided with will give you some background on the subject, while others offer some kind of resolution to the problem. But you are often going to have to dig to find it, which means trying different combinations of options until you unlock a satisfactory solution. For instance, you come across an unknown mechanism, and as you examine it, there are multiple ways to interact with it. You try different things until you start to get a sense of how it works – or you completely misread the situation and short out the thing, preventing you from using it further. Many different outcomes just like this come baked into every encounter. 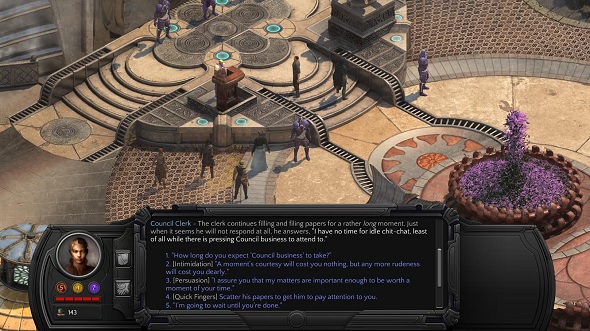 If this sounds familiar, that is because Numenera follows in the footsteps of text adventures. In fact, aside from the connective tissue that is the overhead view of the world around you, these encounters can be entirely experienced in text form. The written introduction of an encounter will painstakingly describe everything you can discern about the situation. Every object, action, and relevant sensation that results from your choices will be described, often without any graphical accompaniment. The advantages to this approach are fairly obvious on the development side of things: less need for graphical assets, fewer animations, and less voice acting. But for players, eschewing audiovisual elements in favour of description can allow the developers to be more ambitious in their encounter designs. Something that would be difficult to depict on screen – the impossible shapes which appear in Numenera, for example – is suddenly very possible with text.

Of course, text adventures give you a word parser to play around with, whereas here you are offered pre-determined options like a Choose Your Own Adventure book. The closest comparison, then, would be to modern-day Twine games. When you think about it, the way text-heavy RPGs are structured has a lot in common with these text-rich branching narrative browser games. 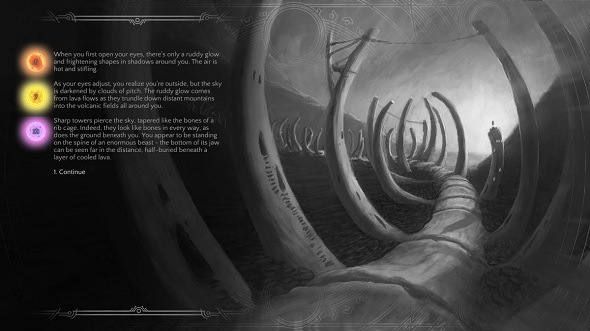 Torment: Tides of Numenera underscores this similarity through objects called merecasters, which let your character take temporary control of another character’s memory. These segments are entirely text-based, with only a black screen, glowing border, and a still image accompanying the text. While these encounters are not especially different from the others in the game, they take you out of Sagus Cliffs – the game’s setting – and thrust you into unfamiliar lands with very little context. The only thing you have to visualise the events described in these segments is what you read. The most striking thing about the merecaster segments is how much they look like a typical Twine game.

Both genres present players with a situation and asks them how they will react. Sure, on a broader scale that describes all games, but here it is in its purest form: action and reaction bouncing off of each other until a resolution is reached. Far from being a limited construct, text allows for greater flexibility and more possibilities, especially when you don’t need to worry about voicing every single line. 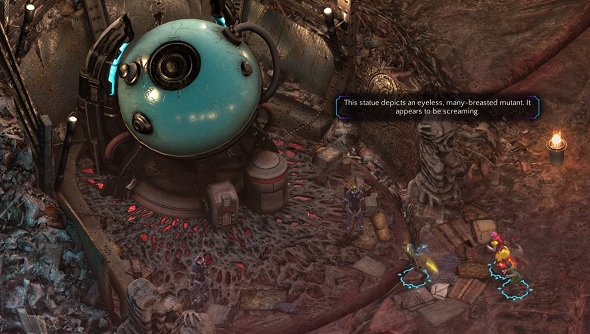 That’s the rub, isn’t it? Text sounds like an archaic, limited design construct, when it is really the opposite. Text is the ultimate player-driven design space because you take ownership of the worlds conjured up in your own imagination. Modern RPGs are embracing that power once again. Fancy graphics, complex AI, and remarkable facial capture are all very well, but the most powerful GPU currently available is still the one lodged in your skull.