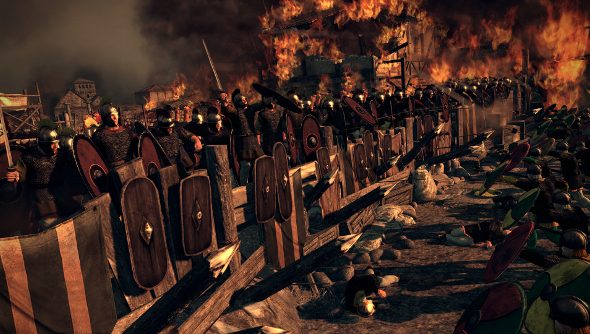 The barbarians are coming! And they’ve brought their families with them. Migrating hordes from the Huns to the Goths are central to Creative Assembly’s Total War: Attila, marching across Europe in huge droves, settling only long enough to replenish, before getting back to the business of razing villages.

With Attila’s release impending – it’s due out next month – Creative Assembly has put together a couple of new videos, introducing would-be conquerors to their potential barbarian buddies.

So it’s not just the Roman’s that need to fret about the hordes in the north – the Huns are as much a threat to the likes of the Goths as they are to the soft Romans in the Empire.

Creative Assembly is touting the migrating hordes as a new feature in Total War, but it first featured in the original Rome’s expansion, Barbarian Invasion. It’s changed a lot since then, however.

In Barbarian Invasion, tribes could up sticks and become a horde, a vast army, so it could find a new place to settle. In Attila, the horde mechanic has been fleshed out and turned into a system that has its tendrils in every aspect of the game.

A horde is essentially a mobile faction. It’s not just a huge army. It can generate wealth and make the most out of the land, and it can even create encampments, complete with unique buildings. These encampments aren’t like the fortified cities of the more static factions, but offer weary hordes a place to rest and lower attrition and, of course, prepare for war.

Barbarian factions can choose to settle down, unless they are the Huns, but they’ll need to conquer a city first, and then a few more. Since their entire infrastructure is based on the nomadic lifestyle, they need to expand quickly when they switch over to settled life, to make up for the massive changes.

Take a gander at Creative Assembly’s spotlight on the hordes.