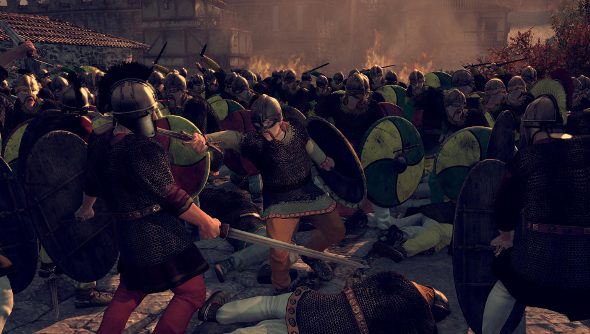 Creative Assembly’s shown off plenty of campaign action from Total War: Attila, but alongside the new campaign that depicts the fall of the Roman Empire are nine new historical battles, more than Rome II.

You can take a look at how Creative Assembly’s James Given and his Western Roman and Visigoth forces managed when facing Attila and his angry Huns, below.

Skip to 6:30 for the big Roman versus Hun scrap. Before that, however, designer Simon Mann shares his list of the biggest challenges in Attila, including sieges against stalwart cities like Rome and Constantinople, and playing hordes, who are always on the move, making enemies everywhere.

Given says that, unlike the historical battles in previous games, Attila’s will be more dynamic. Enemies won’t be as scripted, and where they go on the map and how they engage the player forces can change.

Total War: Attila will be out on February 17th.