Playing Total War: Rome Remastered is like seeing an old friend. Your life has progressed fine without them, and you don’t feel their absence. But whenever you do hang out you pick up right where you left off, like you’d never been apart, and are transported to simpler times and happy memories. In this case, a time of great tactical jank, cheesy defence strats, and a banging soundtrack to get you in the mood.

A time when Rome was four distinct entities, and when you had to physically send a person to talk to another empire. It took only a moment with Rome: Total War’s newly minted remaster before it all came flooding back. The Total War series has evolved a lot in the 17 years since Rome released, and decisively for the better.

Total War: Rome Remastered has none of these improvements and as such may shock modern sensibilities. But the first Rome is also one of the series’ most enduring entries, and the reasons for that haven’t changed. The original Rome was the first Total War to go fully 3D, and at the time it was one of the first accessible grand strategy games to be set during this perpetually popular period.

What other game of the early ’00s combined in-depth tactical battles, a grand strategy map, and a facsimile of Roman politics to boot? Rome would also set the stage for its equally popular successor, Medieval II, and indeed everything that came after that. 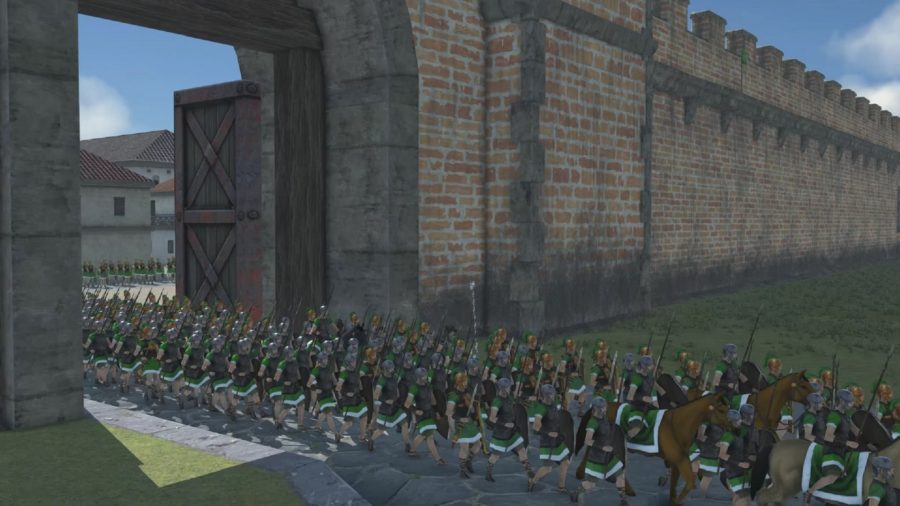 Half the battle in reviewing Total War: Rome Remastered has been against my own chequered memory. Feral Interactive has done a great job uplifting this game for modern machines, and has made plenty of its own additions and quality of life improvements.

Total War: Rome Remastered is comfortably familiar, and the music is still on point

Many have been documented already, but I gather there are plenty more that haven’t been communicated. Most sessions involve several rounds of ‘was it like that before?’ and ‘I don’t remember this being the case’. Apart from those momentary flashes of confusion, the remaster is comfortably familiar, and the music is still on point. Some of the genuinely ‘new’ stuff is quite interesting in concept as well.

The new merchant agent provides another minigame to engage with, which can net you much needed denarii for your military, though it feels too easy to either kill off enemy merchants to rack up experience for your assassin, or have your own merchant bought out by rivals, forcing you to start again. The quality of life changes around the UI, even in little things like making building progression more transparent, are also very welcome. Rome: Total War is definitely living its best life with this remaster. 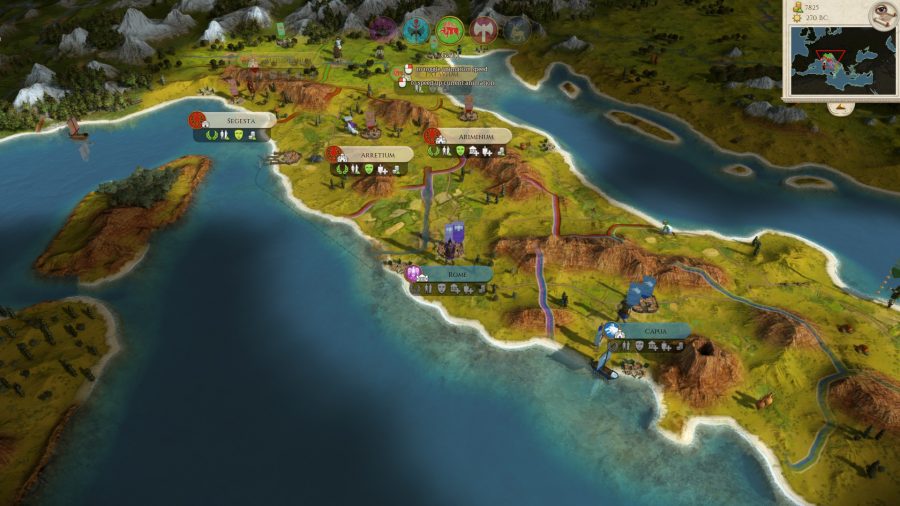 The uplifting has not gone entirely without incident. Graphical hiccups – ones that I’m pretty sure came up back in the day – persist. Load times are noticeable, which makes me wonder if there’s not some optimisation work left to do. The ways in which Feral has tried to open up the game could also do with some tweaking.

Rome: Total War is definitely living its best life with this remaster

For example, players are now able to play as literally any faction (except ‘rebels’) that existed in the original versions. For the main game, it means every faction on the map can be played, but in the Barbarian Invasion expansion, you can now play as some of the emergent factions, like the Romano-British or the Ostrogoths.

These factions only ever appeared in a game when certain conditions were met, but you weren’t able to play them without mods. In many cases their starting scenarios are quite brutal, and could perhaps do with some further balancing. My Arthurian-era British can’t ever seem to get off the ground. And then there’s the rest of the ‘legacy’ – diplomacy is still frustrating, the AI is still overly aggressive and gets old-fashioned buffs to combat you. A campaign game in Rome is more about running around putting out fires than it is making interesting strategic choices… again, all comfortably familiar, but a stark reminder of early Total War design. 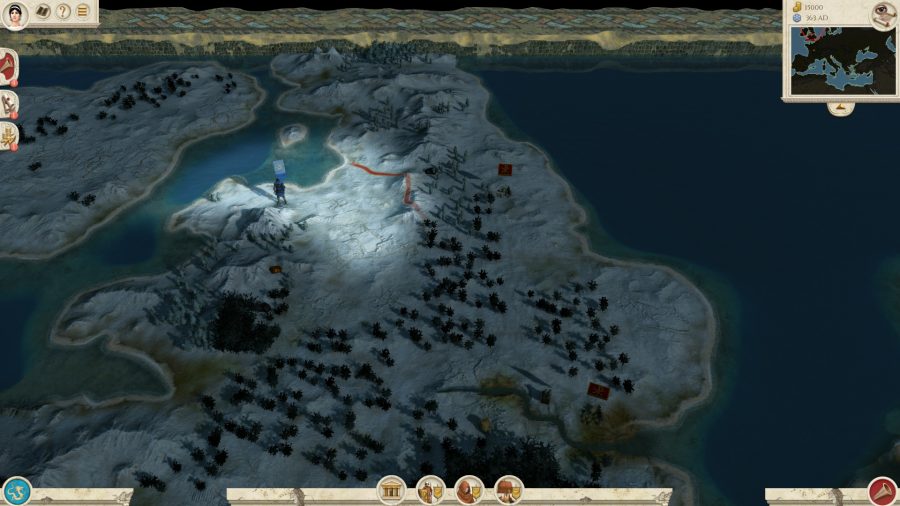 There’s one more important point to mention. That Rome: Total War still sees a couple thousand concurrent players on Steam is thanks – at least in part – to the mod community that sprang up around it. Compared to some of the mods that existed for the game in its heyday, Rome: Total War vanilla is a bit basic, and the same will be true for the remaster. In the face of modern Total War games Rome has not aged well.

None of that is to deny the craft and care Feral interactive has demonstrated in modernising this classic. The studio has lovingly and expertly brought an important Total War landmark into 2021. The game is visually vibrant, plays as well as it used to if not better in many areas, and there are only a few things that need rounding off to complete the experience. If you like the idea of being able to play this classic without suffering for the fact that it’s an old game, then this is a good purchase. On balance, it’s a better remaster than most. 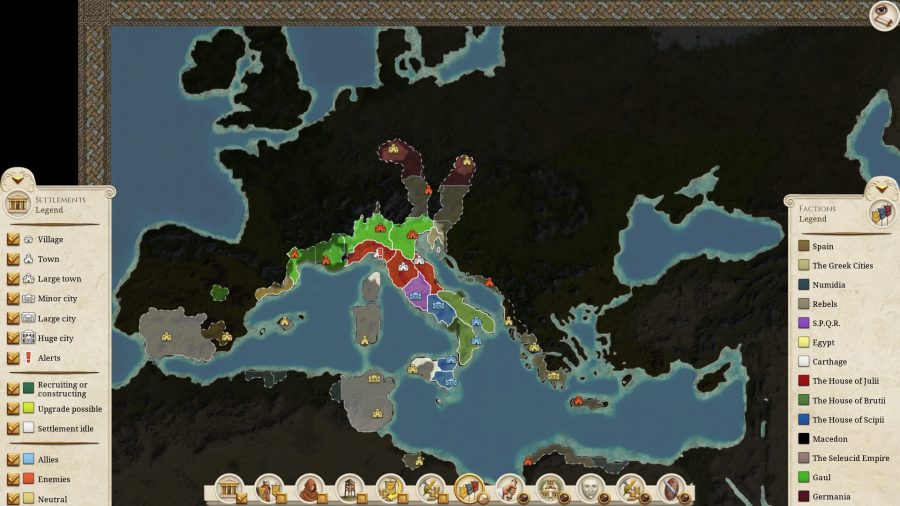 But it’s also hard to recommend Total War: Rome Remastered to anyone who hasn’t already played the original. If you want the same setting, but with modern Total War design and a just-as-healthy mod scene, you can play Total War: Rome 2 instead.

There are even Rome 2 mods that divide the Romans into three factions if you want it to feel authentic. This remaster is really only for those who still enjoy the original game, and even then, it’s only going to be worth the investment if the mod scene follows.

A lovingly crafted refresh of a classic Total War game that manages to recapture both its triumphs and its tragedies.