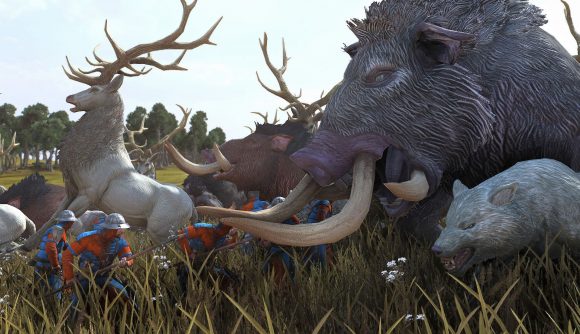 Total War: Warhammer 2‘s wood elves are already pretty strong in a fight, having a bunch of neat military recruitment options and units at their disposal (I’m looking at you, hawk riders). However, one modder reckons “the forces of nature could do with a bit more beast variety” and, having seen their answer – a mod adding a raft of new fantastical beats units and more – I’m inclined to agree.

Charmingly-named modder Calm&NormalTime has posted their very first Total Warhammer 2 mod on the turn-based strategy game’s Steam Workshop, which is simply called ‘Animals for wood elves’. This creation adds a whopping 12 new animal units to the race’s range of options, which draw on both majestic real-life creatures, such as boars, elk, wildcats, great stag, and boars, but also some fantastical beasties that should bring something new to their playstyle.

The modder lists pegasi, unicorns, white wolves, arboreal griffon, a lake dragon, and “questing beasts” in the lineup of new wood elves units, and from the screenshots of these (check some out below), they look like excellent additions to the forest-dwelling warriors.

Alongside these, the mod unlocks four existing game units – the great eagles, great hawks, forest dragons, and giant wolves – though the latter has been re-skinned and re-named to just “wolves”. Additionally, it “replaces the flying building with a five-tier animal building” and moves hawk riders to the cavalry building. 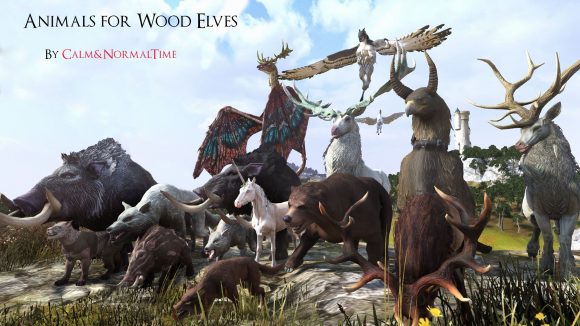 As for how these slot into gameplay, the modder explains that all units will count as wood elves legendary lord Drycha’s monsters (if you’re playing as Drycha), while all four-legged creatures will be counted as general cavalry, wildriders, and stag knights. The mod’s hawks, griffon, and lake dragons will work as hawk riders, eagles, and dragons, respectively, while all three will also count as general flying units. “The seven units unlocked at tier four and five also count as ‘elite forest spirits'”, the creator adds.

If you’re keen to see more or even grab the mod for yourself, head to the ‘Animals for wood elves’ mod page on the Steam workshop here. Also be sure to check out our rundown of some of the best strategy games  and best Total War: Warhammer 2 mods on PC while you’re here.