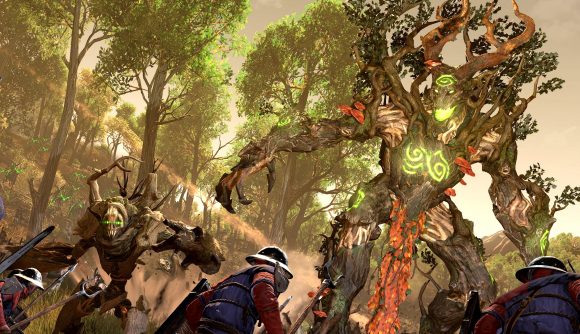 Not all heroes wear capes, and in the case of Total War: Warhammer II you can receive salvation from the unlikeliest of places. Picture this – you’re leading an army of Vampire Count forces through the countryside. You’re in force march mode, because you’re going to be late for tea if you don’t get there soon.

But crisis befalls you and you’re ambushed by an army of dwarfs, whose range capabilities are formidable and likely to tear your army of overdressed skeletons to pieces. What are you to do? How are you going to survive and not be late, for a very important date? This was exactly the dilemma facing Reddit user Azenathor. It turns out they just needed to trust in nature. Specifically, a Spruce tree. We think it’s a Spruce, anyway.

Expert analysis (read: we asked around the office) leads us to believe it’s some kind of fantasy Spruce, or maybe a Pine, although it’s burnt and lacking any foliage. It turns it’s not needed though because not only is this perennial plant an absolute unit, it’s capable of taking hits like Luke Skywalker in that scene from The Last Jedi.

Here’s the full clip from the Reddit thread on r/totalwar, so you can understand what we’re talking about:

Caught in Force March with a pretty strong enemy and I knew their ranged would decimate my forces. Found out how powerful trees are though. from totalwar

As you can see, Azenathor moved their hero unit to sit just behind the tree so that the approaching dwarven army would focus fire on it. The Spruce, being a total bad-ass, shrugs off these puny projectiles. If you’re wondering what’s actually happening, the current theory is that the tree simply has a hitbox that’s a bit wider than it should be. Combined with the fact that it’s not a destructible object, one has the perfect cover.

In the comments Azenathor confirms they sat there until the enemy units had expended all their ammunition. With the most dangerous threat neutralised, they could then proceed to destroy the dwarves in good order. Specifically, they kited the infantry back to their own army where they had a necromancer, who used ‘Wind of Death’ to decimate them.

Even modern Total War games like Warhammer II aren’t immune to janky defence strats, and we’ve been reminiscing about those in our Total War: Rome Remastered review. The original Rome: Total War was full of cheesy tactics you could use to defeat larger armies, especially in sieges.

Total War: Rome Remastered is out later today. We’re also very much looking forward to the Total War: Warhammer 3 release date, which so far has been set for later this year.