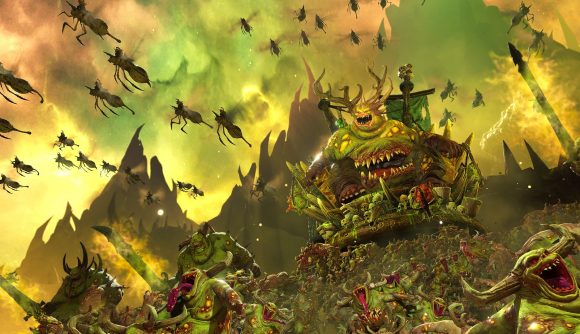 Chaos is coming to Total War: Warhammer III. We’ve suffered the rage of Khorne and the machinations of Tzeentch. Now we must prepare for an onslaught of Nurgle abominations and Slaanesh’s seduction as Creative Assembly lifts the veil on the final two Chaos Warhammer 3 races.

Today’s announcement focuses on Nurgle, the Plague Lord, and his champion Ku’gath Plaguefather, who will be the faction’s launch Legendary Lord. Nurgle factions in general thrive on spreading disease and debuffing their foes, while also giving their own forces a boost. Their buildings are cyclical, in the sense that they grow and then perish, while units can be recruited directly into armies for reduced strength.

Ku’gath, as the father of plagues, is unsurprisingly all about breeding new contagions and testing them on his foes, with an aim to create the ultimate disease that can infect even the gods. Much like the Ogre Kingdom’s Greasus Goldtooth, Ku’gath gets carried into battle on a palanquin, although he’s no slouch when it comes to melee combat or spellcasting. There’s been nothing revealed about Slaanesh just yet, although it seems the final chaotic pair are being set up as rivals fighting over new followers.

You can watch the reveal trailer below, which shows off Nurgle and Slaanesh armies fighting each other: 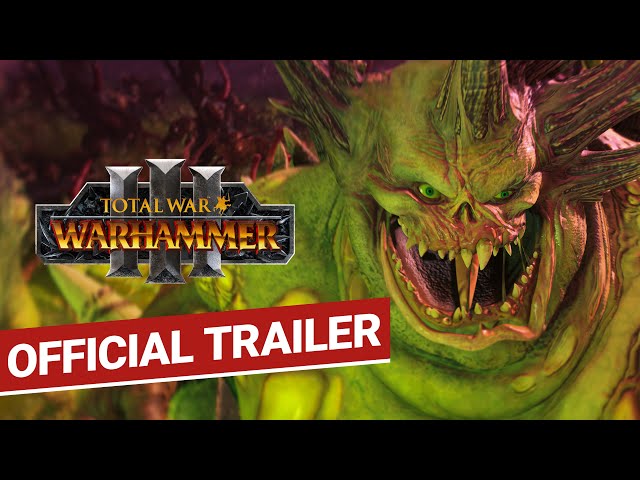 The full army roster for Nurgle is likely to be revealed at a later date, but Plaguebearers, Nurglings, Great Unclean Ones, Plague Toads, and Beasts of Nurgle have so far been confirmed, and you can see them and more tearing up the trailer.

On the Slaanesh side, there’s been no official confirmation on which units will be padding out their roster, but again you can see glimpses of plenty in the trailer. User Jejinak, who previously did army roster predictions for Cathay and Nurgle (and was pretty spot on), also whipped up a theoretical army list for Slaanesh. We also think – like Jejinak – the Slaanesh Legendary Lord will turn out to be N’Kari, who might even be the entity we see at the very end of the trailer.