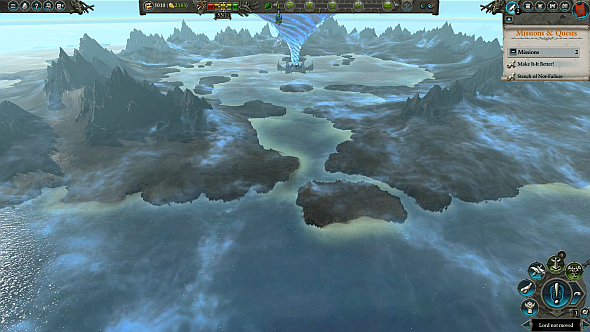 “My win! Nothing to do with you!” sneers my Legendary Lord Queek Headtaker, after I kill a High Elf army. I auto-resolved, so arguably he has a point, but it’s still kind of a dick thing to say. That’s the Skaven, though: they’re dicks. Cowardly, treacherous, and hateful of everyone else, I’ve never really liked them. But damn if they aren’t fun to play.

Want to know all about the ratmen? Check out our in-depth Total War: Warhammer 2 Skaven race guide.

A nearby Lizardmen faction are the first people stupid enough to trust me with a non-aggression pact. When they take the settlement I need to unify this region, they’re the first – but not the last – to feel the sting of my treachery. I declare a surprise war and take their city, squeaking gleefully as my reliability rating in the diplomacy screen tanks.

I never normally play like this, but it feels so much more appropriate when you are, quite literally, a rat. This is the effect that Warhammer has had on Total War: no longer is this solely a strategy game. Now it’s a role-playing game, too. 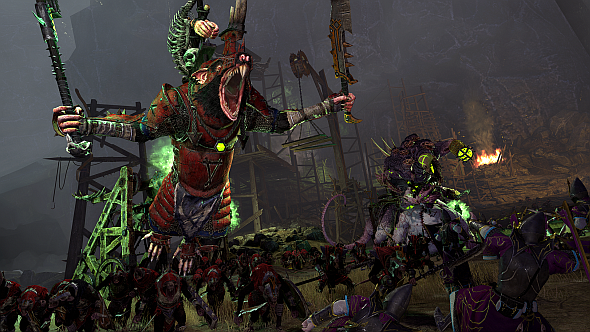 This has always been most apparent in the Legendary Lords and their quest chains. One of Queek’s kicks off around level five when he hears of a rival warlord chittering smack. It must be said that the quests themselves are still pretty prosaic: I’m simply instructed to defeat any enemy army to prove my ratulinity, and am left to imagine the context with only boxes of flavour text as inspiration. A little more than a taste would be nice, but I suppose this is Creative Assembly doing the best they can given the daunting scale of a grand strategy game. I’d much rather have this character-level storytelling present than absent – it just works better with the granularity of something like StarCraft II.

So instead, let’s focus on the epic: Queek’s personal vendettas aside, my overall objective is to gather warpstone on behalf of his master, Lord Gnawdwell, the ruthless boss of Clan Mors. He has a plan to disrupt the Great Vortex at the heart of Ulthuan and unlock its power, as explained in a new style of intro cutscene featuring lush artwork and animations. In harnessing the Vortex, their plan is to “seek-find the Screaming One,” a daemon who will require “a large tribute of warpstone” if summoned. Could this be a Vermin Lord? Maybe: despite how much CA have already shown of Total War: Warhammer II, there’s plenty of room for such surprises in the latter stages of the campaign.

Warpstone is the Skaven ritual currency. All four of the new factions have one – the Lizardmen’s are sacred plaques, for example – through which they will disrupt or stabilise the Vortex. I’m able to earn Warpstone in various ways – completing campaign objectives, raiding the new ruins and treasure sites, or through certain high-end buildings – but I don’t gather enough to attempt my first ritual before my hands-on time ends.

The elves do, however: I’m notified that Prince Tyrion’s faction, Lothern, have started a ritual. Checking them out, I note with interest that they’re at war with two of their High Elven neighbours – looks like their politicking is already costing them dearly.

Conducting a ritual will trigger an attack on “three of your most important cities” from fresh-spawned Chaos armies, game director Ian Roxburgh tells us, and your rivals get a ten-turn window to add to the mayhem by making an intervention. This involves sending their choice of armies through a portal to attack the enemy – unsurprisingly, such a move is considered an act of war. You can choose to make a small, medium, or large intervention, with each costing a fixed amount of gold (5,000, 10,000, or 20,000, respectively). This will then spawn AI-controlled, allied armies of corresponding size near the enemy’s ritual site – my own half-stack small intervention is easily brushed aside by Tyrion. You can expect enemies to intervene against your own attempts to tamper with the Vortex – it’s only fair, after all. 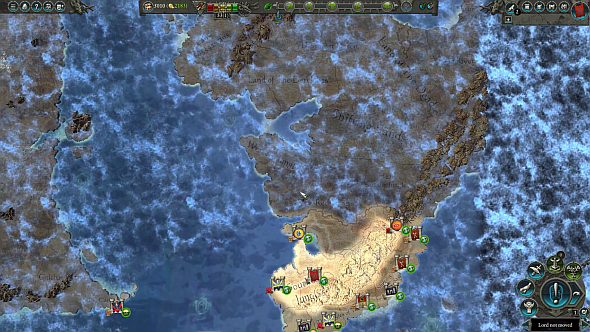 Closer to home, I’m keen to explore the continent to the north of me. I beeline to the tier three Den of Secrets, which will allow me to recruit my first hero: an Assassin. I send him scurrying north, discovering the Black Pyramid of Nagash and the Black Tower of Arkhan – lore-heavy settlements under the control of the Strygos Empire, a new Vampire faction led by Ushoran. Further northwest are Arabyan cities controlled by minor Empire and Bretonnian factions.

Creative Assembly have since published all of this, so click here to read all about the world map, its many occupants, and the potential for both to be fleshed out with further content. In summary: we’re betting on Tomb Kings DLC soon, Araby DLC later, and maybe some new Legendary Lords for the Vampires.

There’s plenty else to discover in what is the most lively and detailed campaign map in a Total War game since the original Total War: Warhammer. Storms crackle over twinkling sapphire seas, Lizardmen stonework pokes out from cliffsides, and Total War has Civilization-esque goody huts now.

We’ll let ‘ruins’ be their umbrella term, but they also take the form of shipwrecks, skull-shaped reefs, mysterious islands, and so on. Send an army to plunder them, and you’ll get some flavour text plus a reward – a payout of 1,500 gold in one case, and a choice of better leadership in battle, or better movement range over the map in another. You can also send a Hero to scout them, and sometimes you’ll want to: Skaven cities will appear as ruins to everyone else. Bear this in mind if you play against them, lest your army stumble into a fight with a huge Skaven garrison. 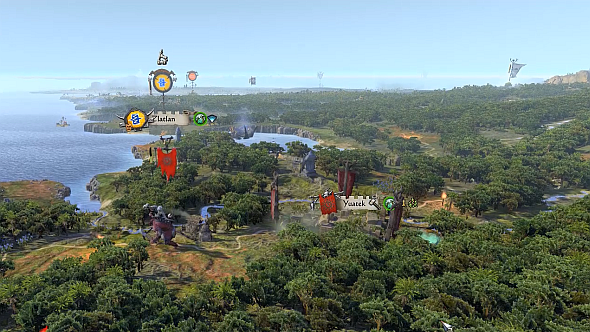 It’s still Creative Assembly’s plan to release a free update soon after Total War: Warhammer II launches, which will add a new ‘grand campaign’ for owners of the original game that ties together both maps in a big, violent sandbox. Accordingly, many of the sequel’s refinements will make their way into the joint campaign (though the original Old World campaign will remain as-is).

One example is the new climates mechanic. In the original game, the four launch factions were divided into pairs, with each pair unable to occupy settlements belonging to the other. That’s getting replaced by a new ‘climates’ system, where you can technically colonise any settlement, but there are penalties for picking one in a climate that doesn’t suit your race.

“There are ten different climates,” campaign designer Eva Jobse says. “Each race generally likes three, then there are four more that you dislike, and three more that you outright hate. The less suitable the climate, the more heavily you are penalised – you build slower, building costs are higher, and income will be lower. There might be tactical reasons why you’d want to expand to a particular area of the map – just to build a military outpost with the recruitment buildings, say – but it wouldn’t be a settlement that generates [much] income.”

Climates include: tropics, which suit the Skaven, according to the campaign map’s UI; frozen tundra, which I’m betting is Chaos’s choice; Dwarf-favoured mountains; and magical islands, which I reckon the High Elves will enjoy. They’re all present in the Vortex campaign, and will be retrofitted into the grand campaign, Jobse says. According to Roxburgh, the grand campaign is “on course, all looking good,” and being tested internally. 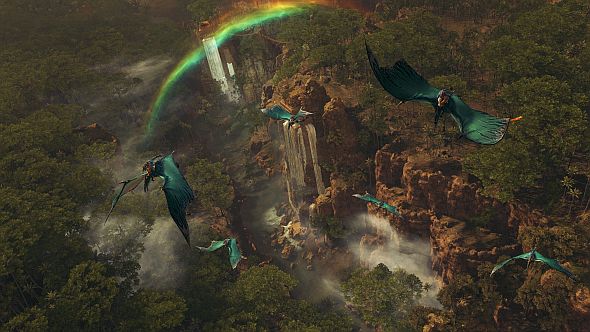 It’s all looking quite promising. I mightn’t have minded more of the same, given what a good job CA have done so far in transplanting tabletop Warhammer to Total War (it’d be nice to see fewer holes in the unit rosters, but I guess only tabletop fans know they exist). Yet the devs clearly aren’t content with so modest an aim: on top of the new races, there are loads of thoughtful refinements to the campaign, as well as an attempt to tell a real story. We’ll need dozens more hours to judge the success of all this, but it’s nice to see that no-one’s resting on any laurels.