This April, Total War will leave history behind to delve into the bloody universe of Games Workshop’s Warhammer. The awkwardly titled Total War: Warhammer will see Greek Hoplites and Polish Hussars replaced by axe-wielding Dwarves and ferocious Orcs.

It seems like quite the departure from the historical grounding of the rest of the series. There will be magic! And giant winged beasts raining death from above! And Goblins riding giant gruesome spiders! What a time to be alive.

Total War: Attila earned a spot in our list of the best PC games.

On the surface, then, Total War: Warhammer seems very new, refreshing even. But while the game does promise to be a significant shake up of a formula that has started to get a little old, a fantasy Total War game doesn’t seem unusual at all. Creative Assembly have been making them for years. 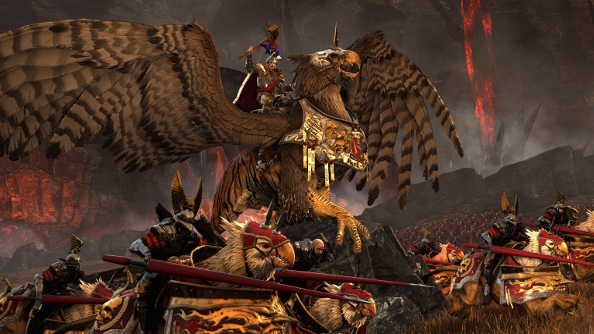 Way back through the mists of time, I spoke with Creative Assembly about placing authenticity over accuracy in Total War: Rome II. The folk behind Total War have always drawn a line between accuracy and authenticity, explaining that Total War falls into the latter side. The studio takes liberties all the time to ensure that the games are fun and not limited by a dogmatic obsession with what exactly happened during whatever period the game is focussed on.

“In terms of playing the game, it’s kind of a sandbox experience,” Creative Assembly’s Al Bickham explained. “So it very quickly becomes counterfactual and there are times when accuracy is going to fight the gameplay, and gameplay wins, because it’s a game.”

The result is often something that borders on historical fantasy; not merely an alternate history where Rome never fell or another European power dominated the Americas, but a fantasy where empires that never existed take over the world. The games never deviate to the point where they become unrecognisable, historically, but they consistently push the boundaries of realism.

Samurai duels in the middle of a giant battle, stirring speeches from generals, bands of warriors that become mythically strong: Total War has long held a romantic view of warfare, but it wasn’t until last year’s Attila that I truly felt like I was involved in a fantastical world war that held as many similarities with the likes of A Song of Ice and Fire as it did with actual history. 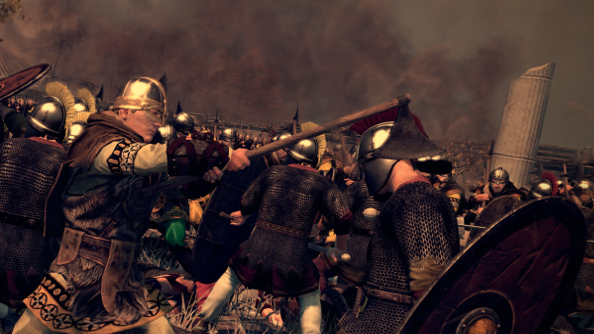 The setting is everything. In Attila, it feels like the world is at an end, as plummeting temperatures push nomadic groups into conflict with established powers, and all the while there’s the threat of Attila himself, a prophesied leader whose troops are swallowing up whole nations. It’s an apocalyptic setting that becomes grimmer as the game continues. Eventually, whole chunks of the map get consumed by fire as a tide of barbarians shatters civilisation.

Attila’s also blessed with a clearer narrative. Yes, it’s still a sandbox, but there’s a story playing out behind it all, where ancient, decadent, stretched empires suddenly find themselves struggling to survive as the world collapses before their very eyes and new powers rise up to fight for a place in the new order. The game’s even effectively split up into chapters, each progressing the story of Attila and the world he’s determined to soak in blood. It’s a Total War game with a genuine, bonafide antagonist; a villain you can try to defeat or play as.

Ultra-powerful, bloodthirsty warlords; bickering, jealous, intrigue-obsessed families; continents ravaged by fire and steel; and an era, seemingly a world, coming to an end as it both freezes and burns – it sounds utterly fantastical. It’s rooted in historical events, certainly, but Creative Assembly have framed it in a way that’s dramatic and fanciful.

The battles themselves are full of cinematic flair that gives them a fantastical bent as well. Just slap your eyes on this screenshot, below. 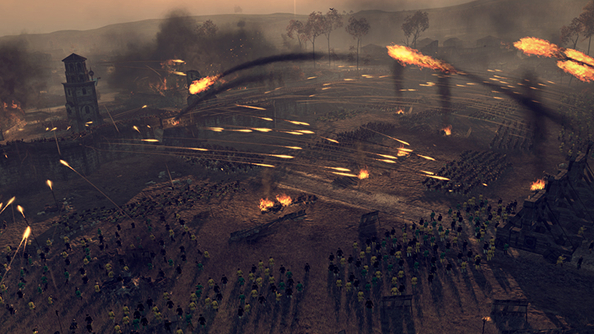 The lighting, the flames streaking across the sky, the burning arrows homing in on fleshy warriors – it looks more like something out of Lord of the Rings than a clash from antiquity. With the increased levels of destruction in Attila, seeing cities crumble left, right and centre, and an obsession with fire, Creative Assembly really push the idea that this is the end of days.

I mentioned A Song of Ice and Fire earlier, but Bernard Cornwell’s Warlord Chronicles is perhaps a more apt comparison. If you’re not familiar with the author, you might still recognise the name Sharpe, a series that ended up getting TV adaptations with Sean Bean in the lead role. Cornwell’s all about historical fiction, but the Warlord Chronicles deviates from this by delving into the legend of King Arthur.

Like Total War, authenticity trumps accuracy – we are dealing with mythology here – and while Cornwell’s goal was to give Arthur historical context, he also writes a world that’s full of magic, though that magic is as much a product of illusion and psychology as it is the unexplainable. Both the Total War and Warlord series beg the question: when does historical fiction become fantasy?

Myth, magic and prophecy are all part of history. People believed in supernatural heroes, spells, gods that could walk among mortals, and great rulers that were heralded by mystical events – it’s as fantastical as anything written by George R R Martin or Patrick Rothfuss, but rooted in real beliefs.

The Total War series has also become a platform for more overt fantasy. Next to Attila and Shogun II, the Total War game that’s gripped me the most is probably Third Age, a huge mod that overhauls Medieval II, transforming it into Tolkien’s Middle-earth. There are even multiple mods for various games in the series that swap out the real-world setting for the Warhammer universe, like Rage of Dark Gods and Warhammer: Total War.

Given all of this, Total War: Warhammer feels like a natural progression rather than a leap into the unknown. And Creative Assembly will have to do what they’ve done time and time again: put their own mark on an existing universe. Warhammer might be pure fantasy, but it’s one with a long and detailed history that Creative Assembly could be even more beholden to than they are the history of the real-world.