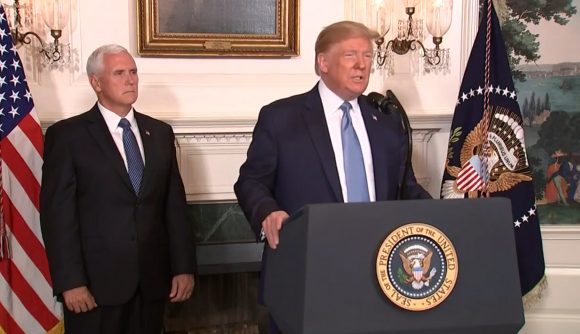 This weekend, two unrelated mass shootings in the United States – one in El Paso, Texas and one in Dayton, Ohio – saw 29 people killed and many more injured. The murders sparked another round of debate about gun violence in the US, and in a national address this morning, President Donald Trump pointed the blame in part at “gruesome and grisly videogames.”

“We must stop the glorification of violence in our society,” Trump says in the address (via Polygon). “This includes the gruesome and grisly video games that are now commonplace. It is too easy today for troubled youth to surround themselves with a culture that celebrates violence. We must stop or substantially reduce this.”

The comments sparked a reaction in the stock market, as MarketWatch reports. Activision Blizzard shares went down 6.1% in Monday morning trading, and Take-Two Interactive stock has dropped 6.3%. (Take-Two will announce its quarterly earnings later today.) EA is down 4.6%, and Zynga is down 3.9%. The market as a whole is down, but not quite as badly as the game-specific stocks – the S&P 500 index, for example, is down by 2.1%.

Early in 2018, Trump met with game industry representatives and media watchdogs on the topic of violent games. That meeting included an 88-second supercut of violent gaming moments, including Modern Warfare 2’s ‘No Russian’ level. Before that, Pennsylvania legislators proposed a 10% ‘sin tax’ on violent games.

In today’s address, Trump also says “we must recognize that the internet has provided a dangerous avenue to radicalize disturbed minds.” The El Paso shooter was linked with white nationalist writings on 8chan, which has led DDoS-protection service Cloudflare to terminate its service with the site.

“In one voice our nation must condemn racism, bigotry, and white supremacy,” Trump says in his address.