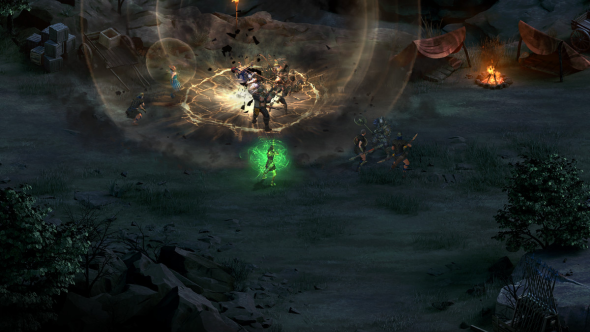 Update June 13, 2017: A second update will accompany the expansion.

Tyranny’s first expansion, The Bastard’s Wound, will release alongside its own free update, in now-classic Paradox style. There’ll be new voice acting, a new path to an unseen ending, and an enlargement of a third act that was over too soon. Substantial!

Original story June 13, 2017: Obsidian’s cruel and clever fantasy RPG, Tyranny, is getting a surprise update today. It introduces the option of New Game Plus, while paid DLC named Tales from the Tiers makes the existing game’s overworld busier. More than that, a full-fledged expansion is coming to the PC later this year, unlocking a whole new region of the Tiers to subjugate.

Tales from the Tiers is what Obsidian call an ‘event pack’, and brings new encounters and stories to the game. They’ll pop up when you’re travelling about between the towns and spires of the Tiers, and might be meetings with merchants or scuffles with ambushers.

Beyond that, the studio have revised skill training, rebalanced combat, and included the ability to respec your character and companions in today’s update. If you think all of that’s worth starting again for, you can do so with all your stats, spells, and belongings intact in New Game Plus.

Then there’s the meatier expansion, due before the end of 2017 on Windows, Mac, and Linux.

“The Bastard’s Wound region is all new to Tyranny, with a host of new quests, and new people to kill, betray, or befriend,” Obsidian told Polygon. “With this new expansion, we delve deeper into the mysteries of Terratus as players bring Kyros’ justice (or their own version of it) to a new corner of the Tiers.

“In addition to the new region, Bastard’s Wound gives players a chance to learn more about their companions in a trio of quests tied to key members of their traveling group.”

Those key members are, coincidentally, my favoured party composition: Verse, Barik, and Lantry. The Bastard’s Wound will take the Fatebinder to a refugee settlement, where the enemies and victims of Kyros have understandably fled in secret. You’ll determine their fate, obvs.

I’m delighted that we’re getting more Tyranny – especially after both Obsidian and publisher Paradox seemed disappointed with sales. It’s a fantastic and shrewd RPG I’m convinced will be remembered as one of the decade’s best.