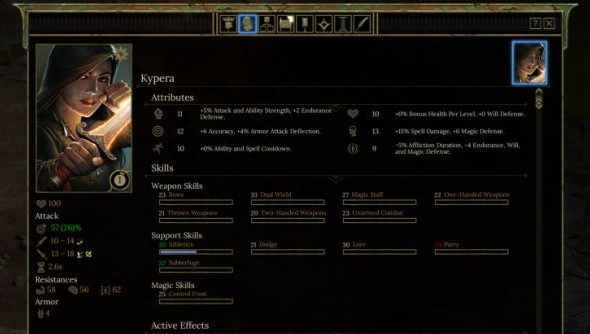 The next Obsidian RPG project, Tyranny, is awfully exciting. I’ve seen it and liked it, Fraser’s talked to them about it and liked it even more. To keep us (and a ravenous community) in check, Obisidian have kicked off a developer diary series to keep us posted on how it will play and why. The latest is on the skill system, which is using Elder Scrolls one-two combo of skills governing level and going up as they’re used. Hit a man with an axe, get one-handed skill, grow to level 2, equip shiny new axe. The circle of life.

While you wait, here’s the best RPG there’s ever been.

Game Director Brian Heins breaks all this down in the post, as well as showing off their attribute system and how it affects skills. They break down like this:

So far, so fairly standard, though at least they’re staying away from Strength, Dexterity and Intelligence. While these attributes can be improved through gear and play, as well as serving as a baseline, how they increase skills is the important bit. Over to Heins:

I’m a fan of systems simple enough to explain like this, though I do wonder how much of it will show up in-game. Diablo 3 eventually boiled it down to just telling you exactly how much extra damage you could expect from most stats, rather than having you work it out yourself. That’s a game entirely about upgrading gear into more gear though, and had numerous unique effects on powerful legendary items that the internal maths didn’t take into account.

As well as detailing how skills will be granted even if combat is skipped with social manipulation, as we’ve heard before, there’s also this brief glimpse of the talent system that will support character advancement: 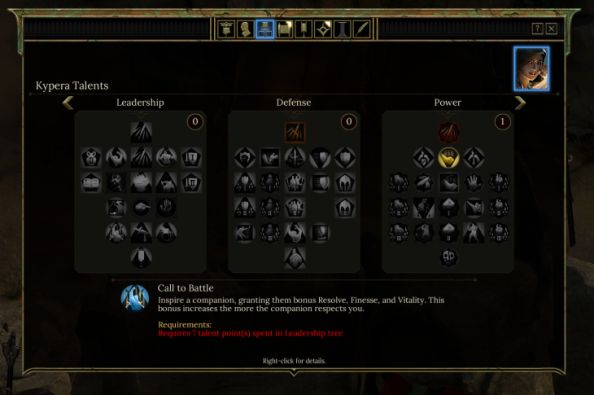 Have a read of the full thing if you’re interested in what’s going into Tyranny.