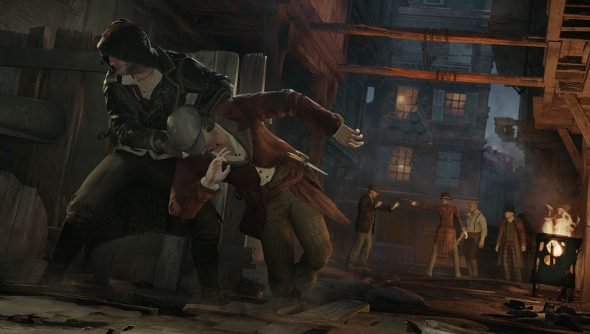 If the last few Assassin’s Creed games gave you a taste for murderous multiplayer, then you might not be too chuffed to hear that Assassin’s Creed: Syndicate will be a solo affair. Ubisoft Quebec want to focus on the changes to stealth and combat, as well as the narrative, instead adding co-op or other multiplayer modes.

“The reason we are doing this is to really focus on the roots of the franchise,” creative director Marc-Alexis Cote told Gamespot. “That’s why all nine studios are focused on delivering this single-player experience.”

Nine studios. I always forget how many studios appear to be required to make an Assassin’s Creed game.

Ubisoft Montreal said the same thing about Unity, that it would be a return to Assassin’s Creed’s roots. Maybe the roots are a bit rubbish?

Beyond this refocusing, multiplayer wouldn’t be a good match with the changes in combat and the addition of vehicles, executive producer Francois Pelland explained.

“We felt like, especially with the type of fight that we have, a very hand-to-hand, very close combat fight, that we needed to have very high responsiveness on the system. That’s one thing. It’s navigation as well. When we decided two years and a half ago, we said, let’s do London of 1868. You cannot have vehicles that are just cosmetic. You cannot have vehicles that are just there to look good. Players would have said, I want to drive those things. That adds complexity to the thing. It’s more technical reasons [for leaving out multiplayer.]”

Assassin’s Creed: Syndicate only has a release date on consoles, and a vague window of autumn on PC.