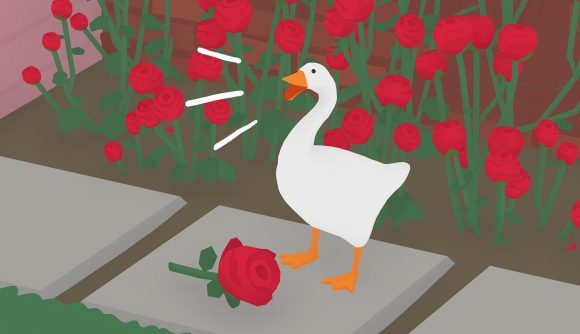 The 2020 DICE Awards are out, and one very naughty little fowl has won the biggest accolade of all. That’s right, House House’s 2019 puzzle-stealth delight Untitled Goose Game has scooped up game of the year at this year’s awards.

This is surely an exciting win for the indie Australian dev given the four other big names Untitled Goose Game was fending off in the category: Hideo Kojima’s Death Stranding, ZA/UM’s RPG Disco Elysium (which we gave a nine out of ten in our Disco Elysium review), The Outer Wilds, and Control (which we deemed last year’s best technical achievement in the PCGamesN Awards 2019).

That’s not all the only award Goose Game picked up at the DICE (Design Innovate Communicate Entertain) Awards, either. It also won the outstanding achievement for an independent game and outstanding achievement in character categories, too. That means a sociopathic little gander beat Death Stranding’s intrepid protagonist Sam Porter Bridges and Control’s para-naturally powered hero Jesse Faden in character development. HONK!

If you’re keen to see what’s in store for the year ahead, check out the upcoming PC games of 2020, as well as the best stealth games around if you’d like to put your sneaky key-stealing skills to the test.