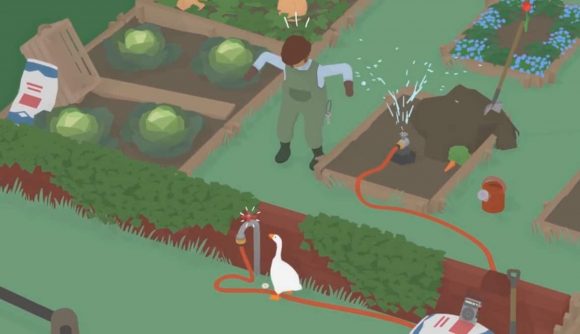 The goose will finally be on the loose in only a few short weeks. After an indefinite delay earlier this year, Untitled Goose Game will come out September 20 on the Epic Games Store.

Since being revealed in 2017, Untitled Goose Game has been one of the most anticipated games of each year since. The premise is simple: you’re a goose, and you must cause havoc. From the get go, players have been clamouring for the cutesy adventure, biding their time until we get to ruin someone’s day for ourselves and then scurry away wings aflutter just to do it all again.

Finally, the time is nearly upon us. Untitled Goose Game was revealed as an Epic Games Store exclusive earlier this year, with developer House House explaining that the decision was an entirely financial one, stating that Epic’s offer means stability for the small team. Fanfare on its own doesn’t pay the bills, and as developers their foremost concern is keeping the lights on, regardless of what tribal parts of the internet might think or say.

Fears were raised when release was delayed in February this year that the studio might be in a spot of bother. Regardless of what anyone thinks of Epic, it’s great that such an option exists for charming projects like Untitled Goose Game, whose teams may otherwise struggle to get across the finish line.

The game will launch at a price of $14.99 for an unspecified amount of time before going up to the regular price of $20, and will feature 11 languages. Presumably this is so people the world over can understand the insults thrown at them as they make an unholy mess.

We can cause all the honking ruckus we like when Untitled Goose Game comes out September 20.