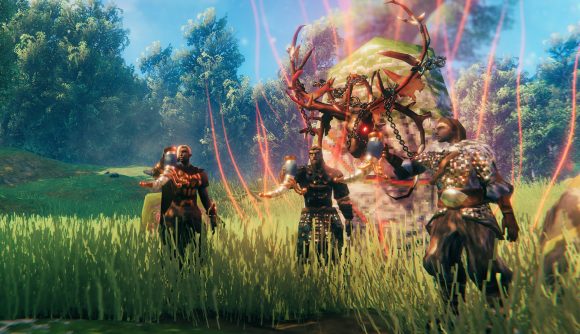 The Valheim Mistlands release date has remained a mystery since the game’s launch in Early Access over a year ago, but it seems the launch of the survival game’s first new biome is finally in sight. As part of a press release announcing that Valheim has sold 10 million copies so far, the devs have confirmed that the Mistlands update is scheduled to launch in 2022.

“As the development of the next major content update continues,” the official statement reads, “fans of the survival genre can look forward to more Valheim goodness coming this year, including a brand-new biome to explore, enemies to fight and new weapons to craft.”

The Valheim roadmap has been substantially shuffled since it was first revealed, though the devs at Iron Gate have made clear they’re ramping up work on the Mistlands with the reveals of new creatures and weapons. A patch in 2021 stripped the placeholder Mistlands locations, which you can already visit in-game, of all their trees and other objects.

Valheim’s biggest update so far has been Hearth and Home, but earlier this year, we got an update to the existing Mountain biome. Despite Valheim’s commercial and critical success (we declared it one of the best games of 2021), the one consistent complaint the community has had is the length of time between major content updates.

“Our team has doubled since launch and knowing Valheim is enjoyed by millions of players around the world honours and humbles us at the same time,” Iron Gate CEO Richard Svensson says in the press release. “Our ambitions for the game have never been stronger and the development of Mistlands is well underway – we can’t wait to bring this new mysterious biome to the game.”