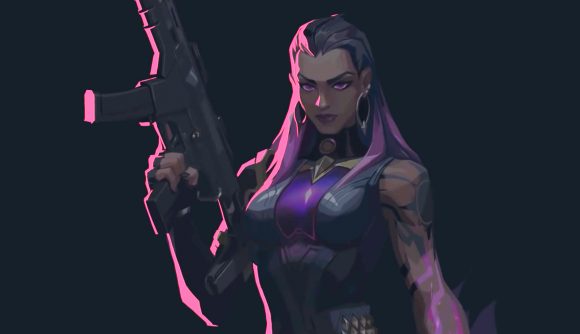 The Valorant beta is over, and while fans will have to wait until the Valorant release date on June 2 to keep playing, Riot’s providing some extra teasers on the next agent in the meantime. A new character has started to make brief appearances in official trailers and art, and regional social media accounts for the game are sharing the message “Reyna is here”.

The first appearance of Valorant’s new agent came in a bit of official art Riot sent out alongside details about the beta’s player count, as noted by our sister site, The Loadout. Shortly after, a new trailer from Valorant’s Brazilian social media channels offered another look at the heretofore unseen character. Then, Valorant’s Latin American channels began retweeting an odd video with the hashtag #ReynaIsHere.

My college Spanish has long since left me, but Reyna – or Reina, as more modern Spanish spellings would render it – translates to Queen. It could either be a name or a nickname for the agent, but her heavy promotion on Valorant’s Brazilian and Latin American socials certainly offer some hints about her culture.

As for how the character will actually play, there’s been no official clues so far. Leaked voice lines about a character named ‘Sabine’ have suggested somebody with vampiric powers is coming, though.

Riot initially had plans to launch with 12 characters, though more recently said that the number has shifted down to 11. (In an interview with Geoff Keighley, at the 4:10 mark.) That eleventh character is set to launch day one, so expect to see Reyna, or Sabine, or whatever this character ends up being named when Valorant goes back online on June 2.

In the meantime, you can check out the full roster of Valorant characters so you can see who’s currently in the game.