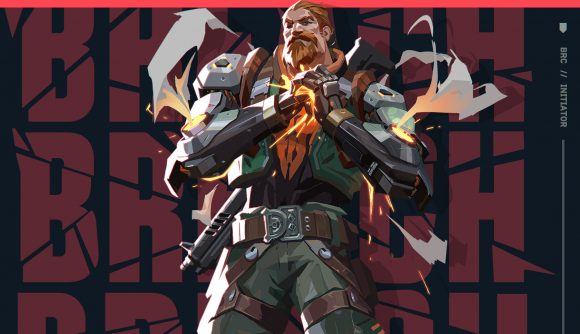 Riot’s Valorant has had an impressive start among the world’s FPS games, but unlike with the relatively reliable dataminer previews of Rainbow Six Siege or Apex Legends, it appears that Valorant’s got a whole lot of references to cancelled or reworked characters hiding in the code. After the characters Shatter and Crusader resurfaced in a new batch of leaks, Riot has had to remind players that these are, in fact, shelved prototypes.

These are “super old cancelled characters”, Riot’s Ryan ‘Morello’ Scott says on Twitter (via Dot Esports). “I’ve talked a bunch on my stream about Crusader getting the axe. Y’all reading too much into files – lots of stuff cut from the game over time”. The dataminer framed thee characters as ideas with a high probability of having already been scrapped, but the info quickly spread through the community without the caveats.

Crusader, as it exists in the files, would’ve had a shield item that could block damage and be thrown. Crusader eventually transformed into Breach, as Scott noted during a Twitch stream some time ago.

Shatter, on the other hand, would’ve had a clone ability that acts as a decoy. As with Crusader, Scott confirmed in a Twitch stream that Shatter was a different early prototype.

Super old cancelled characters. I've talked a bunch on my stream about Crusader getting the axe. Y'all reading too much into files – lots of stuff cut from the game over time https://t.co/goz3I3hiwJ

New Valorant agents will come six times a year, so our Valorant tier list is likely in for constant shake-ups – but while Riot could return to the ideas behind Crusader and Shatter anytime, don’t expect those characters to hit the game as they’re described in these datamines.