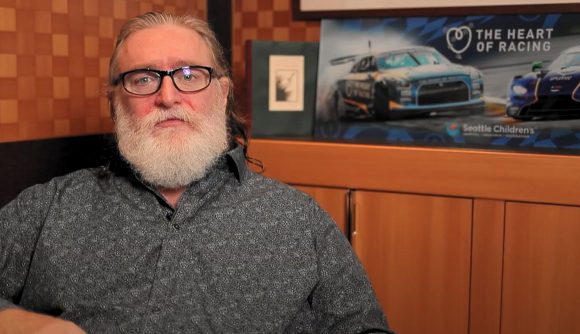 Valve head Gabe Newell has created a New Zealand-based car racing team to help raise funds for NZ children’s charity, the Starship Foundation. The dev has brought a new, D1NZ champion driver from the country on board to race for a new extension of his The Heart of Racing team – and it’s already scored its first race win.

As reported by TVNZ’s One News, the new chapter for The Heart of Racing adds New Zealand driver and D1NZ champion Darren Kelly to the team. THoR is an existing car racing program that helps raise money for Seattle Children’s Hospital in the US, and is “fully-funded” by Valve’s Newell and Yahn Bernier. Alongside Kelly, Spanish driver Alex Riberas – who has raced for the THoR team for a few years – also joins the NZ edition.

The NZ-based team’s debut took place over the past weekend, at the country’s Teretonga Park circuit, near Invercargill. It won the South Island Endurance Series’ first round, with a margin of about half a second over a three-hour-long race, the site reports. THoR uses an Aston Martin Vantage GT3 imported from the UK, and is due to take part in the upcoming North Island Endurance Series, starting Friday 18, too.

According to Starship spokesperson Melanie Esplin on The Heart of Racing’s site, the team’s already raised NZ$250,000 for the Starship Foundation “going into the season”, with money going towards the “National Children’s Intensive Care Unit to support the continued delivery of world-class care for critically sick and injured children from across the country”.

“The Heart of Racing program really resonates with me and I feel lucky to begin my career in endurance racing with this team,” Kelly tells TVNZ One News. “As a Kiwi who spent a lot of time at Starship as a child, I am so excited to race for these kids.”

Earlier this year, Gabe Newell announced he and some friends would be throw a free ‘thank you’ concert for New Zealand, having been based in the country since March following the outbreak of COVID-19 around the world. However, the event had to be postponed, following news that Auckland would be moving to ‘alert level three’ in August.

If you want to find out more about The Heart of Racing Team NZ, its racing schedule, and the Starship Foundation, you know where to click.