Update, May 15: Valve have a new website, and they’re hiring people to make games that are definitely not Artifact.

After briefly going live last week, Valve’s newly redesigned website is up for real, and it looks like the online presence of a company who intend to make videogames. Not only are the notes we saw last week like “we make games” and the promise of “top secret” new games still there, we’ve now seen a number of game design job listings posted.

Just give us something to add to our list of upcoming PC games, please.

Valve want a level designer capable of “building the game world in 3D” and “using entity scripting to create cinematic sequences of gameplay,” which should alone tell you that they’ve got more up their sleeve than what’s currently been announced. The notion of “cinematic sequences of gameplay” is especially interesting, since it’s something Valve haven’t spent much time with since Portal 2 in 2011.

The company are also hiring writers, including those with experience in “cinematic and narrative video game writing,” as well as those from film, TV, and copy-writing backgrounds. The writer listing is incredibly broad, though combined with the details from the level designer listing it seems that they’re at least experimenting with making narrative games again.

Their search for writers is especially notable since many of their best known wordsmiths, likeChet Faliszek, Jay Pinkerton, and Marc Laidlaw, have all left the company within the past few years. The latter even recently released a document that appears to be the plot of Half-Life 2: Episode 3.

Valve currently have two games officially in production, with Artifact having recently been joined by In the Valley of the Gods with the company’s acquisition of developers Campo Santo. Valve keep saying that they’re making games, and now they’re even publicly hiring people to help in that process.

Update, May 11: At theArtifactreveal event two months ago, even longtime Valve fans disappointed by the company’s decision to invest development in a card game took notice of the statement “we’re going to start shipping games again.” No,Half-Life 3is not confirmed, but Valve have relaunched their website with the promise that new stuff is in development.

Their new About page runs down the company’s development history – including an unexpectedly savage dig at Ricochet – and follows up with the reminder that “We have some new games in the works, too. A couple have been announced, while others remain top secret.”

At least, it did say that while theredesigned websitewas still live, but every link now redirects to Steam. Maybe the rebrand went live prematurely, but this means Valve are also currently without even the old website they’ve hosted for the better part of a decade.

Valve’s announced upcoming games are Artifact and In the Valley of the Gods from thenewly-acquired Campo Santo. We know that Valve were working on a handful ofVR gamesas of a year ago, and asRolling Stonereport those titles were still in active development as recently as December.

Given that it’s been half a decade since Valve released Dota 2, it’s easy to understand why some fans are still skeptical of the company’s apparent return to active development. But we’ve seen enough of Artifact to know that it’s real, and their acquisition of Campo Santo reinforces that they want a broad, diverse portfolio of new titles going forward.

A web redesign doesn’t say much on its own, but with a new Steam UI on the way alongside multiple new games and the promise of more mystery projects in the future, Valve’s efforts certainly point to an attempt at rebranding as they refocus on software development. For those disappointed by the company’s focus on maintaining old standbys like CS:GO, Dota 2, a TF2, it’s certainly a welcome sign of things to come. 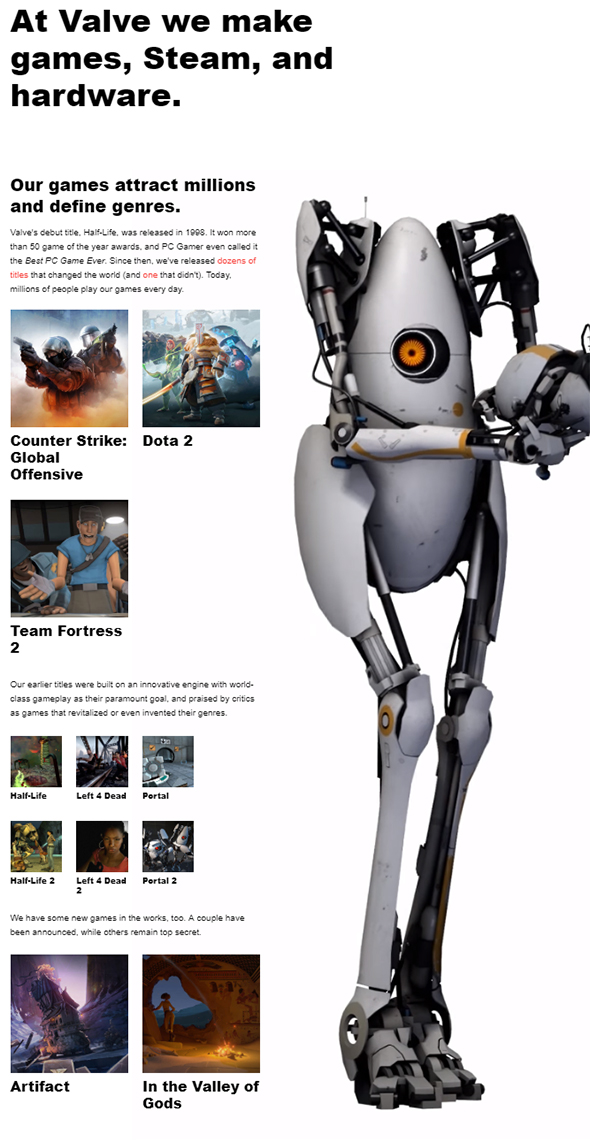 Update, March 9:Just to put the implication of his words beyond any doubt, Newell says “Artifact is the first of several games that are going to be coming from us.”We know three of these titles will be in VR.

Newell also explained why Valve have been focused on hardware and tech over the past several years. It all stems from concern that companies like Microsoft and Facebook had been hoping to emulate “the kind of closed, high margin ecosystem that Apple’s done,” whether with Windows, phones, or VR. “That started to really worry us, because we thought that the strength of the PC is about its openness… so we started to make some investments to offset that.”

Those investments have ensured that we have at least one open platform for VR in the HTC Vive, but have also bolstered Valve’s hardware design expertise.

“Now there’s pretty much no project in the hardware space that we wouldn’t be comfortable taking on,” Newell says. “We’ve always been a little bit jealous of companies like Nintendo. When Miyamoto is sitting down and thinking about the next version of Zelda or Mario, he’s thinking what is the controller going to look like, what sort of graphics and other capabilities. He can introduce new capabilities like motion input because he controls both of those things… That is something we’ve been jealous of, and that’s something that you’ll see us taking advantage of subsequently.” 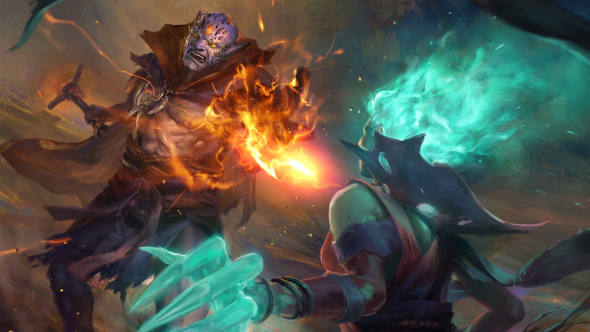 Newell says they’ve done plenty of work in making other people’s game’s successful, calling out PlayerUnknown’s Battlegrounds – now by far the most popular game on Steam – as a particular example. Valve’s efforts in building the Steam platform and new bits of hardware have been a “bunch of work,” but that work hasn’t resulted in new games.

Valve will continue working on hardware, but this will go “hand-in-hand with software design.” That seems to mean thatArtifact’s 2018 release datejust marks the start of new game launches from Valve, who haven’t published a standalone title since Dota 2 in 2013, aside from the VR collection The Lab.