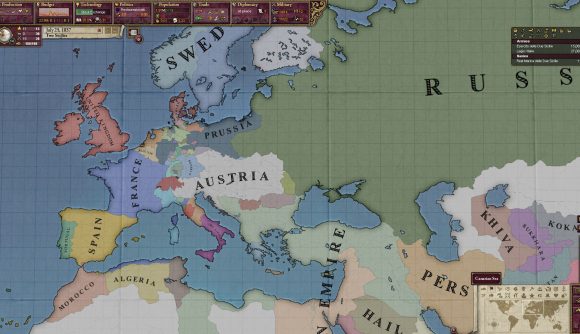 As you may remember, during Paradox Interactive’s recent Paradox Insider event, the company announced that a brand new grand strategy game was going to be announced during the annual PDXCon event in May. Naturally, I joked and said that it could be Victoria 3, but fans on Reddit are now hotly debating whether it actually will be Victoria 3 or not.

The main thing that’s got everyone worked up is a bunch of information that’s been brought up by user LocalPizzaDelivery in a reddit thread. Essentially, someone potentially affiliated with Paradox trademarked the victoria3.com domain back in 2014, as well as a bunch of other domains. I have my own reason to believe Victoria 3 was genuinely being worked on back then – the question is whether it’s still being worked on, and whether or not it will be the next game to come out.

What LPD goes on to highlight though is how the domain information for the Victoria 3 domain is different from some of the others registered, hinting that it was perhaps a more genuine registration as opposed to a land grab. User hesseb is supporting this theory, and has started their own lengthy thread on the subject as well, mainly looking into the company that owns the Victoria 3 domain and the implications that has.

Between the two threads there is some pretty wild speculation, and a lot of hope. Of course, for every person talking about how Victoria 3 is real, there are others who don’t think it’s likely, like winterkid11:

I don’t think this is the year of the 3, lads. from paradoxplaza

This thread is looks at recent job listings on the Paradox careers website that indicate a non-historical grand strategy game is in the works. Whether it’s the one being announced in May is anybody’s guess. Others, like Supermouser, are simply betting people real money that it won’t happen.

Aside from a new Victoria game, guesses as to what the announcement might be include Europa Universalis 5, Stellaris 2, or a new IP that many hope will be in the realm of fantasy.