Viewsonic aren’t the biggest name in gaming monitors, but if you’re after a gorgeous G-Sync panel, but can’t quite stretch to the Asus ROG Swift PG279Q, the XG2703 is a more than capable alternative.

Check out our current pick for the best gaming monitors around right now.

With a seriously high refresh rate, a beautiful panel and Nvidia’s G-Sync frame synchronising technology Viewsonic’s XG2703 makes for a monitor that is incredibly easy on the eye, even if at $700(£699) it isn’t quite so gentle on the wallet.

There may not be any quantum dots laced together beneath the almost grainless matte panel cover, nor does it have a curved screen, a 21:9 aspect ratio or any HDR pretensions, but as of right now those are all secondary considerations to a well-made panel delivering crisp, colourful slick visuals.

Click on the jump links to get to your section of choice. We’re all about choice here at PCGamesN… 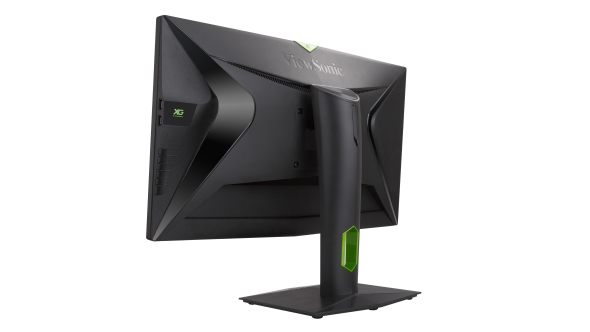 You may well recognise the key specs for Viewsonic’s gaming screen and that’s because it’s using a similar AU Optronics AHVA IPS panel to the two monitors we recommend as our favourite gaming monitors right now. They’re not identical, though it’s tough to tell as they all offer the same 165Hz refresh rate, native resolution and excellent image quality. The only real difference I can tell between the difference AUO panels Asus and Viewsonic have used is that the XG2703 has a lower peak power consumption than the PG279Q on the comparable specs sheets.

That aside the only difference between this Viewsonic, the Asus Swift and the Acer Predator comes from the price and the overall design of the monitor chassis. The IPS-like panel (they can’t actually call it IPS because of LG’s patents on the technology) can be overclocked to hit 165Hz as its operating refresh rate, making flinging windows around your desktop a super smooth affair.

Don’t be scared if the thought of overclocking your monitor fills you with oh-my-god-my-$700-monitor-has-blown-up kinda dread though, all that means is you have to delve into the screen’s settings and select the ‘overclocking’ feature to hit the desired speed. There’s no other warranty-invalidating tweakery involved.

There’s no denying that the Viewsonic XG2703 has been aimed squarely at the gaming audience either, even ignoring the G-Sync support and RGB LED in the stand. There’s only a pair of video inputs and a 4-port USB 3.0 hub behind that lovely AUO panel to talk about and none of the extras you might expect to see from studio or productivity screens. You only get G-Sync support via the DisplayPort connection, so it’s not surprising there’s only one full size DP socket and a single HDMI port for… well, just for the hell of it I guess.

It does have a full tilt, swivel and height adjustable stand, in angular black plastic, and a fairly sizeable bezel around the outside of the screen. This is no slimline designer screen, this is a monitor designed for you to look through, not at. 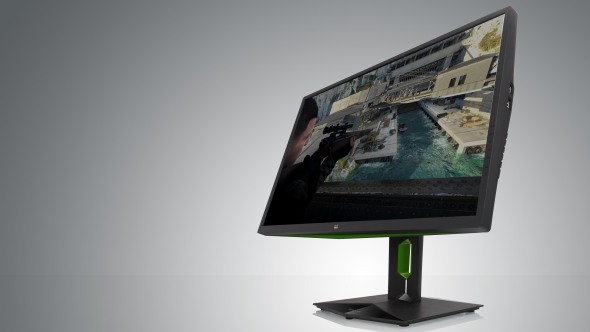 As you might expect from a panel that to all intents and purposes shares its make up with the excellent Asus ROG Swift PG279Q the image quality is brilliant. It’s sharp, crisp and colourful even if it can’t quite match the extreme vibrancy of the Samsung C24FG70 with its quantum dot filter.

The Viewsonic XG2703 still has really impressive contrast performance though, allowing clear delineation between different shades, particularly at the darker end of the range. In-game that contrast really helps; in Resident Evil 7’s sickening, dimly-lit interiors it allows you to make out more detail in the shadows (whether you really want it to or not) and when romping around Hitman’s luxury Bankok hotel the blazing sun blows out the visuals on other panels while the Viewsonic’s contrast lets you make out the finer details despite the solar onslaught.

Part of that contrast performance is the impressive white saturation and really impressive black levels. Normally IPS panels struggle with the darker hues and yet the AUO screen in the Viewsonic manages VA-like black levels.

There’s only a very slight, almost imperceptible, darkening at the very edges of the panel, but there is otherwise no colour shifting across the panel. The viewing angles are also typically good for an IPS-a-like display.

The motion of images on-screen is excellent too. That 165Hz refresh rate is glorious and especially silky on the standard Windows desktop. That translates through to gaming too where, even if G-Sync is doing its thing or not, the motion is clear with none of the blurring I’ve seen on some high refresh rate VA gaming panels. And with G-Sync on, and the frame rate high, it makes for a beautifully slick gaming experience.

Viewsonic have though had a bit of a fail around the controls though. There are six identical buttons behind the right hand side of the screen which correspond to the on-screen display, but because they are out of sight it’s actually quite difficult to know you’re pressing the correct button without physically counting down from the top. It would have been useful to have the power button separated out and maybe some buttons with a different tactile feel to give you an idea which one you’re pressing before irrevocablychanging the language to simplified Mandarin.

Via those controls though you do get access to the different gaming profiles Viewsonic offer for the XG2703. There are two user configurable profiles, two FPS profiles, an RTS one and finally one designed for MOBAs. Or you can just turn them off, because the standard profile delivers bright, crisp, colourful imagery, while the others seem to put a bit of a filter over proceedings, sometimes muddying colours or making detail indistinct, rather than necessarily improving the visuals. 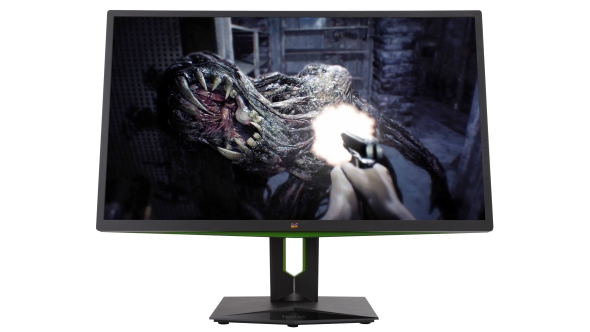 I hate to be so utterly money-oriented about this, but your choice to buy the Viewsonic XG2703 is going to depend on how much it costs when you’re looking to make your purchase and how much the Asus and Acer rivals are retailing for at the time. When the three screens are so intrinsically linked in terms of specs there is precious little else with which to differentiate.

All things being equal I would probably still opt for the Asus ROG Swift PG279Q. The chassis is simple, but stylish, the out-of-the-box configuration is excellent and the controls as good as you’re going to get. But because the panels are so similar I would struggle to justify paying extra for it over the XGF2703 – and the same goes for the Acer Predator.

That’s agonising over the finer financial points when the Viewsonic XG2703 stands up as one of the best gaming monitors around right now. If you picked up any of the three screens I’ve been talking about here you would be a very happy gamer indeed, and continue to be so for the next few years at least.

There will come a time when 4K monitors are what we recommend as the pinnacle of gaming screens, but it has not come yet. Right now the sweet spot for imagery, clarity and gaming performance is the 1440p level and the Viewsonic XG2703 is one of the three best 2560 x 1440 monitors you can pick up today.