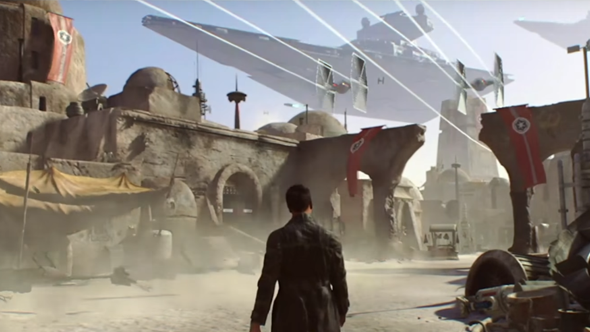 Plenty of big game publisher have taken a beating from the internet mob this year over microtransactions and other controversial bits of business, but none more so than EA. Between the closure of Visceral, the uncertain future of single-player games, and the loot boxes made central to Battlefront II’s progression, the publisher hasn’t been winning much goodwill from the audience.

Why is Battlefront II such a mess? We break it all down in our full review.

That’s in reference to Visceral’s Star Wars game, which was cancelled last month alongside the closure of the studio. According to EA’s internal reviews, it looked like a “much more linear game, that people don’t like as much today as they did five years ago or ten years ago.” This statement stands against comments from CEO Andrew Wilsonearlier this month, where Wilson emphasized a move to service games wasn’t the reason the project was cancelled.

While Jorgensen’s comment about linear games will certainly sting for fans of traditional development, it wasn’t the only factor in Visceral’s closure. Inside reports suggest that the game was suffering far greater internal strife than external pressure from EA, and Jorgensen adds that the shut down only happened after it became clear the game wouldn’t be able to recoup its development costs. Jorgensen says they had to “cut the bridge when you realize can’t really make a lot of money on something.” He adds that many former Visceral employees are being re-employed at other EA studios.

The unfinished game itself is in much more questionable condition. The announcement of its cancellation still suggested there was room for it to be rebooted, but the publishers haven’t decided whether they’ll be attempting to salvage the existing pieces with another studio, or simply bring those pieces into other games.

Jorgensen’s comments here come from the same conference where he suggested cosmetic items wouldn’t be a good fit for Battlefront II.