We’re not going to keep you waiting… HTC’s new Vive Wireless Adapter is going to cost $300, but only if you’re pairing it with the original Vive headset. If you want to cut the cable on your Vive Pro then you’re going to need to fork out another $60 for a special connectivity kit which includes a different cable, a different mounting device, and some extra padding.

But it is something we’ve desperately wanted from our VR devices since we first strapped one to our heads, tripped over the cables, and almost strangled ourselves in the ensuing tentacled chaos. And the new Vive Wireless Adapter works brilliantly – it’s the same DisplayLink adapter we used when we saw Intel at CES in January and uses the same 60Hz WiGig spec and DisplayLink codec we first tried out in prototype form at the E3 show last year.

Going cable-free is a liberating experience in VR and makes room-scale gaming far more immersive. You’re not being pulled back into the real world every few minutes with the very real fear that you’re getting ever more tangled up and about to pull your PC off the table and onto the floor.

The 60Hz Intel WiGig connection allows for even the higher resolution of the Vive Pro to be fired flawlessly to and from your PC without any visible latency being introduced. Which is a good thing as that’s a one-way ticket to Vomitsville. 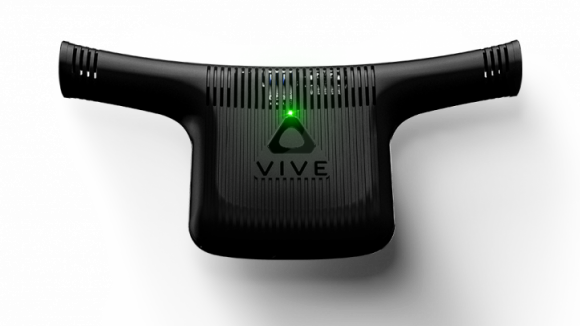 It’s got a 6 metre range and a 150 degree field of view from the sensor. And in order to power the wireless kit and the Vive headset you do need a battery and the adapter comes with a HTC QC 3.0 PowerBank, which can also double as standard charge pack for your mobile devices too… which also means that if you have another powerbank with the same level of output you should be able to use that as a substitute battery when the official HTC one runs out of juice.

HTC reckons that the 10,050mAh battery will power the setup for around two and a half hours of non-stop VR gaming and can be charged to 100% in less than an hour.

But realistically with the Vive Wireless Adapter costing $299 (£299), at least, it’s a lot of cash to be dropping on a VR accessory, though it’s not really being introduced for the casual VR player at home. Sure, it will make your home Vive setup a much improved thing, but I would bet the wireless experience has been introduced primarily to aid Vive’s enterprise customers – those using the headsets for a more professional experience, or in virtual reality arcades.

Once it’s introduced as standard into the next generation of VR devices then it will be something for the home user, but for now it’s almost the same price as a new headset.