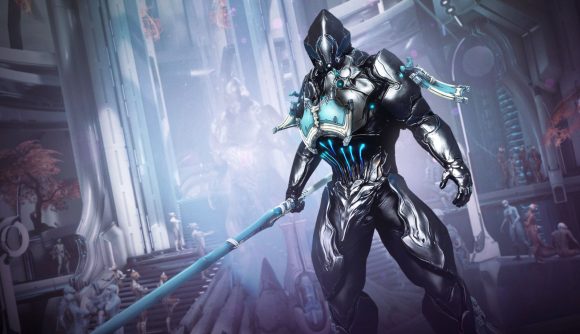 Digital Extremes has announced that the upcoming celebration of all things Warframe, TennoCon 2021, will feature the first gameplay reveal for the shooter’s next big expansion, The New War. Attendees will also get to experience “a one-time interactive preview event featuring a sneak peek of exclusive new content” during this year’s Warframe fest.

The New War gameplay reveal will take place during the event’s TennoLive broadcast on July 17, which virtual attendees can catch at 10pm BST / 5pm ET / 2pm PT, Digital Extremes explains in a press release. The studio will also host a “relay” event that’ll take place in-game, which lets Warframe players team up with pals from around the world – including some folks from DE – for the interactive preview event of The New War.

There have been rumblings of the coming expansion for quite some time, with it first being revealed back at TennoCon 2018. Since then, there have been other teasers and in-game nods and build-ups to the coming content, but now we’ve got our first really good look at what The New War will bring when it arrives.

“We’ve spent a lot of time talking about The New War on dev streams and at past TennoCons. We’ve shown cinematics, added in-game messages and lead ups, and now the wait is over… we are so excited to finally provide some answers and give everyone a small piece of what’s to come with The New War,” says Rebecca Ford, Live Operations and Community Director at DE.

“We’re thankful for the patience of our players and we look forward to seeing their reactions to some of our big reveals in the chat. Their support creates this event, it gives players all over the world the opportunity to celebrate together each and every year. And this year, we have a special in-game preview event that players will appreciate.” 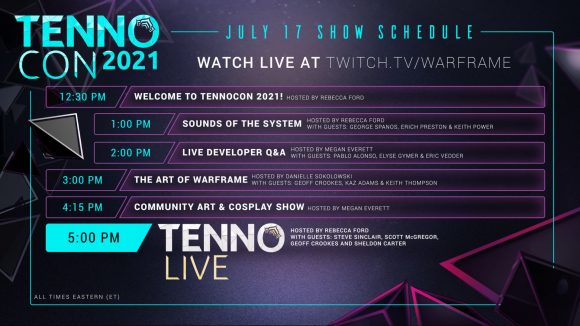 Additionally, there will be some goodies up for grabs during the event, which attendees can get by tuning in. For example, you can earn a Vastilok Gunblade weapon via Twitch and Steam drops by tuning into the show for 30 consecutive minutes between 5:30 and 10pm BST / 12:30pm and 5:00 pm ET / 9:30am and 2pm PT. At the end of the TennoLive in-game Relay event, a Tannukai Longsword skin and armour set will drop, which you’ll have to be present to qualify for. Then, watching for 30 consecutive minutes between 10pm and midnight BST / 5pm and 7pm ET / 2pm and 4pm PT during TennoLive will get you a Loki Prime Warframe with slot.

For full details on TennoCon 2021, head to the studio’s website at that link.