Free-to-play can be a dirty word in gaming, and the promise of a triple-A free-to-play game comes with plenty of caveats. Yes, the game will try to get your money, but is that really a surprise? Yes, it has more cosmetic tat than a thousand pre-order bonuses combined. But no, actually, the gameplay isn’t shonky. Nor are the graphics just serviceable. In fact, Warframe is surprisingly pretty, and its forthcoming cinematic questline – The War Within – will go a step further when it launches sometime this November, effectively sticking two fingers up at your expectations of free-to-play gaming.

More games that won’t hurt your wallet? Check out the best free games on Steam.

Volumetric lighting, dynamic weather systems, player lighting and motion capture courtesy of Digital Extremes’ own in-house studio – The War Within adds all of this to an already handsome game engine (mind-blowing to consider it came out three years ago now), which should make carving your way through the new missions and areas a visual delight.

I was shown a playthrough of an infiltration mission set on a Grineer ship, a hulking, industrial monstrosity that wouldn’t look out of place in a Games Workshop title. The ship is littered with searchlights and automated scanners doing their absolute best to hammer in the effects of Warframe’s new lighting tech, bouncing and ricocheting off everything in the environment in a blinding, oppressive assault on the retinas.

Passing by the guards and security scanners without triggering an alarm looked impossible, but Warframe is all about being a ninja, so I suppose I should have seen the pirouettes, dashes and high-flying parkour coming. In a matter of seconds the player has killed three grunts and danced their way through the main gates. Things get messier from that point on, with the neat stealth kills turning to equally swift eviscerations at the end of an impressive set of tools, from rapid fire shurikens to dual-wield shotguns. Explosions, eruptions of blood and bullets all join in the visual feast.

Eventually, the player arrives at the planet-destroying cannon they’ve been sent to put out of action. Here, things get more formulaic, except with all the hop, skip, slice, jump parts left in; keycards are involved. The kinetic slaughter continues as the player goes on the hunt for the two keycards needed to take control of the gun, the pace of gameplay increasing from super sleuth to speedrun, but with none of the poise or purpose amiss. Keycards acquired, they return to the gun, aim it at a nearby Grineer ship, and destroy it.

Once the gun is out of action and the player makes their escape, it’s mission accomplished. Spectacle, gameplay variation, visual flare and some overarching importance to back it up. Cram Kit Harrington in there and you’ve got the next Call of Duty campaign.

But why are we here, reducing the Grineer to bits of scrap metal rather than unearthing the origins of the game’s still mysterious protagonists, the Tenno? 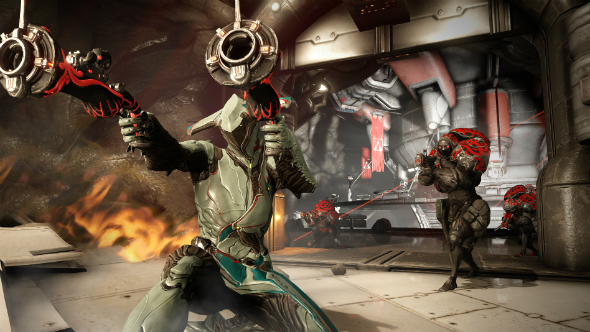 Digital Extremes’ first cinematic quest, The Second Dream, was the first to shed light on the Tenno, a race of post-human warriors who have awoken from cryosleep to find themselves under threat and at war. That storyline blew the lid on that mystery, and ever since players have been searching for additional clues about Warframe’s various factions, history and still mysterious Tenno.

Which is exactly why I was only allowed a look-see at The War Within’s endgame missions. Despite its age and focus on gameplay, Warframe’s lore is increasingly important to its players. Digital Extremes know it’s also important to the game’s future, which is why they’re adding to the lore wherever possible, especially through narrative updates like The War Within that effectively retrofit Warframe with a narrative that would – ideally – have been there from the start.

“Warframe’s a really, really strange, almost mutated animal,” explains live operations and community producer Rebecca Ford, “because what we launched with, you could show screenshots side-by-side, and to me it’d be almost comedic because we’ve changed so much in that time. It’s taken us three years to get the game to this much content, this much polish. It’s been quite a journey, and I don’t think we could have anticipated the journey to go on for this long.”

The War Within is the type of content that’s been borne out of assurance. Here, cosmetics, new suits of armour and items take a back seat, while narrative and gameplay come to the fore. At three years of age Warframe is still routinely nearing its peak for concurrent players on Steam, a peak that was set at 66,308… this March. It’s also the first major update that won’t include a new Warframe – the titular suits of armour that players can either buy or unlock through play – which is a big deal, believe it or not. 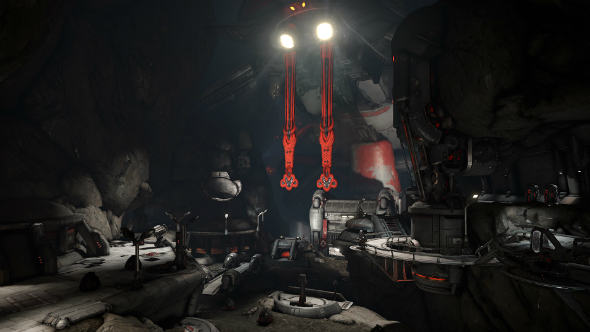 While loot, levelling up and acquiring new items is always at the centre of Warframe, according to Ford, players ask the most questions about the characters and the world rather than what the best weapon is. “We’ve added characters and given them a bit of VO, but we’ve never really given them a serious cinematic quest experience. So as a company, we grew bigger and got support from our players, we actually built a mocap studio in house, that allowed us to embrace the idea that we can really pull off cinematic quests now.

“So with the technology falling into place, the players’ drive for more and our realization that this game is sticking around… [we thought] players love the world we’ve built, so let’s fill that world. All those motivations came together and by the end of the last year we revealed this quest [The Second Dream], and their reaction has never left our minds. It was exactly what players wanted for the lore and for the depth and polish of the quests that we could deliver. So that kind of kicked us into gear to do another one.”

For Ford, expanding the lore is essential to Warframe’s future, not just for its current player base, but for potential newcomers that might see it as just another free-to-play title. “One of the biggest challenges we have,” says Ford, “is how much credit a player is going to give Warframe at the top level. It’s free-to-play, and sometimes free-to-play gives it a ‘This isn’t going to be anything special’ kind of expectation, and that’s a huge obstacle for us.” 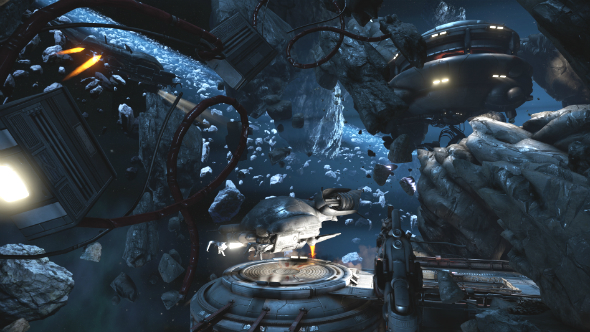 Looking at The Second Dream with all of its revelations and set piece moments, it’s not hard to see why Warframe’s players are so attached to the game’s world. Genuinely emotional content in a free-to-play game is rare. In the two years of play many will have accrued preceding The Second Dream, not a lot was known about the game world – like Dark Souls, most of it has been gleaned from item descriptions, cryptic cutscenes and the environment. Suddenly, Digital Extremes dropped a dramatic storyline into their game, one that was well executed, smart, full of surprises, and awaiting closure.

Ford has hinted at The War Within promising more of the same: gameplay surprises, more reveals about the Tenno and other key characters from the universe, environments that players will be surprised to play in. The only bit that sounds remotely free-to-play is talk of new areas being unlocked on the game’s Star Chart and additional missions.

That Digital Extremes’ biggest update of the year is entirely lore-focussed says a great deal about the game they want Warframe to be, one that escapes the negative connotations of free-to-play gaming. Warframe’s been head and shoulders above other F2P titles where graphics and gameplay are concerned for some time now, but by bringing its narrative full circle Digital Extremes hope to take the game one step further.

Excited for The War Within? Let us know why in the comments below.