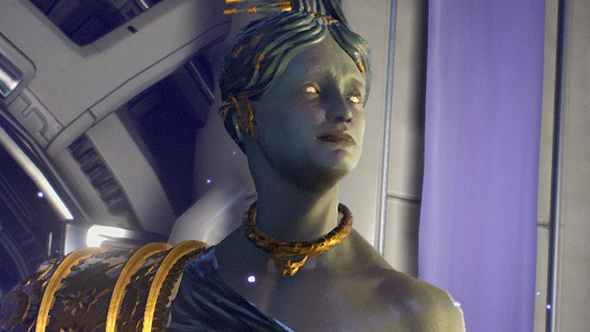 A couple of weeks ago, the Warframe Twitter account teased a new weapon, one wielded by the mysterious Ballas. The Orokin Executor has been hinted at for ages, and now we’ve got a slightly better clue of when to expect more of him in-game.

Ballas requires an Orokin Weapon befitting of his status.

The Warframe Art Team delivered this awesome WIP version you can expect in the game soon! pic.twitter.com/TC6nNcIRts

“This is something that seriously hinged on how we dropped a cliffhanger at the end of our player base last year,” community director Rebecca Ford says, “where this character, they’d heard this character for years, but never actually seen him, he sort of appeared and this is the weapon he has equipped.

“Everyone was asking ‘what’s that weapon’ and we sort of teased to players that, well, maybe once you finish the third act in the trilogy of Warframe’s origin stories that they might find out. So this is our very tongue-in-cheek way of teasing that there’s more coming.”

Ford says not to expect these additions to make it into the current update, but we will be seeing more in the future. In the meantime, you can look to the Warframe anniversary update for a “free bonanza” of gift items, not to mention the upcoming weapons rebalance.