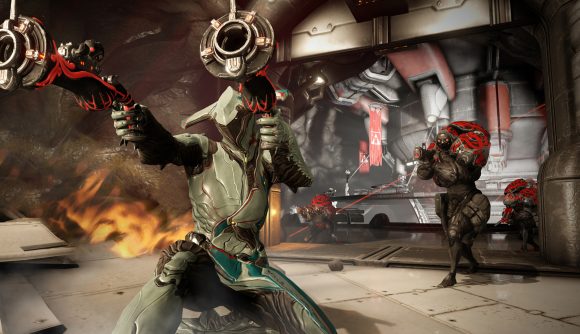 Warframe’s big annual fan event is – of course – coming back again for another round, and Digital Extremes has announced the details of what to expect from TennoCon 2019. This time, the developers are partnering with the Canadian Mental Health Association of Middlesex to bring a charitable focus for the convention’s fourth year.

There are more in-game bonuses for all ticket purchasers, including a Glyph, Sigil, armour set, digital art piece, emote, and some platinum, as well as “exclusive access” to Baro Ki’Teer during his TennoCon stay. If you can’t attend the event, you’ll be able to pick up the bonus items as part of a digital pack for $24.99 USD.

Whether you’re attending or watching at home, TennoCon is always an event to watch for Warframe fans – not least of all because it often brings us the full reveal of new Warframes.

There’s plenty more besides, from cosplay contests to an array of partnered panels. You’ll find much of it streamed on Twitch, or you can pick up tickets via the official site.

Related: Check out the best free games on PC

We got to talk about making Warframe’s guns with Digital Extremes earlier this month, and you can follow that link for plenty of insight into the process. The game is still going strong, and another year of TennoCon shows how dedicated the community still is after all these years.