The Revenant frame, codenamed ‘Vlad,’ was first seen in June during a developer stream. Pictured above, he’s an Eidolon-themed ‘affliction’ warframe, with some vampirism thrown in for good measure. Revenant has a passive lifesteal ability, and can afflict enemies to turn them into mindless familiars. Using that ability on an afflicted enemy again will cause them to start attacking other enemies and passing the affliction along, potentially creating large groups of mind-controlled drones.

You can play Warframe without spending a dime. Check out our full list of the best free games on Steam.

The other new frame is codenamed Garuda, and who Digital Extremes describes as a “vicious, gory Warframe that plays with her prey.” Garuda is also vampire-themed, and based on a velociraptor. We don’t have details on her abilities just yet, but Digital Extremes said they’re envisoning her as using raptor claw-styled weaponry.

Jordan captured an image of Garuda from the audience at TennoCon. 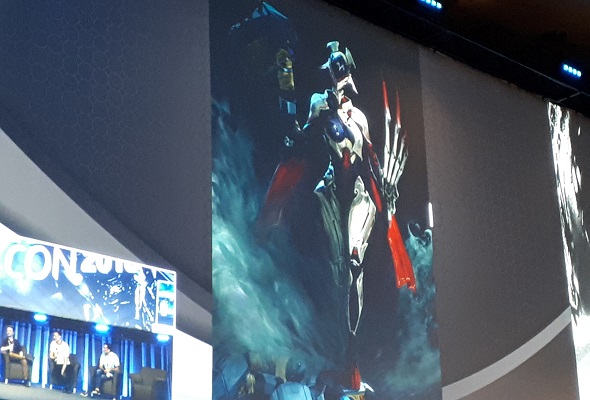 The new frames will make their way into Warframe as they’re tested and finished, but we don’t have specific release dates for them yet. Revenant is much closer to completion, though, and we can probably expect to see it before long.

Digital Extremes discussed the new Warframes during an art panel held at TennoCon, which will conclude with a live developer stream tonight, called TennoLive. You’ll be able to watch that here, or via Twitch.tv. Viewers will receive a free Warframe – Ash Prime – for tuning in.