Back in October, Digital Extremes launched their ambitious Plains of Eidolon update for Warframe. The update transformed Warframe into an open-world MMO in the vein of Destiny, enticing new players and giving veterans some much-needed room to breathe with greater expanses to explore.

However, when Matt explored the new area, he found it extremely hard going as a new player because he was able to meet enemies far above his level, ultimately leaving him frustrated rather than liberated by the update.

Digital Extremes are addressing the difficulty spike with the game’s next update – Shrine of the Eidolon.

Get in on the action. Play Warframe for free on PC.

Warframe’s Plains of Eidolon expansion nearly doubled the game’s peak player count when it released last autumn, but new players like Matt were finding it difficult to engage with the game, particularly due to the untiered high-level areas.

After the launch of Plains of Eidolon, Digital Extremes decided to conduct a survey to find out what players thought of the update. “We learnt that never before have players been so excited for this content type,” Warframe’s live opps and community director Rebecca Ford says. “It’s almost ten out of ten of people wanting to see more of the open-world exploration.” 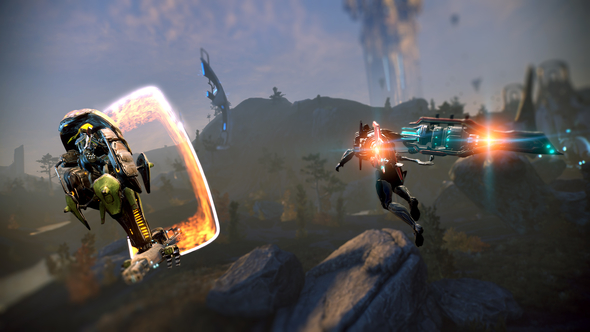 However, after “very, very strong feedback” from players about the untiered areas, Digital Extremes realised their mistake and added tiering several weeks ago to stop new players from wandering into high-level areas, capping the areas at mastery rank five.

In addition, the developers plan to rebalance both the Warframes themselves and their weapons after analyzing game statistics and taking on board player feedback. A move which has been praised by players.

It seems feedback is the driving force behind this update, with the developers aiming to hone in on what players love about Warframe, as well as what could be improved.

“[Players] really love killing things, and exploring, and fishing,” Ford continues. The survey suggested that grind was gruelling, however. The team want to address that in the update: “we wanted to make sure we balanced that economy better.”

Digital Extremes have been working to balance grind times since Plains of Eidolon launched, making rewards stackable and increasingly farmable. Last month, bounty rewards were made replayable and per stage bounty rewards were added, staggering the rewards players earn rather than giving one big pay-out at the end of a bounty run and resulting in the player waiting two hours until they can do it again.

Warframe’s Shrine of the Eidolon update aims to reduce long grind times and increase the rewards farmed from enemies.

Two new Eidolons arrive in that update – the Gantulyst and the Hydrolyst – both considerably larger than the Teralyst that came before them. Alongside these new enemies come new rewards. Veteran players will be happy to know the Eidolons drop a new item – a Riven Transmuter – that will essentially recycle unwanted mods into a new mod – one you should actually want – helping you complete your collection. 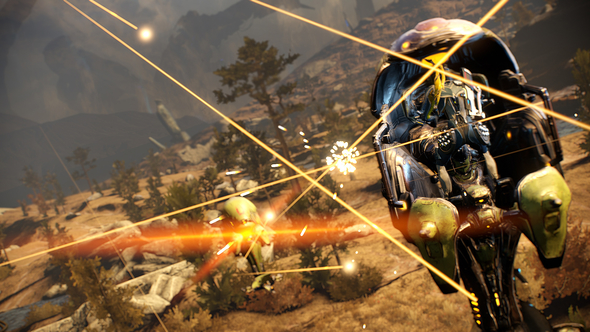 “In terms of the actual grind loops, it’s going to depend on how people take down enemies, because the pace of that will definitely determine how people feel about the reward structure,” Ford says, explaining the team’s changes for this new update. “For this reward that they drop it’s really something for the Riven part of the community, the collectors, the ones that want to make sure they have all their mods.”

However, Digital Extremes admit that striking the balance between what appeals to new players, as well as veterans, is a difficult one.

“I do think that we’re going to have to do 5% more thinking about how we can make this award appeal to everyone,” Ford continues, “so I’m hoping that we can stuff something in really quickly before it goes out to make sure that this reward is as rewarding as possible for as many people as possible.”