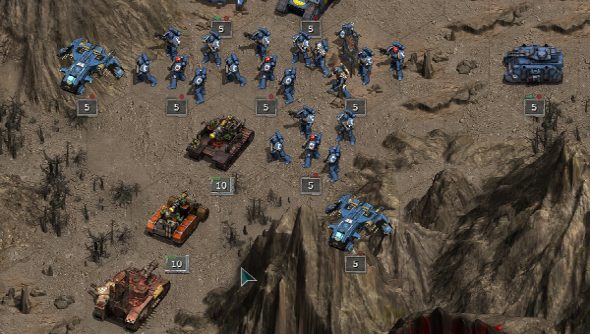 Warhammer 40K has given birth to plenty of video game spin-offs, but most of them are leagues away from the tabletop game, taking the universe and wrapping it around shooters, RTSs and even chess. Armageddon is a little closer to its source: a turn-based wargame with massive armies fighting for control of a world.

I had a chat with the devs back in May, where they said it was a “hex-based wargame that anyone can play”. That’s a bold claim, given that wargames are typically a bit obtuse and aloof, a criticism that comes from a place of love. You’ll be able to see if it manages to balance complexity and accessibility when it launches on November 26th.

Based on a 40K spin-off, itself inspired by World War 2 wargames, its mechanics aren’t taken directly from the tabletop version (Games Workshop doesn’t mind the setting being used, but is notoriously protective of other aspects), but still seems like its closer than most.

It’s a war between man and ork, with Space Marines, the Imperial Guard and the waaagh-mad orks covering the world of Armageddon in craters and bullets. Besides the threat posed by enemy warriors, there’s the planet itself to worry about: it’s inhospitable to say the least, with an entire season where it becomes a scorching furnace.

Making up the three factions are over 300 units with 20 different stats, and these units will grow in power and skill, carrying over to the next mission. Expect 30 campaign mission and branching paths, “historical” battles based on the source material and play-by-email multiplayer.

You’ve got three weeks to practise your waaagh cry.