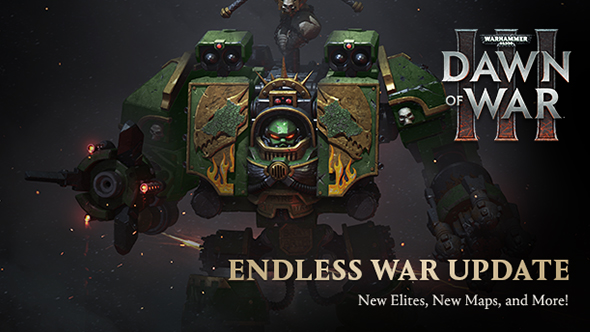 Dawn of War 3 is getting its biggest free addition yet with the Endless War update, bringing new Elites, skins, and maps to Relic’s RTS. That’s good news for existing players, but if you haven’t gotten gory in the latest DoW you’ll have just the chance with an imminent free weekend.

Here’s everything you need to know about Dawn of War 3.

Endless War includes a new Elite unit for each faction. The Ironclad Dreadnought joins the Space Marines, Orks get a fancy new Lifta-Droppa Wagon, and the Eldar get expanded psyker abilities with Wraithseer Kayduin. You can get a closer look at the new units – as well as the five new skins – in the trailer above.

The free update also adds three new maps. Shrine of Asuryan is a 1v1 arena pitting fire and ice against the backdrop of Eldar architecture, while Serpent Chasm allows 2v2 matches over the desert remains of long-dead sea serpents. Finally, 3v3 matches can go down on an oceanic Ork fuel rig called Da Extractor. In addition to the new maps, a handful of new custom match options will let you toggle Elites, Doctrines, and faction supers.

This is the latest in a series of updates Relic have been making to the game, ranging from improved modding support to a total rework of the progression system. Though we rather enjoyed DoW3 its changes haven’t set so well with many long-time fans, leaving Relic to address those concerns through new additions and updates – many of which they’ve already made.