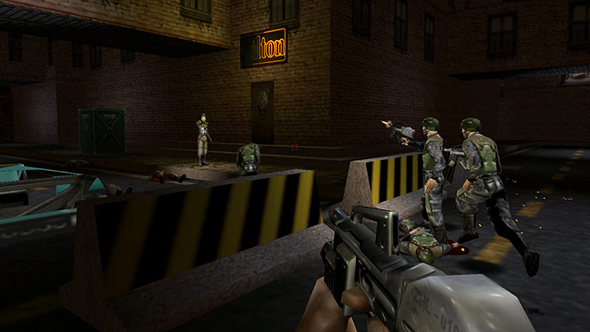 US president Donald Trump’s meeting on videogame violence yesterday was mostly uneventful, aside from a brief supercut of violent clips which is still available on the White House YouTube channel. One person who wasn’t a fan of the images on display is Deus Ex director Warren Spector.

Violence might be terrible, but sex is great, so be sure to check out our entirely serious and not at all comedic list of the best sex games on PC.

Though Spector says he doesn’t believe there’s any correlation between violent games and violent behaviour, he says on Twitter that “the videogame reel shown at the White House on Thursday is simply disgusting. Every shot is in colossally bad taste and everyone associated with those games should be ashamed of themselves.”

I don’t believe games cause violent behavior. Not for one second. However, the videogame reel shown at the White House on Thursday is simply disgusting. Every shot is in colossally bad taste and everyone associated with those games should be ashamed of themselves. They hurt us.

That’s a pretty sweeping statement, but Spector wants to be clear it’s the glorification of violence rather than violence itself that doesn’t sit well with him, especially when anti-game activists can use these instances to “shift the focus from real problems.”

Just to be clear, I don’t mind violence in games. The glorification of violence I mind a little. What I mind a lot is gratuitous, over the top depictions of violence. And to repeat, it’s not that games cause behavior it’s just bad taste and the damage it does to us with haters.

Some of the responses to Spector’s original tweet included people in the industry. A developer on Sniper Elite said he’s proud of his work, though he does acknowledge there’s room for nuance.

But I think that’s OK! There’s a lot of stuff I feel uncomfortable watching -some of the stuff from The Walking Dead goes a bit overboard for me, but I don’t think it ‘hurts’ TV as a whole, or that the cast and crew should be ashamed.

Gearbox CEO Randy Pitchford also wasn’t a fan of what Spector had to say, asserting that the video was built with a “propagandist mindset,” saying to Spector that the tactics having an impact “on a mind as disciplined and sophisticated as yours is disheartening.”

Your own games can be cut with such a mindset -pressed into the same service of highlighting depictions of violence to undermine art and expression. Such depictions are sometimes necessary if art is going to be useful to our species. Have you not read Shakespeare? The bible?

Many of Spector’s games have included violence, even if not to the same degree as the titles shown in the White House video, but he’s quick to point out that his titles featured alternatives to violence, and if he had it to do over again he’d make a few changes.

Good points. But I hope players were repulsed by the killing of children. And, easy for me to say, but true: I’m ashamed of the kid-killing possibility and wouldn’t do it again. Can’t promise, but I don’t think I’ll ever make another game where you can kill virtual people at all.

If you want to keep an eye on what Spector and the folks around him have to say, the discussion is most civil and continuing to take place on his Twitter feed.

Response to my tweet about the violent video game video are coming in fast & furious. Most are calm & well-considered. For those upset with me, I know the images in the video don’t reflect the vast majority of games & it provides no context. I get that it’s pure propaganda.