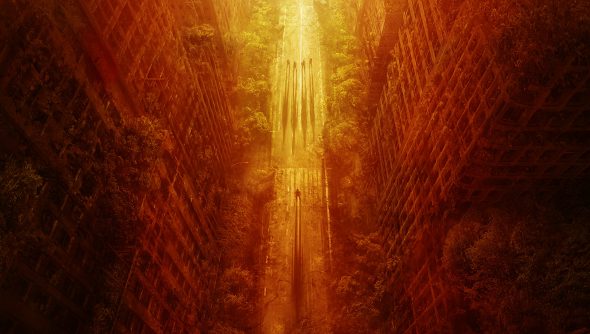 Wasteland 2 is a gargantuan tactical RPG and sequel to the 25-year-old inspiration for the Fallout series. It’s bold, but it’s messy, like the Desert Rangers that serve as its protagonists. The post-apocalyptic wasteland is familiar, evocative of the trilogy the original birthed, but travelling in a band of lawkeepers instead of wandering the wastes as an aimless adventurer changes things dramatically.

As I got ready for my first patrol, I had my squad of misfits and professional soldiers backing me up. I’d be facing mutant bunny rabbits, suicidal nuclear bomb worshipers and psychotic bandits dabbling in real estate. It’s a funny old world, and one that’s experienced in unconventional ways. 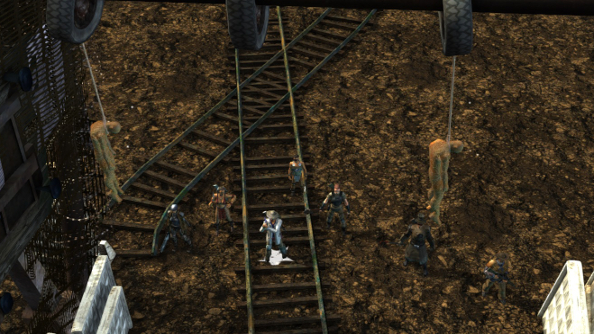 The Desert Rangers are not your typical RPG heroes. They saved Arizona fifteen years ago, but they’ve not been up to much since then. Bandits, monsters and robots now prowl the region they once swore to protect, and they are feeling a bit guilty about that. They did heroic things, but they aren’t heroes. They messed up big time and have led a lot of good people to their graves, but they aren’t villains. The Desert Rangers are just men and women who have realised that they need to do better.

That’s where Team Echo – the Desert Rangers I’ve been controlling for countless hours – come in. My squad of gunmen, demolitions experts, tech-heads and brawlers are not errant knights, a band of adventurers or on a suicide mission to save the galaxy. They are doing their job, but it’s a really tough one. That job is to patrol the mostly desolate Arizona wasteland (and eventually further afield) and answer radio calls for assistance.

A task that begins with creating a network of radio towers and expands into more familiar “fate of the world” territory runs throughout the game, but it’s easily forgotten. Too easily, perhaps. The main story rarely feels urgent, which chips away at its weight. This means that it doesn’t feel completely absurd to just bugger off and wander around the desert, though, and it’s while exploring the many miserable areas that make up Wasteland 2’s grubby world that it shines. 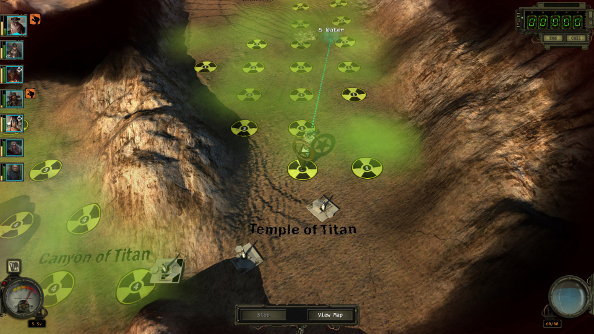 In Highpool and the Ag Center – two early locations – the Rangers need to go and fiddle around with the aforementioned radio towers, but things get out of hand. In Highpool, raiders are causing problems and everything is broken. In the Ag Centre, mutant rabbits and rabid flora are killing everyone. Those things seem more important than buggering about with radios.

These early crises are a high point of the game. Both areas are of supreme importance to the Rangers and Arizona in general, but choosing to solve the problems in one of them damns the other. Both places contain hours of content, a potential recruit to add to the squad and a great number of quests, but by saving Highpool, I ended up screwing over the Ag Center. The implications of my choice were made brutally clear as I continued to assist the people of Highpool. I was in the middle of solving a fairly clever puzzle with lots of doors, levers and a squad forced into splitting up when I got the call on my radio. It was bad news.

The leader of the Ag Centre was begging my CO, Vargas, to send Rangers – but of course, we were rather busy. The calls became more desperate; she was pleading, begging. And then, in her final call, she said we shouldn’t bother coming at all. It was too late. When I finally arrived, I was greeted by hellish scenes and lots of dead folk. I failed those people, and it weighed on me.

Despite playing with guilt and exploring the Rangers’ connections to the people they are duty-bound to protect, Wasteland 2 doesn’t do personal relationships. There’s no main character, nobody to romance, no real friends to make. The four squad members made at the start are blank slates that are filled up with stats and equipment. There are a lot of both. Dozens of gun specialisations, speech skills, technical talents and clandestine abilities – each character really needs to specialise. But they never really feel like people. 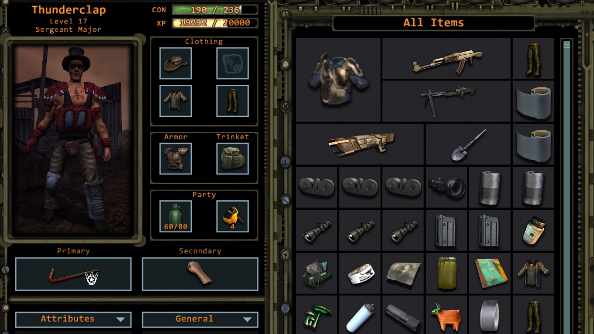 That didn’t stop me from injecting them with personality, though. Take my “muscle”, Thunderclap. He’s a surly Native American, a heavy smoker (he’s never without a pack of cigarettes), and his two favourite possessions are a top hat and a rusty pipe. He’s perfectly capable of using a gun, but he almost always ignores his pistol in favour of that blood-stained piece of plumbing. He’s not very friendly, either. When the group needs someone to be mean or threatening, they turn to Thunderclap.

New squadmates can be recruited, and they are actual characters. They make comments about the places the squad visits and they occasionally touch on their personal histories. But they don’t make much of an impact. Only three can be part of the squad at any time, and I happily switched them out when I found someone else with skills I needed. I didn’t really care about them as people because there’s little attempt made to flesh them out.

Instead of fostering relationships between the squad members, Wasteland 2 is more concerned with building a relationship between the team and the wasteland itself. It feels alive. The radio crackles to life, as other Ranger groups call home to report on their own activities. And as I wander through settlements or through the Citadel – the headquarters of the Rangers – people react to me; to my decisions. When I save folk, I see them again in new places, and I feel good about being able to make even a slight difference in their utterly awful lives. 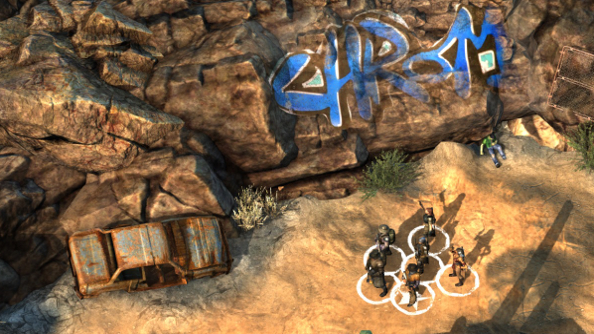 As I travel through the wasteland, I’m an ambassador, showing people what the Rangers can do for them. I’m greeted with disdain, often, when I arrive, but when I leave, they are thankful that the Rangers have started to patrol again. But that’s just because I’m a nice guy. I could have easily just ignored their pleas or slaughtered them all.

The existence of choice is not what makes Wasteland 2 refreshing. It’s the fact that the potential choices are not signposted or obvious, and frequently they are exceptionally creative. And joy of joys, they are rarely binary, even when they appear to be.

A violent dispute might task the Rangers with picking a side, but a little more work can unearth a middle road. This was the case in another early encounter, where I found myself acting as a mediator between warring clans. And, to my delight, even after I decided that I wanted to take the middle road, I discovered that there was more than one way to achieve my goals. I could be manipulative or I could be a dick, but both required specific skills. There was another, almost hidden, option though – and that forced me to use a bit of brain power rather than simply exploiting the skills of my team.

I could have just killed everyone, too. That’s always an option. It didn’t seem like the sort of thing that a Ranger should be doing, though.

When words and smarts fail, the guns come out. This is where Wasteland 2 is a mite disappointing. There is a lot of combat, and it’s all just a little simple. It’s turn-based and tactical, so expect to miss a target right in front of you when firing a gun because of numbers. That’s fine, though, but what isn’t is the dearth of tactical options to make up for the weird logic of not being able to hit a giant man standing next to you just because of statistics.

Battles mostly amount to finding cover and making sure all the squad members are in range of their targets. Melee rangers can “ambush”, which is like XCOM’s “overwatch” ability, but bizarrely, ranged combatants can’t do the same. They get to fire off multiple rounds instead, if their gun allows it. There’s also a headshot ability and that’s it. No targeting of body parts, no special abilities and no real stealth. Fights are won with stats and gear, not skill. 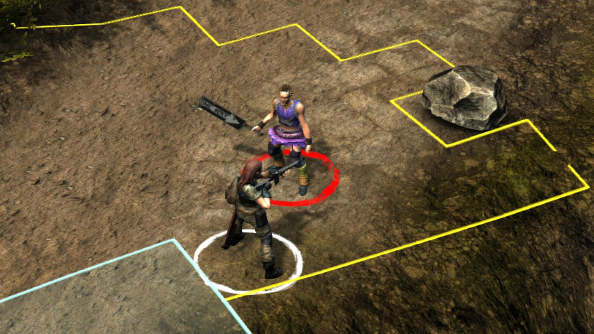 There’s a lot of gear, though – diverse weapons requiring different ammo, effective at varying ranges, some more likely to jam than others. Management is required, and that makes these otherwise simple conflicts a wee bit more gripping. Tension ramps up when a gun jams just before an enemy’s turn. A beastie that was just about to die suddenly becomes a threat again, maybe even a threat that hasn’t been prepared for.

Robots also improve violent encounters dramatically. There is one particular type of metal fiend whose sole purpose is to turn every fight into a party. The wee fella speeds into the fray and then lights up, making even the gloomiest battlefield transform into a disco. And there are the horrific, giant Slicer Dicer robots that leap around, carving humans up with horrible saws or bathing the area in zig-zagging death lasers.

The knowledge that something infinitely more interesting was right around the corner likely kept me motivated to power through the fights that didn’t have discobots and death laser monsters. The stories of this post-apocalyptic mess are compelling. It’s the small touches that elevate them. The larger narrative arcs are a bit staid, but high quality writing and a world that’s filled with oddities and eccentrics keeps them from ever being less than entertaining.

Its the flavour text that won me over, though.

Text constantly streams forth, typed out on an infinite paper scroll on the right of the UI. It’s rich, sharp and amusing in a way that doesn’t seem out of place even in this bleak world. Sometimes it’s even a bit poetic. The last thing you expect when you “examine” a series of corpses is cheeky alliteration.

Wacky is not a word I’d usually ascribe to post-apocalyptic hellholes, but the shoe fits here. Nintendo Powergloves turn up as loot, giant bunnies and gun-swallowing toads are not uncommon enemies and there’s an order of mad monks who protect themselves by detonating nuclear grenades strapped to their bodies. I also got far too much enjoyment out of a mission where the Rangers have to hunt down and collect shit. Feces. Poo.

The richness of the writing and quirky way that it describes the world is a bit at odds with how its presented visually. Character models are hideous monstrosities that don’t look remotely human and the environments – besides a few notable exceptions like the verdant Ag Center or the ominous airplane graveyard of Damonta – just aren’t striking at all. There are too many big, open spaces and paths where the only notable landmarks are bits of rubbish or a hut. Cavernous industrial complexes absent character or crappy shanty towns appear all too often.

I found myself less concerned about these things the more time I spent in the game. The writing shouldn’t have to carry the visual failings, but it does so very well. The world is brought to life through words more than images, but the picture the text builds is every bit as memorable as those that have the benefit of a more impressive art direction.

Wasteland 2 is huge. It’s not just the massive map, but the number of stories and the myriad ways they can play out. Though some moments left me disappointed, I always left the game eager to return. Inventive solutions to tricky standoffs, my failure to save a life, a silly line of text spotted in the corner of my eye – those are the things that stuck with me every time I pressed “quit”.