Wasteland 3 is a game of extremes, there are no half measures, no middle ground – only wrong or right, death by an obese dracula-impersonator or complete mercy, butcher everyone or walk free. It’s a game where you begin with a holy moral compass and it quickly weathers into ‘how does this benefit me exactly?’

It’s an apocalypse game where everyone is either a softly spoken sweetheart or a gut guzzling sycophant. It’s a fictional future of the most extreme depravity and it’ll force you into uncomfortable places and ask you hard questions. All the extremities and bloated stereotypes should be a hard pill to swallow, but you glug it down like it’s the apocalypse, and you haven’t had a taste of bitter bourbon in a long time.

Now, though, I’m stood in front of The Patriarch. After a bloody opening scene in which half my Desert Ranger squad, Team November, are decimated on entering Colorado, I’m quickly whisked through the tutorials for the remainder of the trek to reach him. He’s the ruler of Colorado, and we are seeking supplies and aid. He’s willing to help, for a cost.

I quickly learn this is the way of Wasteland 3 – everything comes at a cost. The Patriarch is a big-built brute with a sledgehammer he’s more than happy to use. He sits on a throne of empty rocket shells adorned with the American flag and speaks firmly in a low, authoritative tone. He’s one of the many stereotypes of the apocalypse: a blood-hungry gang called The Dorseys, who call the next phase of the apocalypse ‘The Deluge of Blood’; a pious cult of mechanical Ronald Reagan worshippers called Gippers; a group of corpse-tossing outcasts called Godfishers; and many, many eccentric lost souls that you’ll come across along the way. 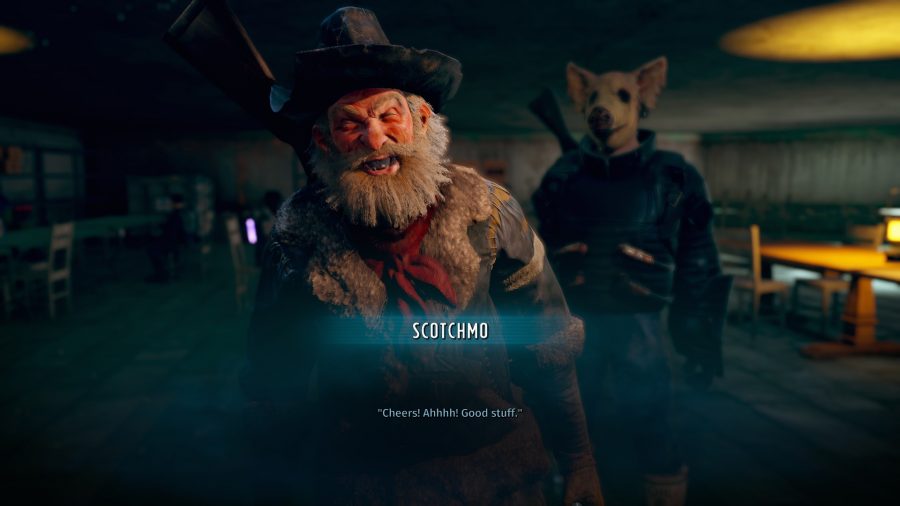 You can recruit some people as companions – two at any one time – along with up to four Rangers to form a party of six. It’s a good idea to choose a party that compliments each other, and Wasteland 3 does a good job at giving you polite nods in the right direction. The RPG elements in Wasteland 3 are mesmerising and addictive, there’s plenty to tuck into as you level up including perks, skills points, and attributes. I spend hours refining my ragtag gang of rangers and randoms, from cowgirl Lucia Wesson to the drunken hick Scothmo.

I push aside what is right, what is fair, and become utterly selfish in my decisions

I also have a tagalong called Major Tomcat, a companion of sorts, he’s a cat who aids in combat but doesn’t actually count towards my companion quota. I begin enamoured with Major Tomcat – look at his cute trilby hat and the way he scratches up enemies. But, in a nightmarish encounter, Major Tomcat falls. In events that should move me to tears, I walk away – what was he bringing to the party anyway? There are plenty of these disposable companions, from robot chickens, to a first aid dancing mech. What have I become?

Wasteland 3’s Rangers, however, don’t have any distinct personalities and remain mostly silent during your jaunt around Colorado. The companions are better as each have their own backstory and reasons for wanting to help out the Rangers, and these interactions throughout the game bolster their importance for me, but not enough to warrant my affection (or their revival if they perma-die). Don’t expect a lot of banter, though, apart from the occasional weird comment like ‘did you touch my gun’ and the fact I pour a lot of time into upgrading them, I still remain detached. Not that I mind, Wasteland 3 has corrupted me. 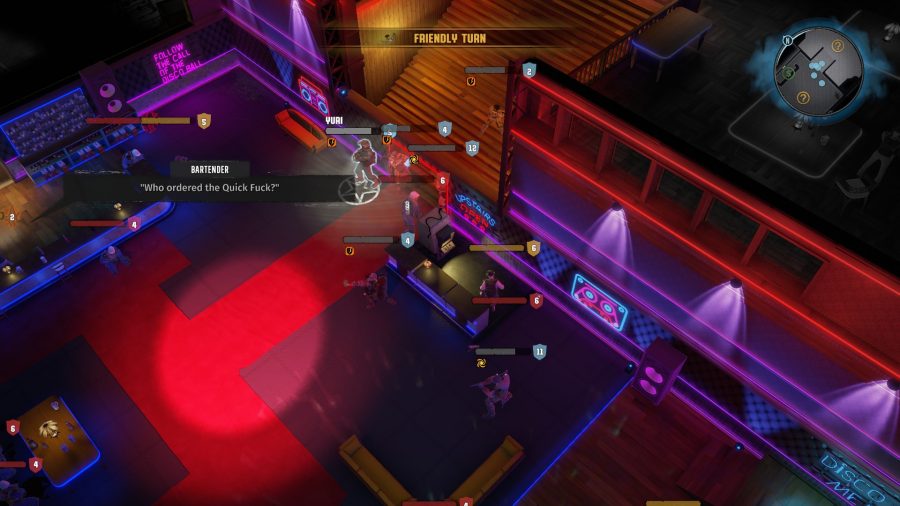 I go through about ten hours of gameplay feeling pretty comfortable and confident in combat, until I’m not. It’s in that moment I start to run out of ammo, supplies, medkits, and feel the full weight of my decision making. You can’t pick every fight in Wasteland 3, and you shouldn’t. Resources are precious and costly, and although there are tons of various side missions to gain money and rewards, it can sometimes cost you more in resources than it’s worth. You are in the frozen wastes, after all.

Related: Check out our list of the best RPGs for PC

Combat will fleece you of supplies and, although, yeah, it’s fun to fight, sometimes it’s fun to live as well. Encounters can’t always be avoided, though, as dialogue and progressing the game can be locked behind having enough of a certain attribute or skill to meet a criteria. 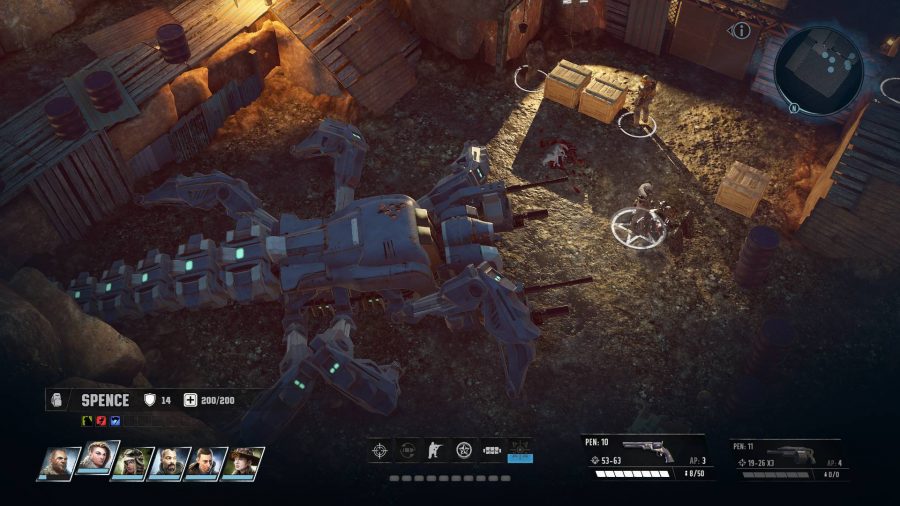 If you do find yourself in a fight, the turn-based combat starts off a little easy at the start of the game, and becomes a logistical fever dream of ensuring your squad is up to taking on each fight. This might be where you develop ‘favourites’, again not down to their compelling wit, but how much your Rangers and companions bring to the fight. The variety in enemies gives each fight its own flavour and requires you to think about your approach, making for some intense battles that I’ll remember for a long time.

There's no remorse in my actions, it's a cutthroat business and I'm here to do a job, to survive

It’s in these moments – when the gameplay audio dims and an old country song plays as a soundtrack to a fight, subsequently fading out in the bloody aftermath as I’m left surrounded by corpses – that it feels like it should be a time to reflect. Like the scene in Red Dead Redemption 2 when riding away from a shoot out to Unshaken by D’Angelo, thinking about how needless all the bloodshed is. Yet, I don’t feel that way in Wasteland 3 when the fighting’s over. There’s no remorse in my actions, it’s a cutthroat business and I’m here to do a job, to survive.

And survival is tough in Wasteland 3’s open-world, and although I’m free to explore, I usually only go to areas if a mission warrants it, getting around using the new vehicle called the Kodiak which you can pimp out in your Ranger HQ. As well as churning up the snowy roads and making mincemeat of bystanding deer, you can also use your vehicle in combat. I was never a fan of Phoenix Point’s equivalent mechanic, but it not only works in Wasteland 3, it’s pivotal to survival. 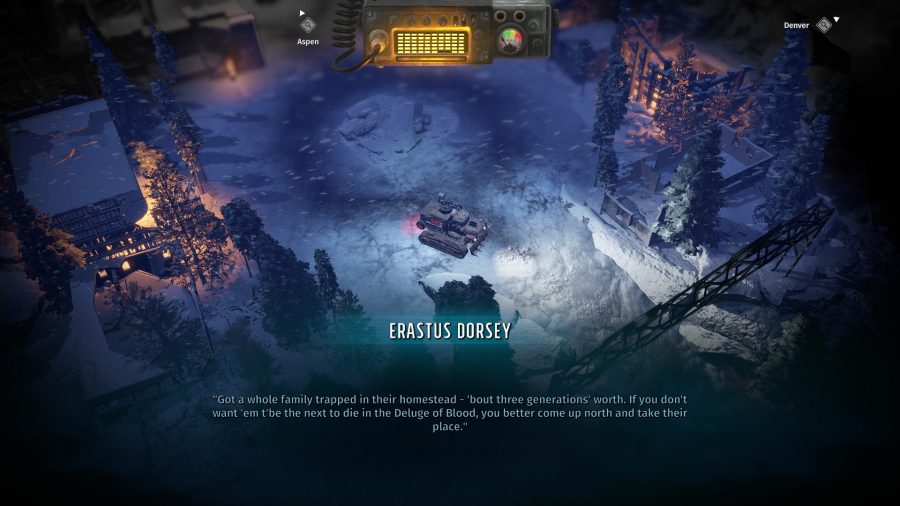 Using your souped-up snowmobile to explore Colorado is wonderfully authentic, although the loading screens between areas and the time it takes to navigate to each location can be a little tedious. You’ll also almost certainly be ambushed by road-side dwellers looking to steal your goods, or just fight you, because.

Squad up: Check out the best multiplayer games on PC

You can, and will piss people off, as well as earn a name for yourself in Colorado by completing missions or interacting with the right people. The fame meter can count for and against you, and balancing your relationships with all the different factions will always cause someone to dislike you, it’s just up to you who that is. I realise early on that +1 in reputation can quickly dissolve into a -15 with just one, wrong, reply. Like I said, everything will cost you. One of the first decisions in the game is severe, I had to take a moment to decide what to do, but that swiftly changes as the game progresses, I push aside what is right, what is fair, and become utterly selfish in my decisions. 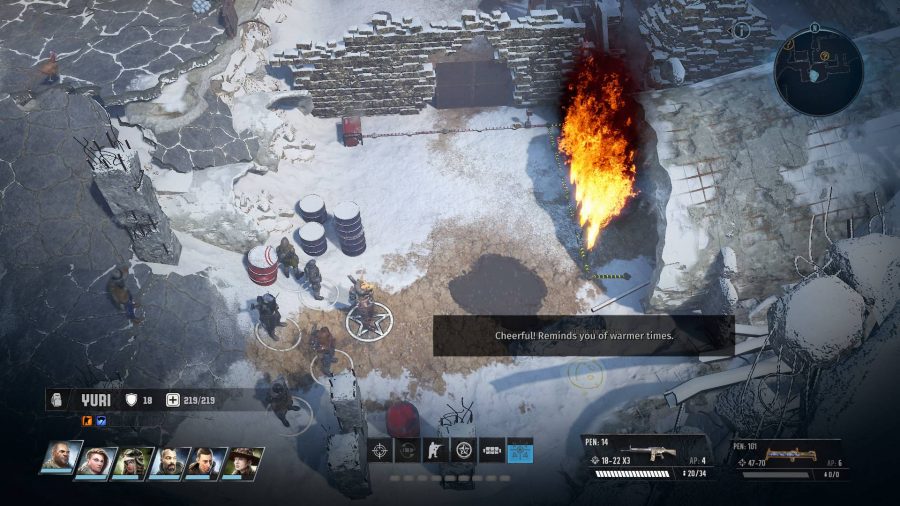 Wasteland 3 does offer moments of intimacy and nuggets of information in the overheard conversations or happened-upon interactions. You can glean information about the situation in Colorado, or follow a robot to hidden treasure, but it’s true that a yellow smiley face in the snow is the closest you’ll get to warmer times.

Although it doesn’t offer anything immediately innovative, it slams the nostalgia card down on the table in a brash, unforgiving way that makes this game incredibly moreish. It takes you on a moral journey and corrupts you, making everything you thought was so unfeasible about an apocalypse seem so normal. You can feel everything that it’s borrowed and given back to the Fallout series, along with the return of previous Wasteland characters. And if I could offer just one word of advice? TRUST NO ONE.