Looking for a list of the best apocalypse games on PC? There’s something about the end of the world that sounds more enticing than it probably should. No law, no order, and seemingly no consequences effectively turn the world into some kind of wild party. If anarchy isn’t your cup of the proverbial then you can spend your time exploring chaotic new frontiers, digging through the bombed-out ruins of a civilisation wiped out for supplies.

Whether it’s a zombie apocalypse, a robot uprising, or nuclear fallout, the post-apocalypse is ripe for narrative experimentation in all forms of media – and games take full advantage of the setting by letting you decide what kind of wastelander you want to be.

We’ve foraged and scavenged eight of our favourite apocalypse games below – offering everything from horror and heartache, to exploration and tactical combat. So, whether you’re after drama, action, or a huge playground to explore, we’ve got you covered.

Here are the best apocalypse games on PC. 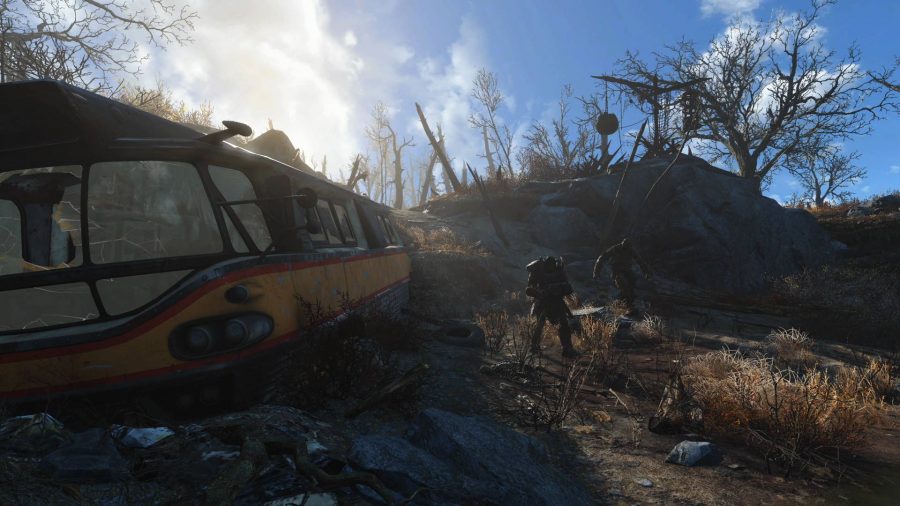 Fallout has done a lot to shape our collective idea of what a post-apocalyptic United States looks like, despite its retro-futuristic world and art style.

The original isometric games offer captivating adventures and endless role-playing opportunities, but it was the jump to 3D (and the transfer to Bethesda’s Gamebryo engine) that thrust Fallout’s aesthetic and world into the limelight. From Pip-Boys and power armour, to the insidious Vault-Tec corporation conducting social experiments across its hundreds of shelters, Bethesda Softworks took the world of those isometric RPG games and brought it to life with imagination, detail, and personality to spare.

The main storylines are rarely the highlights, instead it’s the bevy of weird and wonderful side quests that keep you hooked, feeding you more details about the world, or tasking you with making tough choices so you’re always left feeling equal parts saviour and scourge of the wasteland.

Besides, you can shape the latest entry into whatever game you like by sprinkling over some of the best Fallout 4 mods. 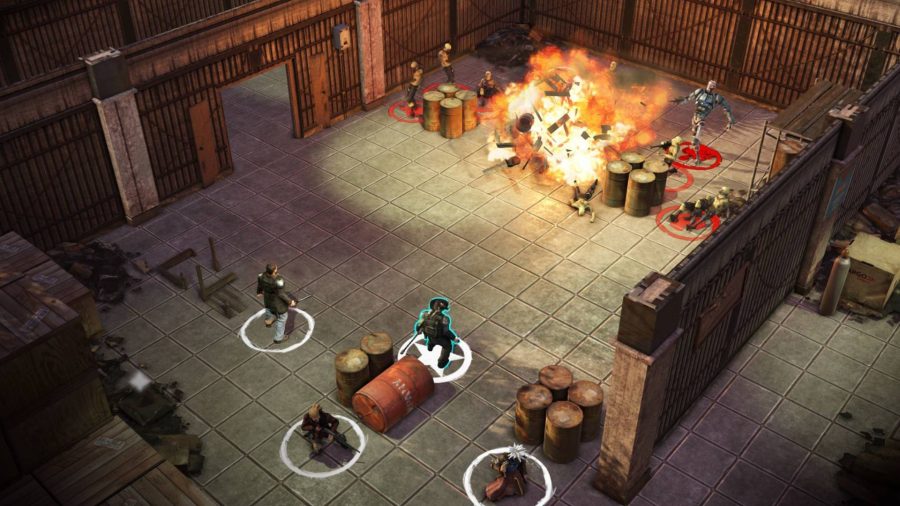 Having become the de facto spiritual successor to the aforementioned isometric Fallout titles of yore, the Wasteland franchise feels like the Fallout game many fans thought would never come after Bethesda assumed stewardship of the series, which is a curious twist of fate considering the original 1988 Wasteland was a key inspiration for Fallout’s designers. And while the Fallout series benefitted from the switch to 3D, Wasteland 2 does an admirable job of highlighting the best qualities of its top-down viewpoint.

Turn-based combat with potentially game-altering consequences can make Wasteland a tough challenge for those new to the genre, but in inheriting so much of the core DNA from it’s forebear, Wasteland 2 offers densely detailed environments full of tales of life before the bombs fell – silent classrooms, empty hospital hallways, and more help shake off the shackles of its overhead perspective. However, it’s the quality of Wasteland 2’s writing that brings a sense of immersion that most first-person games could only dream of. 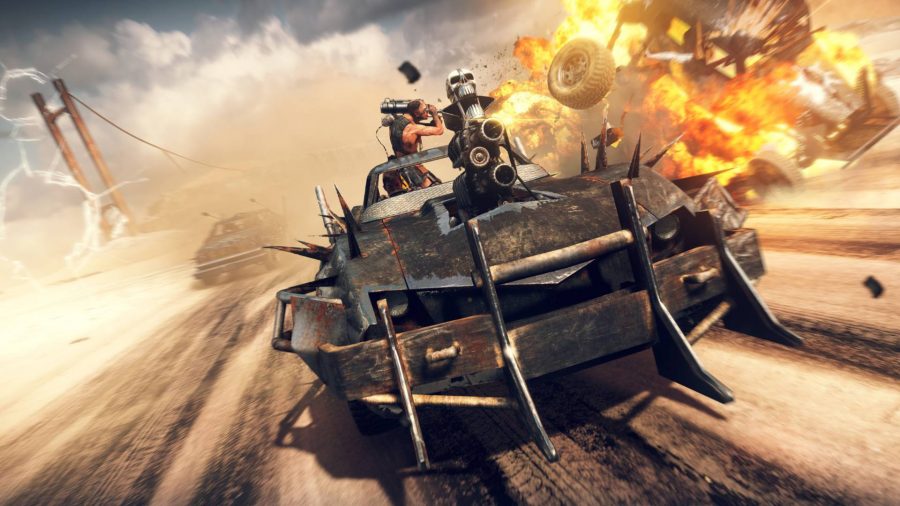 Games based on movies are rarely more than passable, let alone good, and while Mad Max wasn’t ‘game of the year’ material back in 2015 (when it had the misfortune of launching alongside Metal Gear Solid 5: The Phantom Pain), it’s garnered a cult following in the years since, thanks to its spectacular scenery, white-knuckle car combat, and chilling sense of loneliness.

Despite launching in the same year, the game doesn’t follow Fury Road’s plotline. Instead, Mad Max presents the player with the Ubisoft open-world games template of activities to complete, from liberating outposts to hunting down bounty targets. Where it differs is in vehicular combat, which forms a surprisingly large component of the overall game.

Upgrading Max’s vehicle (the Magnum Opus) is paramount to success, as many battles revolve around firing from the vehicle and tearing components off of enemy cars. The car is an RPG system in itself, and each customisation option offers both positive and negative traits – which makes the upgrade tree feel like a see-saw of min-maxing and tough choices. Roaming around the vast, sandy wasteland of Mad Max in your carefully modded murder wagon is what apocalypse games are all about. 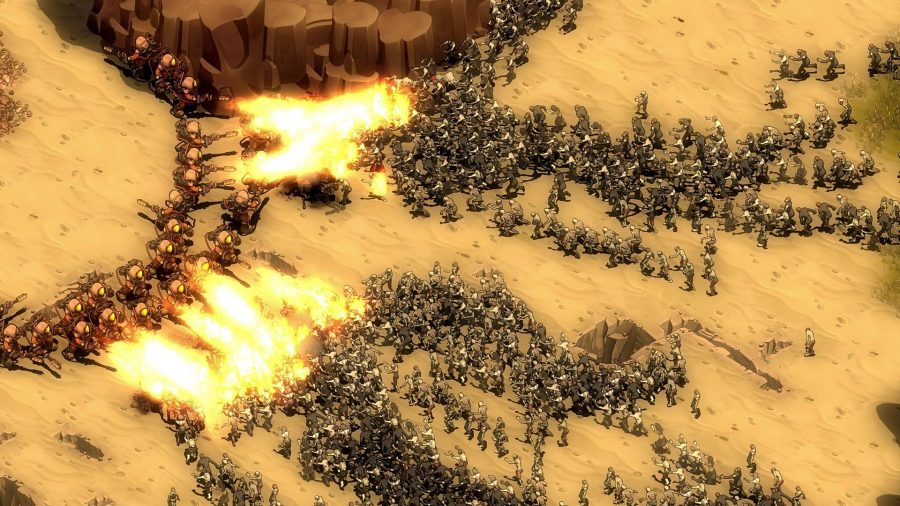 Set in a steampunk post-apocalypse, They Are Billions is a strategic colony sim where you’re charged with defending the last vestige of humanity against an infected horde that grows larger each and every passing day. You’ll start off with a few units defending an agricultural outpost and quickly establish a walled city with elaborate outer defences that steer the undead horde through as many traps and turrets as you can squeeze in. Let just one infected into your city and you’ll watch in horror as the settlement turns in a matter of seconds. If you’re looking for strategy games with a serious sense of dread then They Are Billions is for you. 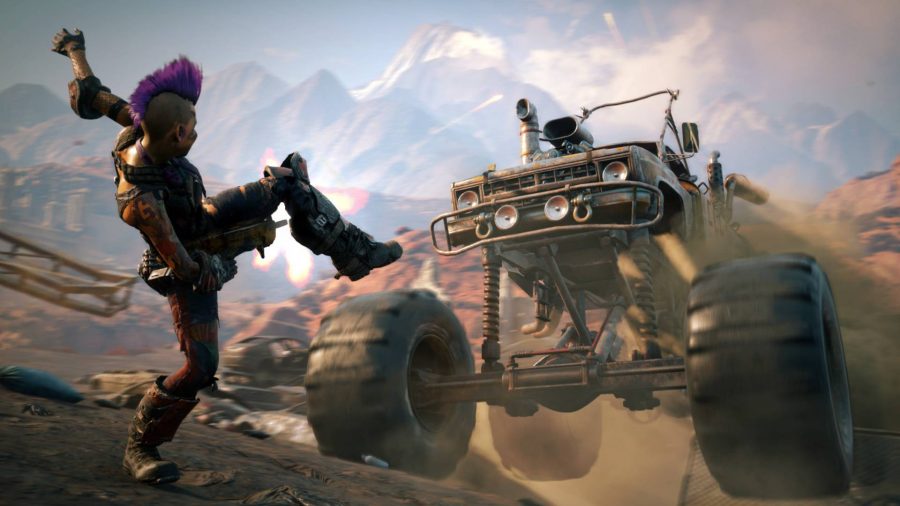 Remember the original Rage? Many won’t, with the game offering some stunning visuals but feeling nondescript in all other aspects.

id Software obviously felt that the IP had more to give, and partnered with Just Cause developer Avalanche Studios to offer a very different post-apocalypse FPS game for the sequel. For one, Rage 2’s world is full of punk-rock vibes, where spiky hairstyles are as common as machine guns, and then there’s the fact that you get mutant-bashing superpowers.

Rage 2’s open-world might not feature as many side quests and distractions as a Fallout game, but blasting an enemy off a cliff with a ‘force-push’ move, or beating a group of baddies into the dirt with an aerial ground pound is so satisfying it makes up for it. Thanks to id’s silky smooth movement and gunplay, Rage 2 plays more like a finely-tuned FPS game like Doom than an RPG or open-world game has any right to. 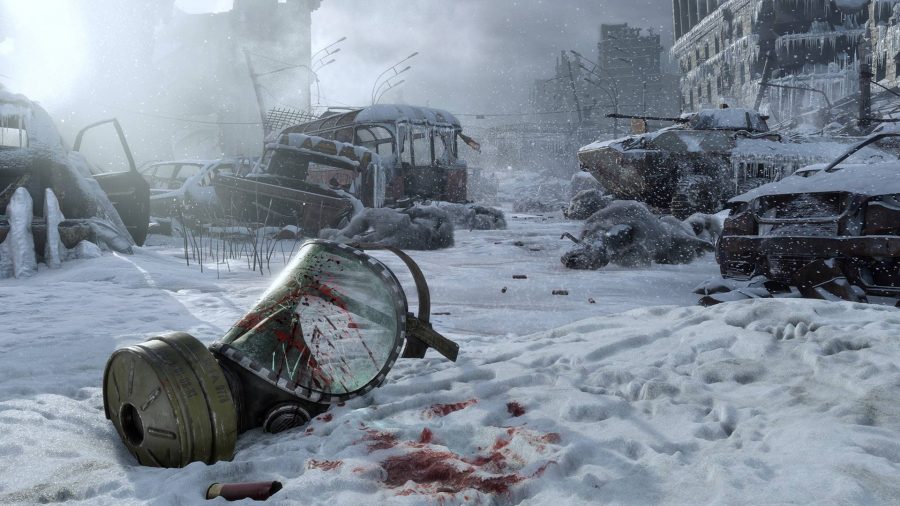 The latest in 4A Games Russian-set doomsday sim, Metro Exodus isn’t a game for the faint of heart. The world is a ruin following nuclear war, and survivors have been driven underground by radiation, not to mention some mutant nasties that roam above ground.

In Metro Exodus, you and a band of survivors leave the claustrophobic corridors and tunnels of the titular metro for a cross-continent expedition in search of a better life. The grey, cold architecture of post-apocalyptic Moscow is substituted for larger open areas with patches of verdant countryside that contrast with the bleak, dead underground of the previous games in the series. Your end-of-the-world Trans-Siberian adventure sees your ragtag band of hopeful survivors turn an old steam train into a mobile base, stopping off to scavenge supplies and fuel on your journey west.

Metro Exodus’ genius is in the way it knows when to pull back, when to let the player experience it’s open environments and when to offer combat scenarios that are challenging and varied. Thanks to Dmitry Glukhovsky’s haunting Metro novels, the world of Exodus is always richly detailed and unsettlingly realistic. 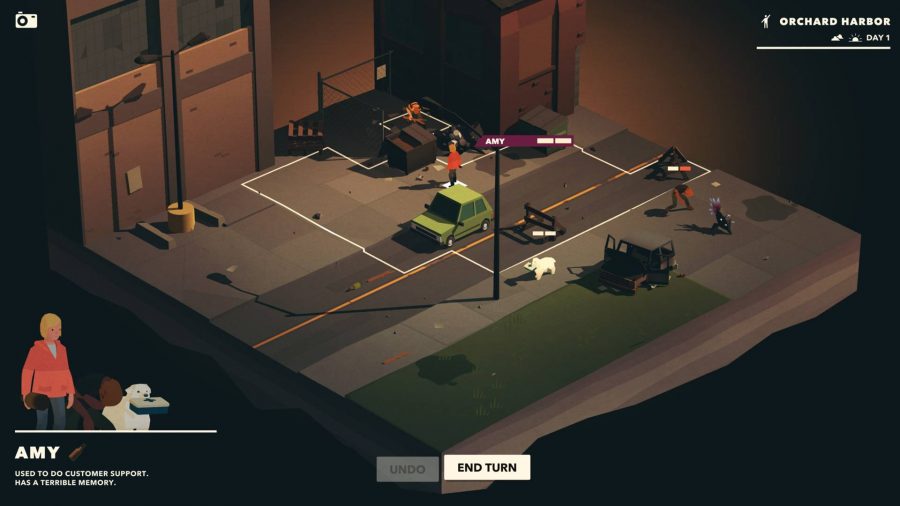 Overland is – perhaps more so than other apocalypse games – an exercise in futility. As you make your way across its minimalist landscapes, you’ll witness horrors that linger on in your subconscious long after you exit to desktop.

Just as you’re hunting for supplies, irradiated beasts do the same. Will you be able to rescue a new party member? What could it cost to do so? What if that new companion is an adorable dog. There are no guarantees in Overland, and it’s a better game for it.

Every decision feels like it’s made on a knife’s edge, and it’s a very fine line between success and failure. 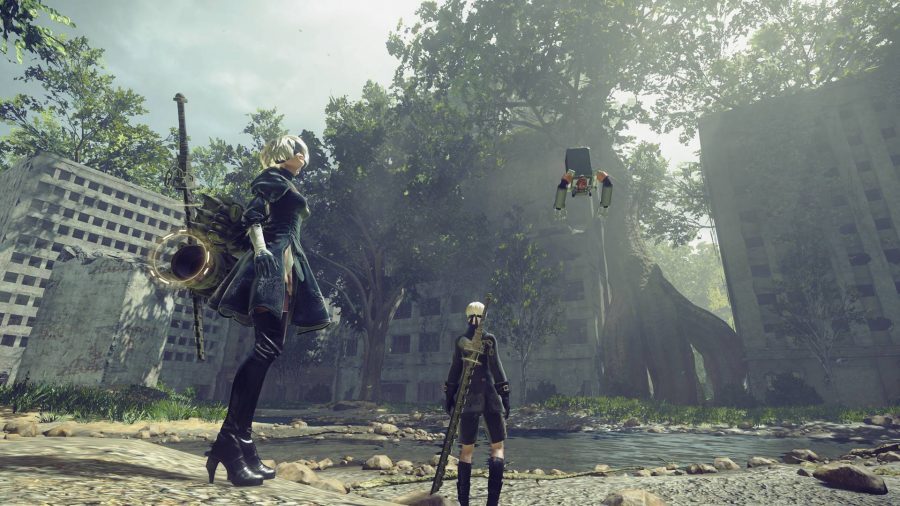 Intergalactic machine invaders is certainly a fresh take on an apocalyptic setting (at least in gaming), and Nier: Automata throws itself head first into the insanity of that narrative setup. Protagonist 2B is a combat android, one of many sent to wipe out the threat of the machines while mankind licks its wounds on the moon.

Combat is stylish and deep, while the game shifts genres from third-person action, to ‘shmup’, to platformer, and more – often within a single mission. That variety is also applicable to its endings, of which there are a staggering 26 variations.

All of this is to say nothing of the sumptuous soundtrack, where synths intertwine with mechanical percussion and classical themes to form one of the greatest musical videogame accompaniments of the last decade. All the best apocalypses have their own memorable soundtracks, after all. 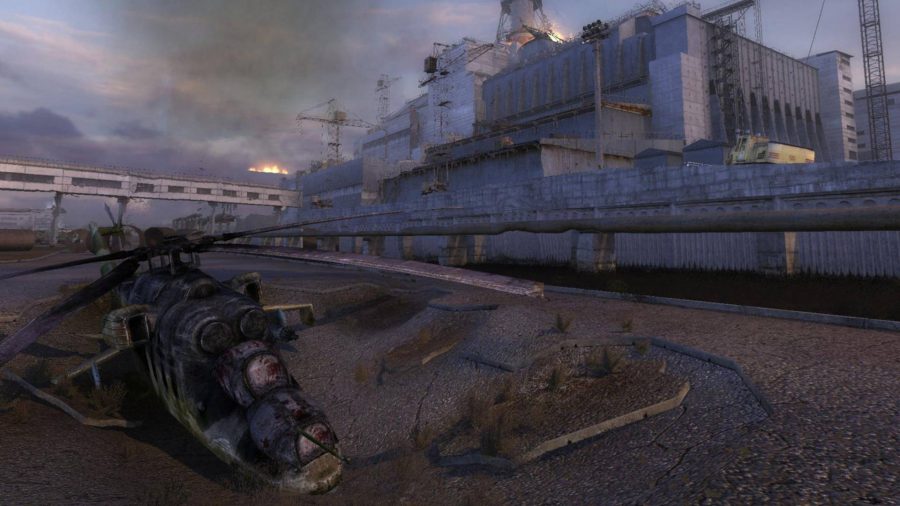 The franchise may have been dormant for a while (Call of Pripyat is now a decade old), but S.T.A.L.K.E.R remains a landmark achievement for misery-inducing post-apocalyptic videogames.

Its chilling version of a Chernobyl ravaged by a second incident – this time involving metaphysical forces – is dripping with atmosphere and a combination of radioactive beasts and limited supplies ensure every encounter is tense.

The result of the incident is a city full of monstrosities known as anomalies, with many entering the treacherous zone to seek items known as Artifacts that bestow special properties upon the user.

Even today, S.T.A.L.K.E.R. remains a supreme piece of survival horror, as players rush to stem bleeding or battle against radioactive conditions in between scrapes with other denizens of the city and the mutated monsters lurking around every corner. It’s tense, terrifying, and utterly brilliant.