I’ve been lusting after Compulsion Games’ off-kilter survival FPS, We Happy Few, ever since they revealed the trailer. From the Bioshock-meets-The Prisoner setup to the “Condemned in a country village” gameplay, We Happy Few looks like it will hit every checkbox on my list of favorite themes.

My time with a very early build at PAX at once confirmed and confounded my expectations. As much as I loved the setup and the aesthetic of We Happy Few, I was also taken aback by how instantly familiar and tired the survival and crafting elements felt. It was a strange clash between a new and exciting game world and the increasingly-familiar routines of stealth, open-world survival.

We Happy Few is disorienting and off-kilter from the start. The demo opened with my character jerking awake in some kind of fallout shelter, with copper pipes and battered old filing cabinets and tools jammed in every corner. Then the old tube TV set over a nearby desk flickered to life and a man in a suit with a partially-painted face appeared. His carefully groomed hair, enunciated line delivery, and clown makeup reminded me of Vincent Price crossed with Cesar Romero’s Joker on the old Adam West Batman series. He introduced himself as Uncle Jack, and invited me and everyone else getting the broadcast to play a nice game of Simon Says.

With that done, I had a few minutes to scavenge around my shelter and prepare some items at a nearby crafting table. This part was all very familiar as I put together a basic survival kit of purified water, a few medical supplies, a few lockpicks, and a crude weapon. Then I climbed the ladder to the surface and emerged in a lush park in the center of an idyllic English village.

While the isolation in an English country village echoes The Prisoner, Compulsion say that a more direct influence is the Terry Gilliam-directed nightmare vision of English authoritarianism, Brazil. 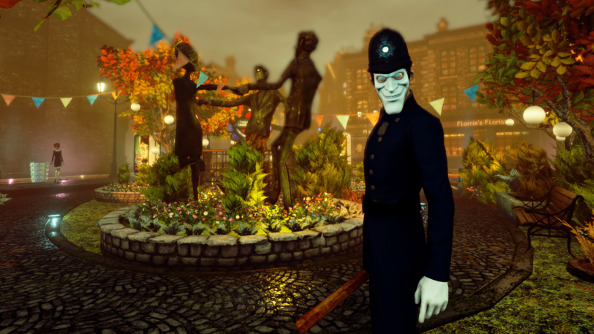 That influence was clear the moment I stepped onto the surface and watched a hulking police officer, with a partially-painted face like everyone else in Uncle Jack’s little utopia, intercept a terrified-looking man and clothesline him in the throat with a heavy truncheon. The man fell to the ground dead, as the officer doffed his bobby cap at me and remarked, “Lovely day for it.” Like in Brazil, this is a world where everything has fallen through the looking glass, and your character is the only one who seems aware of it.

That’s not a given, though. There’s Joy all around you, and not in a warm and fuzzy Yellow Submarine kind of way. It’s a chemical substance that’s in all the food and drink that the twisted, funhouse-mirror villagers consume. It will affect your character as well: if you don’t take care to get purified sustenance, you’ll start to fall under Joy’s influence and become more and more like the people around you.

On the other hand, behaving like them is good camouflage. Since everything is all hunky-dory in this town, people expect to see their fellow citizens going about the enjoyable humdrum of routine. Nobody will raise an eyebrow at you if you sit on a park bench, taking in the scenery, or visit a nauseating little shop on the main drag. 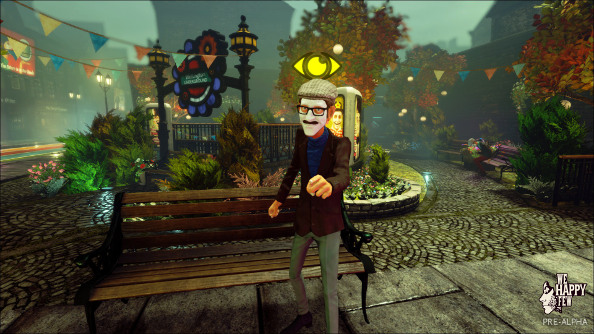 What people don’t expect to see is someone a little too interested in anything, or in too much of a hurry to get somewhere. Showing purpose is a call to the hunt. It will attract the suspicion of villagers and especially the bobbies. So surviving in We Happy Few is about fulfilling needs and goals while seeming not to have any. The means acting like another zonked-out automaton in public, and then breaking into homes and scavenging for supplies when people can’t see you.

And this, by the way, is where I could feel my interest starting to wane. While the style and menace of We Happy Few is top-notch, I’ve already done my share of “survive the apocalypse as envisioned by /r/britishproblems” in Sir, You Are Being Hunted. I quickly started to feel like I was being punished for wanting to look around and do things.

Because doing absolutely anything of interest draws aggro from the villagers, and eventually a bobby notices and brings his massive stack of hit points and billy club into the fray and puts an end to you. Then you reload and try again.

I think my struggle with We Happy Few was that it looked really imaginative and menacing, but the pressure of the survival elements, and the unremitting hostility of the world, kept pushing me away from the things I wanted to explore. Imagine if there were always more Splicers milling around in Bioshock, or if the guards in Dishonored followed completely random patrol routes, you couldn’t fight them effectively, and there were dozens more of them. And you had to constantly stop to collect garbage and turn it into something useful. 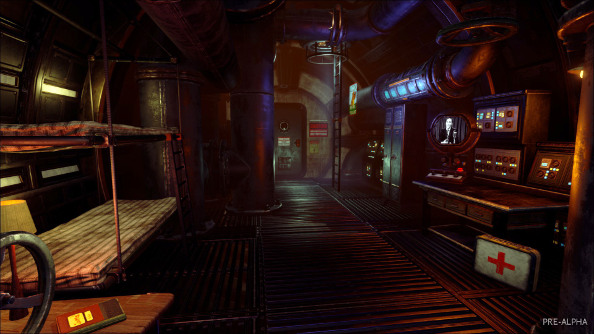 Survival games tend to be almost entirely about survival, which can be really powerful and compelling in certain scenarios. The desolate desperation of The Long Dark is perfect for a game that’s entirely about finding your next meal, your next warm shelter, you next moment’s rest. It’s great at making overly-familiar settings, like the zombie apocalypse, and making them fascinating procedurals about keeping a group of survivors alive and together. But I’m not sure those quotidian objectives are as interesting in a setup like We Happy Few’s.

Still, it’s early. The developer showing me the game explained how the build at PAX was more a prototype than anything, and most of the features I saw were incomplete. The procedurally generated village layout was incomplete and fairly crude, and there will be far more behaviors that villagers will exhibit (and more ways you can effectively pass yourself off as one of them). There’s also an entirely different kind of environment that functions as the photonegative version of Uncle Jack’s perfect English village. This location and its role in the game is not clear yet, but from some concept art it looks much more like an abandoned, dead England after years of neglect.

So there is tons of room for We Happy Few to grow. Compulsion plan on putting the game on Kickstarter in the near future, and then putting the game through its paces on Early Access as they add more features. I’m hoping that the demo’s overwhelming focus on bare-bones survival gives way to a slightly richer narrative experience in later versions. I liked playing as the lone sane person in a world gone mad, where simply existing gave me the choice between being poisoned senseless or beaten to a pulp. But I also hope that I get a greater purpose in the game than “simply existing.”