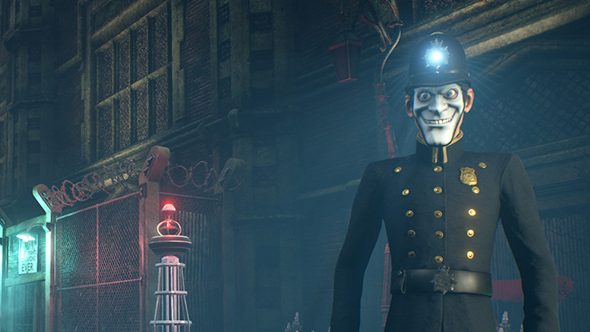 Update, January 19: We Happy Few has been delayed to summer, and you won’t be able to buy the Early Access version starting next month.

We Happy Few was scheduled for release in April, but it’s now been delayed to a non-specific “summer” date. That’s in an effort to apply some old-fashioned polish to the game, which according to the developers is now content complete and playable from beginning to end.

Take some Joy and check out the best sandbox games on PC.

Developers Compulsion Games first announced the original We Happy Few release date back in August, along with news that it was to be published by Gearbox and would have its scope expanded to be comparable to a full retail game. The price increase that accompanied that announcement was met with some criticism, especially since the game was already available in Early Access and would not be getting any additional updates until the final release.

To that end, the developers are enabling refunds for Steam players, regardless of playtime or date of purchase. They’ll also be disabling Steam purchases altogether as of February 1, and won’t be allowing Early Access purchases – or pre-orders, as the case may be – until the game approaches its actual release date and more details on what the final product consists of are revealed.

Original story August 16, 2017:Today, Compulsion Games made several announcements regarding We Happy Few. The Early Access game now has a release date, April 2018; a publisher, Gearbox; and an increased scope, which the devs have been working on for some time. It’s also getting a full retail release and a price tag to match.

First, there’s the increased price. Early Access games typically become more expensive around launch, and We Happy Few won’t be an exception as it’ll jump up to a not insignificant $60. The increased cost also comes with an expanded scope, however.

“After we launched on Early Access, we were approached by Gearbox,” Compulsion Games explain in a Steam post. “They basically said to us, if we can make a game like that, then they thought we had a good shot at a retail game. We felt that in order to do that, we needed to reinvest and make the game bigger – as you can well imagine – and so that is what we have been working towards for almost a year. It’s why instead of spending 6-12 months in Early Access, it’s going to be closer to 20.”

The result, Compulsion promise, will be a full-sized retail game, though I have no idea what size has to do with selling physical copies of a game.

“The game that we’re planning to ship in April is roughly 2.5x the size of the Life in Technicolour Update (which has just gone live) in terms of pure content, and we’re confident that we will meet the quality and scope expectations that you guys have,” Compulsion continue. “And we’re still confident that We Happy Few is going to be unlike anything you’ve seen. Although it’ll probably, inevitably, still be compared to Bioshock.”

Along with a retail version, Compulsion are dipping their toes into other conventions, such as pre-order bonuses and, ugh, a season pass, a decision they defend in the post.