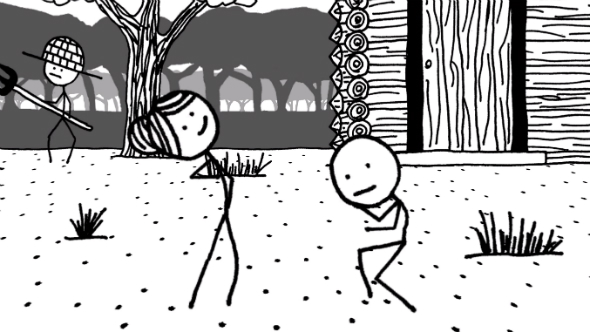 I’m on a pretty standard RPG mission: go to a place, kill everyone there, grab a thing, and return it to its rightful owner. I enter a cave that a group of bandits are hiding out in and spot a young bandit sleeping in a tin bath. Upon approaching the bath, a box pops up detailing the various ways I can deal with the situation. I pick the first option, and chuckle awkwardly as I read the resulting monologue, which describes in great detail how I’ve just willingly drowned a boy. The text is dark, morally anguished and full of regret, and yet on screen there’s a stetson-wearing stick figure, grinning innocently away. This contrast is very much intended, and it’s exactly this vein of humour that West of Loathing mines so consistently.

Love branching quests and character builds? Check out the best RPGs on PC.

If the game’s title strikes a familiar chord with you, that’s because its MMORPG predecessor Kingdom of Loathing was one of the biggest BBS games of the early 2000s, winning the favour of countless bored humans toiling away in IT suites with its surprising level of depth. It’s an audience developers Asymmetric Publications are hoping to win over once more with West of Loathing, a slapstick RPG set in the Wild West that they’re saying is basically Skyrim with stick figures.

That stick-figure aesthetic might lead you to believe that West of Loathing is a crude, browser-based game that you’d expect to find on Newgrounds – but the level of polish is actually very high. Everything in the game looks makeshift, but from bespoke animations for background details you’d probably never notice to the comically childish character art, it all shares the same visual DNA. For a side-scrolling, point-and-click RPG with a doodle aesthetic, West of Loathing has all the detail and refinement of its only triple-A point of comparison, South Park: The Stick of Truth.

West of Loathing’s comedic sentiment is more gently paced than the crass remarks and gross-out set pieces which sustain South Park. Humour comes from the uneasy contrast between serious context and silly reality, like the aforementioned drowning incident. West of Loathing constantly deals with situations that feel grim or weighty, but revels in the fact that what’s playing out onscreen looks sweet and cartoony. 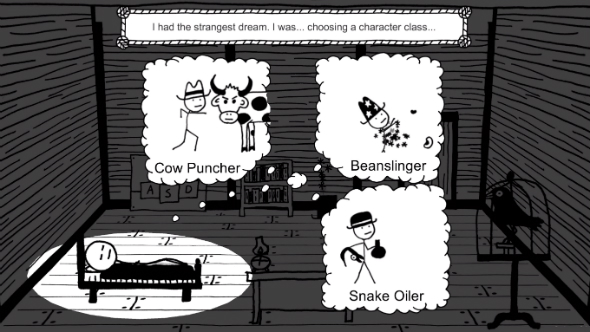 More conventional jokes are littered throughout the world, which you’ll either stumble across or actively seek out by examining objects and exploring every avenue of dialogue. Most are dumb, and knowingly so, but they add to the charm of the game. Others are moulded into the RPG elements themselves, like the Moxie stat or only being able to acquire needles by searching haystacks – the former tidbit elicited a smirk during my playthrough, the latter earned a hearty guffaw.

Even character classes are ridiculous. You choose between Cow Puncher, Beanslinger or Snake Oiler. They’re just clones of well known RPG builds like warrior or rogue that have been given a lick of humour: Beanslinger, for example, fires magical beans at the enemy instead of spells.

The greatest surprise though, is how deep West of Loathing’s combat and RPG systems are. Your first few fights will seem rudimentary and bland because of the lack of stats, items and buffs at play, but after even half an hour the turn-based combat becomes a tense affair of resource management and risk-reward decisions. Not many RPGs let players walk up to their foe, pour gasoline on them and set them ablaze – it’s a reckless use of very valuable resources like matches and fuel, but it’s also an efficient way of dealing with the game’s toughest enemies. 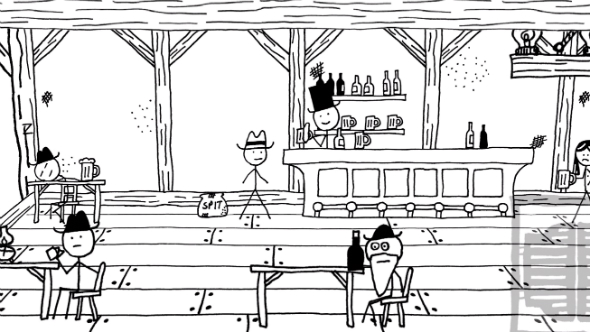 The same flexibility is true of West of Loathing’s quests. There are few instances where you’re only provided with one dialogue option, and likewise, almost every quest in the game can be completed by adopting a number of different approaches. Not to keep dragging myself over the coals for drowning a teenager in a game, but I discovered that had I not killed the boy, he would have woken up and made a subsequent fight with some sarcastic bandits much, much more difficult.

That the now thirteen-year-old Kingdom of Loathing is still making Asymmetric Publications money is testament to the staying power of that game’s systems, rather than its more immediately noticeable art style. From what I’ve seen and played of West of Loathing, it’s clear that there is enough complexity there to please hardcore RPG fans and see players who were initially drawn in by the humour and unique aesthetic staying long after their charm has worn off – if it wears off, that is.